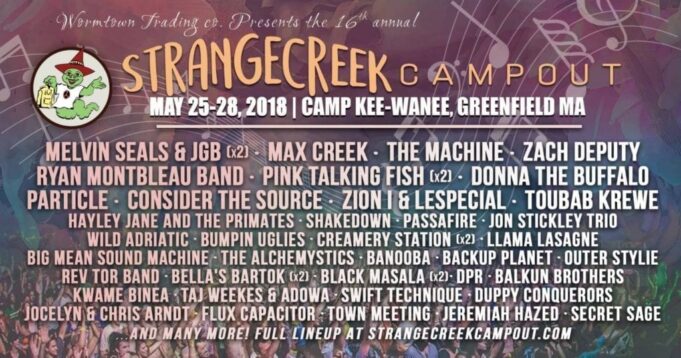 StrangeCreek Campout Returns to Greenfield, MA for 16th Year The family-friendly event, hailed as the kickoff to to festival season in the Northeast, will once again take place over Memorial Day weekend at Camp Kee-Wanee in Greenfield, MA from Friday, May 25th till Monday, May 28th. To submit a review or story for consideration hit us at [email protected] Check out the Live Music News and Review.com Facebook page for updates and announcements. The 16th Annual StrangeCreek Campout makes its return to Camp Kee-Wanee in Greenfield, Massachusetts over Memorial Day Weekend beginning at 9 AM Friday May 25th and concluding on Monday, May 28th, 2018. Widely regarded as the kickoff of festival season in the Northeast, StrangeCreek will feature Max Creek, Melvin Seals and JGB, Pink Floyd tribute The Machine, Zach Deputy, and Ryan Montbleau Band as headliners this year. Tickets are $140 for a weekend pass (free for attendees 15 and under!) until May 13th at midnight and can be purchased at this link. 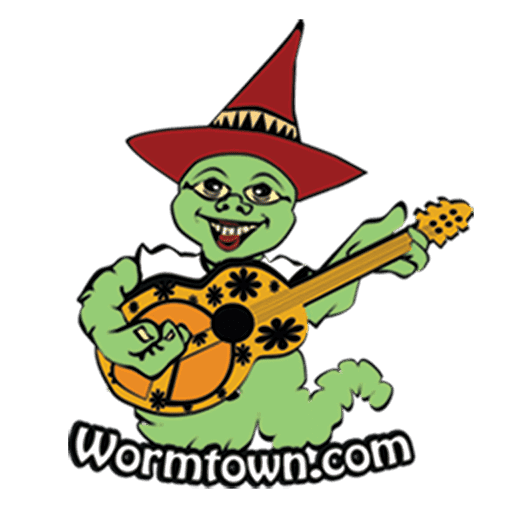 Now in its 16th year, StrangeCreek campout features three nights of wooded camping and music. Music takes place on three stages and two cabins continuously throughout the weekend. Always a family-friendly event, family camping is an option with kids-centric entertainment as well as a “Teen Scene.” Other points of interest are the community bonfire, the Fire Wormz Fire Show, the Holistic Village, group yoga, and the Strangers Helping Strangers Food Drive. Early birds can purchase a pass for Thursday night and catch cabin sets from “jamericana” rice: an American Band, blues-roots outfit August First (their debut at StrangeCreek), Gratefully Yours (an all-star tribute to the Grateful Dead), and Allman Brothers/Dead hybrid Steal Your Peach. In addition to the aforementioned headliners, StrangeCreek welcomes two sets of Pink Talking Fish (seamlessly performing the music of Pink Floyd, Talking Heads, and Phish), roots-fusion mainstays Donna The Buffalo, jambands Particle and Consider the Source, a collaboration between hip-hop dup Zion I & “future groove” group Lespecial, Toubab Krewe, Hayley Jane and the Primates, Shakedown, Passafire, Jon Stickley Trio, Wild Adriatic, Bumpin Uglies, Creamery Station (2 sets), Llama Lasagne, Big Mean Sound Machine, The Alchemystics, Banooba, Backup Planet, Outer Stylie, Rev Tor Band, Bella’s Bartok (2 sets), Black Masala (2 sets), Danny Pease and the Regulators, Balkun Brothers, Kwame Binea, Taj Weekes and Adowa, Swift Technique, Duppy Conquerors, Jocelyn & Chris Arndt, Flux Capacitor, Town Meeting, Jeremiah Hazed, Secret Sage, Woody & the Rebel Alliance, William Thompson Funk Experiment, The Kings, Auguste & Alden, A-Bombs, Analog Heart, Born IV Blues, Christopher Jacques Trio, Desert Rain, Dr Rick, EZOTMY, Gary Backstrom Band, Jabawaukee, John Spignesi Band, Keepers of the Vibe, Legion of Jerry, Leon Trout, Long Arm Rex, The Marks Brothers, Melting Nomads, Mundo’s Crazy Circus, Northeast Traffic, Rebelle, Rhythmic Circus, rice: An American Band (2 sets- including a cabin debut on Thursday night), Shantyman & the Speakeasies, The Stupid Robots, Swimmer, Tales of Joy, Terrafunk, and The Trichomes. Whew! Have you got all that?! If that lineup alone hasn’t convinced you to buy your presale tickets, let’s take a little time to talk about the headliners. . . audio from Max Creek’s 2017 StrangeCreek set (use arrows to toggle back and forth between songs): Now in their 47th year, venerable jamband icons Max Creek have been small, big, regionally-huge, medium, and any other size one can think of; they’ve never graced the cover of Rolling Stone, but you’d be hard-pressed to find a music fan in the Northeast that hadn’t heard of them. Max Creek are true pioneers of the electric rock jam, with four decades of experience launching musical adventures with a rich repertoire of originals and uniquely interpreted gems. Each set is a journey for audience and band alike, chasing muses without a net and bringing it all back home to the roots again. They’ll be performing on the main stage on Saturday night beginning at 8 PM. From the YouTube channel of gerryjdvideo:  https://www.youtube.com/watch?v=fsIC07nIepY Melvin Seals has been a powerful presence in the music industry for over 30 years with a long-established reputation as a performer, recording artist and producer.  Melvin is most revered for his powerful, high-spirited, Hammond B-3 organ, and keyboards in the Jerry Garcia Band. Melvin spun his B-3 magic with the Jerry Garcia Band for 18 years and in doing so helped pioneer and define what has now become “Jam Band Music”.  From blues to funk to rock to jazz, Melvin Seals serves up a tasty mix with a little R&B and gospel thrown in to spice things up. In addition to the often-played staples, the band has recently been exploring the back catalog and performing a ton of super rare tunes, some of which The Jerry Garcia Band played only a few times over all those years. They’ll dazzle Worms on the main stage on Friday at 9:30 PM.

The Machine, America’s top Pink Floyd show, has forged a 30-year reputation of excellence, extending the legacy of Pink Floyd while creating another legacy all their own. Over the years, The Machine has touched the hearts and souls of many, selling out theaters, large clubs and casinos across North and Central America, Europe and Asia. They have also appeared at renowned music festivals such as Bonnaroo, Riverbend, Gathering of the Vibes, Buffalo’s Artpark, and Germany’s Rock of Ages. The New York-based band focuses on making every show an authentic Floydian experience for their fans. Known for performing a diverse mix of The Floyd’s extensive 16-album repertoire (complete with faithful renditions of popular hits as well as obscure gems), The Machine’s stellar musicianship, dramatic lighting and video, and their passionate delivery sets them above and beyond the rest. They’ll melt faces on the main stage on Sunday starting at 8:30 PM. From the YouTube channel of gerryjdvideo:  https://www.youtube.com/watch?v=eYOg46vIum4 Zach Deputy is a multi-instrumentalist and songwriter based in Savannah, GA and best known for his live looping shows. He describes his style as “island-infused drum n’ bass gospel ninja soul.” In reflecting on his path as a musical artist, Deputy likens that creative awakening to the message at the heart of his song “Wash It in the Water.” “That song’s about cleansing yourself from all the nonsense of the world-starting fresh, a rebirth of sorts,” he says. And whether performing live or creating new music, Deputy aspires to guide listeners toward a renewal of their own. “I try to give people a little soul massage,” he says. “In music you get so raw and make yourself naked to the world, and hopefully people can find themselves in that and realize they’re not alone. For me touching someone’s life in a positive way is the best thing about making music, and that’s what’s kept me going with it for all these years.” Zach Deputy will play the main stage before Melvin Seals and JGB on Friday from 8-9:30 PM. And last but certainly not least. . . https://www.youtube.com/watch?v=hzbEGbI3JFo Songs for Ryan Montbleau typically need to simmer. In his 10-year career this gifted singer and his limber band have built their catalog the old-fashioned way, by introducing new songs to their live set, then bending and shaping them over dozens of performances before committing a definitive version to the hard drive. He and his band have been a mainstay at StrangeCreek in recent years and this time around is no exception. He recently released his latest album I Was Just Leaving, recorded after visiting New Orleans, and has formed a duo with Hayley Jane of Hayley Jane and the Primates called Yes Darling. Ryan Montbleau will play before the Machine on the main stage on Sunday from 7-8:30 PM. New acts to join the StrangeCreek fam are the Battle of the Bands winners, hailing from all corners of New England: Doctor Rick, Long Arm Rex, Northeast Traffic, and Tales of Joy will all be performing at the festival- Burlington, VT-based band Doctor Rick will play on the Riverworm stage on Friday. Traveling from Providence, Northeast Traffic will perform in the Wormtown cabin for a late night set on Friday and Tales of Joy will play in the Keewanee cabin also on Friday night. Long Arm Rex will play in the Keewanee cabin late night on Saturday. Let’s hear about some more newcomers to StrangeCreek! Philly-based funk band Swift Technique will also play a late-night cabin set in the Wormtown cabin on Saturday night. This horn-driven, female-led band has more grooves than you shake a booty at- be prepared to dance. Hailing from upstate New York, Harvard-educated blues-rock sibling duo Jocelyn and Chris Arndt will debut on Sunday on the Vernville stage beginning at 4:15 PM with their band. Think Jack White, Fiona Apple, and a bit of Alabama Shakes. You will most assuredly be blown away by Jocelyn’s voice. Taj Weekes and his band Adowa also will play StrangeCreek for the first time- from the Caribbean island St. Lucia by way of New York, Taj and his crew provide socially-conscious reggae and we’ll get our chance to see them on the main stage at 11 AM on Sunday morning. StrangeCreek would like to emphasize how family-friendly the festival is. Not only is there a family-specific camping area, but there’s even a singalong on the main stage for children who’d like to participate in the music of the weekend! That all will go down on Sunday from 12-12:30 PM. 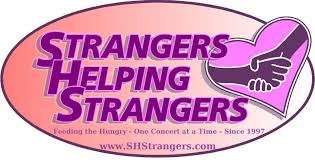 A big part of StrangeCreek is the Strangers Helping Strangers charity drive. SHS is a non-profit organization of music fans dedicated to holding food drives at concerts throughout the nation, benefiting those in need in each community an event is held. The origins of Strangers Helping Strangers (SHS) dates back to late 1997, when two fans of the Burlington, Vermont-based band Strangefolk, Kat Harless and Tina Campbell, saw an opportunity to help those less fortunate by collecting non-perishable food at various Strangefolk concerts throughout the Northeast and donating it to food banks and charities in the cities and towns Strangefolk played. The first official food drive was held in 1998, and since then SHS has collected items for charities all over the country. EVENT INFO 16th Annual StrangeCreek Campout May 25-28th, 2018 Camp Kee-Wanee, Greenfield MA StrangeCreekCampout.com Gates open 9am Friday, May 25th Ticket link Tickets are $140 until May 13th at midnight Rules: No glass No dogs (Service dogs must be registered) River access in designated areas only! Shade tents on the main field must be put away by sundown To submit a review or story for consideration hit us at [email protected] Check out the Live Music News and Review.com Facebook page for updates and announcements.