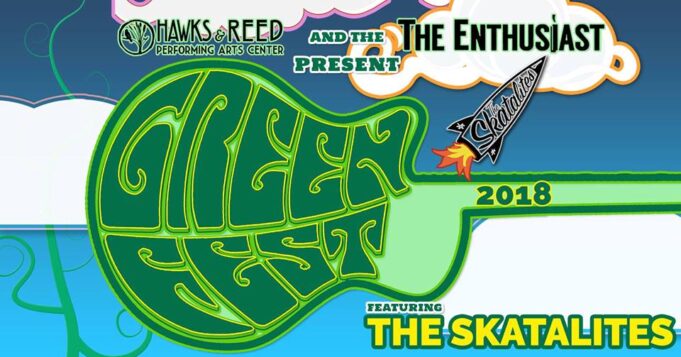 It’s a good possibility that a new tradition for April 20th has been created for Greenfield, MA.  Hawks and Reed threw a Green Fest and brought in both the best regional jam, world and reggae performers on one show, and anchored the whole thing with the most historic reggae and ska performance group of all time, the Skatalites. I arrived in time for the end of the set by local reggae favorites, The Equalites.

The lineup was somewhat new with Peter Kim on bass and a new drummer I didn’t recognize who I now know is Chris Ellis (The Black Rebels),  joining Edward El Rojo on guitar and of course band leader David Boatwright on guitar and vocals.  The band was tight, and the crowd was already quite good for that time of night-  I don’t expect a full room in Greenfield at 8PM usually.  I was really glad to not have missed the Equalites, and I was rewarded with a great sound, if even for only 10 minutes or so due to my late arrival: Two songs by the Equalites, switch between them with the arrows below:

Up next came Dave Noonan, and his exceptional band Green Island.  The ensemble took the stage and was less than the 14-15 member behemoth that I’ve seen from them before, but still a big band with horns, guitars, singers, and their accompanying big sound.  Dave and his band are doing something that nobody else in the region is doing- bringing together elements of jazz and world music in an upbeat way.  The material is both educational- a lot of these songs would not be selections that the average, or even the avid music fan would know.  The material ranged from interpretations of classic rock in Bob Dylan’s Knockin on Heaven’s Door to the logical choice of a deep cut from the Skatalites, to interpretive that takes songs and filters them through the lens of Noonan’s experience and rhythmic knowledge coupled with the spotlight he is able to put on his highly talented players.  Their set covers such a wide array of sounds and influences it is as if the listener on a global excursion, one that is very enriching, and musically inspiring to the audiences feet.

Full show audio from Green Island, use the arrows to toggle between songs:

Throughout the night, the main floor ballroom never totally rested as Camilo and his I-Ganic sound system brought the concept of traditional Jamaican sound system to the show-  loud, with shoutouts and a mix of Jamaican music.  For those who wanted a different sound, the Wheelhouse was open with a small marketplace for The Enthusiast, the local smoke purveyor who sponsored the evening, and a performance by several performers including local jam rockers the Diamondstones.

To headline the night, Jamaican legends The Skatalites took the stage.  This band is celebrating their fifty-fourth anniversary here this year, and the assemblage of players is a gathering of the best Jamaican musicians in this genre and with amazing American musicians who were influenced by their early works.  With a band that is that experienced and lengthy in their history, the normal debates and thoughts about ‘original band members’ is usurped by a recognition of the march of time and the limits of the human lifespan.

Full audio of the Skatalites below, use the arrows to toggle between the songs:

The band is mostly led or hosted by keyboard player Ken Stewart- who, while not an original member, is himself in his thirtieth year as the band’s keyboard player.  He acts as host, plus Skatalites and Jamaican music historian as he introduces players, songs and their place in the history of this music.  But he’s also an enthusiastic performer, at one point coming from behind his keyboard to demonstrate several crazy ska dance moves center stage, belying the number associated with his most recent birthday.  He was leaping and whirling his arms, like some pit-defying rude boy. He shares a bit of the hosting duty with Natty Frenchy who plays guitar and also leads some of the crowd enthusiasm duties.

The horn section is a next generation of musicians who have been bathed in this music and culture, and the resulting sounds from sax, trombone and trumpet supply the essential and necessary horn accompaniment that creates the sound that is the Skatalites.  Horn lines and solos dotted each song, not a mere add-on to the show but an essential part of the rhythmic and harmonic movements of the band.

Midway through the set, original member and singer, Doreen Shaffer came to the stage.  The audience treated her with all the reverence and respect you’d expect for a band member who has spent over half a century with an historic band.  She played some six or eight songs, and was able to really steer the band vocally.  She even showed her own reverence for the audience by saying “Without an audience, there would be no show…”  As she was leaving the stage even a couple of rude boys in attendance got down on their knees as she descended, showing their respect for the Queen of Ska.

The rhythm section that is comprised of Sparrow Thompson on drums and Val Douglas on bass is unmatched, perhaps the best combination on tour.  They represent their native Jamaica with class and proficiency and both are very quiet people offstage.  On stage, they are the foundation of the band.  Douglas has played bass on an amazing amount and variety of records out of Jamaica from Marley to Tosh to the Abyssinians.   The solo break that they took was a lesson in bass and drums- several minutes of methodical soloing by each, together and separately.  They are an incredible pair to watch and worth the price of admission for any true music fan. After nearly two hours you would think that the band was done but came back for a multi song encore including bringing back Doreen Shaffer.

The crowd in Greenfield was more than sated with the twenty songs that the band performed on that night, and the band promised to be back in September. Any and every fan of reggae, ska or world music  should take advantage of the fact that this great band is still out on the road.  There are more dates in the northeast in Spring (Ocean Mist RI, New Bedford MA, Boston, and Portland are all on the schedule- check out their website for all the info) and the band will continue to tour the globe as they have for many of the last fifty four years.