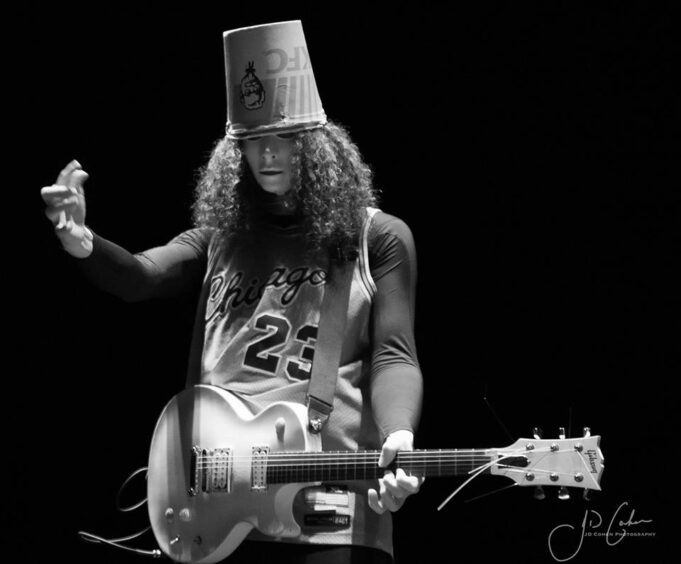 Feeling the Flow in the Wonderful World of Buckethead

Brian Patrick Carroll, known professionally as Buckethead is one of the most enigmatic performers in in rock history. Since 1988 when Carroll first made his appearance he has rarely been seen without a Friday the 13th Michael Myers-like white mask and a Kentucky Fried Chicken bucket on his head. In addition to being one of the most odd and mysterious artist on the rock scene for some 30 years , Buckethead also happens to be one of the most creative, prolific and gifted guitar players in the history of the instrument. Buckethead was voted number 8 on a list in GuitarOne magazine of the “Top 10 Fastest Guitar Shredders of All Time” and has released over 300 studio albums and performed on more than 50 other albums by other artists. He has performed with countless musicians including a stint with Guns N’ Roses from 2000 to 2004. These days you will find him on tour performing solo to a backing track of his own creation.

Last Wednesday night April 11 Buckethead played to a packed house at the MET in Pawtucket Rhode Island. On a strikingly sparse stage with only two amplifiers, a single guitar and a few peddles and effects, Buckethead ran through a variety of material that included stunningly beautiful guitar compositions, heavy metal guitar riffs, high-speed shredding and a country hoe down (“Hog Bitch Stomp”). The theme from Star Wars, Charlie and the Chocolate Factory and It’s a Small World were also thrown in for good measure. Throughout the musical onslaught Buckethead’s mastery of the guitar was on full display. The MET only holds a few hundred people and has a small stage allowing fans to get very close during the performance.

The intimacy of the room only made the exhibition that much more impressive. Buckethead is tall and athletic, and on this tour he has been dressing in his familiar Michael Jordan jersey, black sweat pants and size 13 Converse Chuck Taylor sneakers.  He has tremendous hands and his fingers move up and down the fretboard with lightning speed. But his playing is also extremely economical with very little wasted movements or gestures. Equally remarkable to Buckethead’s technique is his extraordinary guitar tone. The sounds coming from his guitar are incredibly clean and vibrant even when he is shredding some primeval noise. The backing tracks add a surprising fullness to the performance that wholly complement his guitar work in a way that is hard to imagine a live band being able to reproduce. On a dark empty stage the audience is transfixed only on the musician and his guitar for nearly two hours. Aside from a quick set break, the only pause in the furious show of talent comes when Buckethead allows fans to participate.

From the video channel of Fan Attic:

Passing his guitar around Buckethead allows fans to take turns hitting the kill switch button on his signature white Gibson Les Paul. Fans tap the rhythm while Buckethead hammers out the notes on the neck of the guitar.

A second break comes when Buckethead reaches for a large bag of toys that he hands out to the audience, periodically also taking gifts that fans have brought with them. The gift-giving doesn’t stop until every toy is handed out one by one like Santa Claus on Christmas. There is also a short demonstration of Buckethead’s nunchuck skills, which are impressive but a somewhat random interlude. Somehow it all works as if in addition to a rock show you’re being treated to an intimate look into the private fantasy world Buckethead has created for himself and invited you to join. There is definitely a touch of Pee Wee’s Playhouse to a Buckethead concert and all the serious virtuosity is presented in a very playful and good-humored fashion. But behind the mask is clearly an intense, sensitive and complicated man.

In a rare interview on the Coming Alive Podcast from 2017  Carroll talks openly about performing, his struggles with anxiety, stage fright and the origins of his costume. The mask he wears allows him to see little of the audience and insulates him from the outside world. Performing in costume also allows him greater freedom offstage. Since few people know what he looks like he is free from many of the constraints and challenges faced by other rock starts and celebrities.

During the interview Carroll also revealed some major life challenges-including the death of his parents, a back injury, and a serious heart condition. He has used all these difficulties as a vehicle to improve his playing and infuse his music with more feeling. Although Buckethead never directly addresses the audience during his concerts he communicates volumes. Without words Buckethead draws you into his animated funhouse world and it was especially palpable in the intimate setting at the MET. Without any verbal communication with the audience and with no way for them to read his facial expressions, Buckethead makes it abundantly clear he wants you to come along with him on his trip, to be part of his flow. It’s all about the flow and Buckethead was deep in it Wednesday night at the MET.