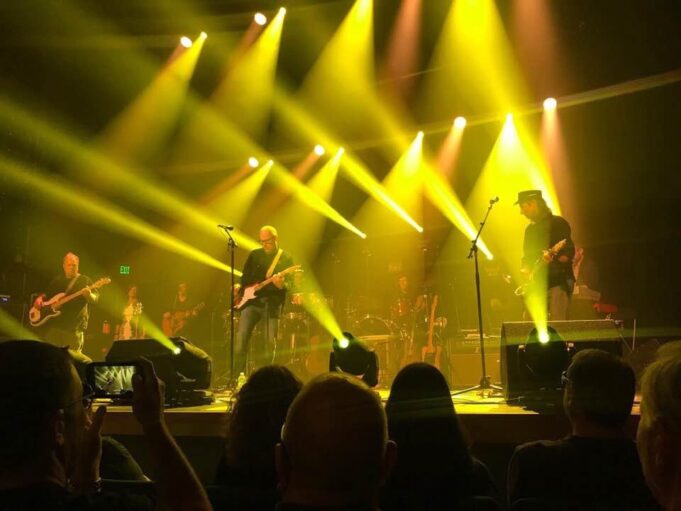 When I first heard The Dark Side of the Moon, I didn’t like it.

Between the long intro sound collage before Breathe, the lengthy synth pulse of On The Run and the clocks/chiming/ticking intro to Time, I thought to myself, “Where are the SONGS?” Of course, I was in high school, and my jam was prog and heavy rock. Stuff like Yes, Rush, Maiden. Complex songs with a LOT of notes.

But it didn’t take long for me to appreciate the space (shock!) Floyd left in between its notes, the choices of instrumentation, mix, the ethereal David Gilmour leads, the jazzy Rick Wright piano noodlings, and soon after — the lyrics, oh man the Roger Waters lyrics really got to me. I was hooked.

Still in high school, a group of us budding musicians got together and said, how hard would it be to learn to play Dark Side, live? We learned Breathe, Time and Us and Them and that was pretty much it. Then we moved on to other things in our lives, as you do.

Fast forward to 1997 (about 20 years later) when my buddy Brendan Relaford and I were knocking around Eugene, Oregon trying to think of a musical project that would give us a little joy. I had just left a band I had been touring with for five years (The Strangers) and Brendan had been our manager, and was learning to play bass. He was lead booker for a venue called the Wild Duck and had control of the calendar.

Remembering that very brief experiment from high school, we hit on the idea of putting a group of friends together and learning Dark Side and playing it, once, at the Wild Duck. It went shockingly well.We got offers to do it again, had opportunities to evolve it, show by show, one of by one off.

So now, that ‘just one time’ has evolved into 25 years, which saw us play not only Dark Side but The Wall, Animals, most of Wish You Were Here and cuts from Piper at the Gates of Dawn through The Division Bell. In Eugene we played the Cuthbert Amphitheatre across several summers, we rang in at least a dozen New Years at the McDonald Theatre. We played the Oregon Country Fair, with the Eugene Ballet at the Hult Center, in Portland we played the Roseland, Crystal, Aladdin and Revolution Hall. We even trekked to Seattle once to play the Triple Door.

A few members came and went, with a core four staying the 25 years. It’s been a journey, and our audience changed alongside the band. That first gig in 1997 – there were mostly older guys with longer, graying hair, standing in front, arms crossed, waiting to see if we could pull it off. That changed over the years and at some point our shows saw teenagers in rock T-shirts hugging the front of the stage. It dawned on me that this was perhaps as close to an actual Floyd show they would ever get. We watched our own kids grow up through these shows. My oldest son, now 24, was not yet born when we played our first gig.

And in the process, these ones off became very important to me. This is the passing of torches. The enlightening of generations. Is that too bold a statement? I don’t think so. There is something about Floyd’s music that connects viscerally. It’s almost a rite of passage to go through a Floyd phase. I remember that same 24-year-old son coming to my house in seventh grade with Wall lyrics handwritten onto his school folder. Proud moment, right there.

So we take this thing seriously. We try to play the music faithfully, taking an occasional liberty. Sometimes we choose to learn a live Roger Waters version of a song instead of the original…But we know we are sharing our love and passion for this music with our audiences. We know they don’t have a lot of chances to hear it done well.

As Floyd tribute bands go, we might be one of the first, but we certainly are not alone. There are other Floyd bands who play a lot, all over the region. We stay in touch with them so we don’t book shows the same month. But in our 25 years we have played less than 50 times. We early on decided to do it infrequently and when we did, pull out all the stops – lights, lasers, props, videos. Big shows.

For example, we played The Wall for a few years running. Every time we tried a new visual idea, be it a prop (singer/drummer Rich Sellars sitting in front of an old TV to sing “Nobody Home” just like in the film), a lighting effect, videos, samples. One year we had the idea to construct platforms on either side of the stage where Rich and I would trade “Run Like Hell” verse vocal lines, back and forth. We concealed the front of these platforms by building brick walls with actual cinderblocks from Home Depot. Looked great. Murder of a load out.

What we didn’t do is assign roles to players, like a lot of tribute bands do. There is no “Roger Waters guy” in the Slips. To be fair, Al Toribio does all of Gilmour’s leads, but that is because I have literally never heard anyone besides Gilmour himself play them the way Al does… The current lineup also boasts several long-time members. In addition to me, Rich and Al, all co-founders in 1997, we have Ned Failing on drums, Ehren Ebbage on bass (taking over for fourth co-founder Brendan who has retired due to health issues), and Nicole Campbell on vocals who have all been in the band almost 20 years each. Keyboardist Dustin Lanker is the ‘new guy,’ joining a few years back, and sax player Sean Flannery has also been in the band almost 20 years, after a Spinal Tap revolving sax role the first bunch of shows.

The band has existed across two economic downturns, five presidential administrations, the 9/11 attacks (we played a few days later…), and now, sadly, a pandemic and another war. There have been years where bringing the Floyd’s music and messages to audiences has been inspiring, and other years cathartic. (The line in Mother — “Mother should I trust the government?” — always gets a rousing NO, regardless of the year).

So as we approach our 25th anniversary shows – April 2 at the McDonald Theatre in Eugene and April 9 at Revolution Hall in Portland, I remain enthused. We are going to play Dark Side all the way through, again. But also Animals and a ton of other songs. It’s a long show. But I will savor every second because I never know if it’s going to be the last time or not. These are all one-offs after all…

Paul Lesinski is a Portland-based guitarist, songwriter and singer, who fronts the Paul Lesinski Band and co-founded Pink Floyd tribute band Floydian Slips in 1997. Seek out “Paul Lesinski Music” on Facebook, Instagram and Bandcamp for more details or visit www.paullesinski.com