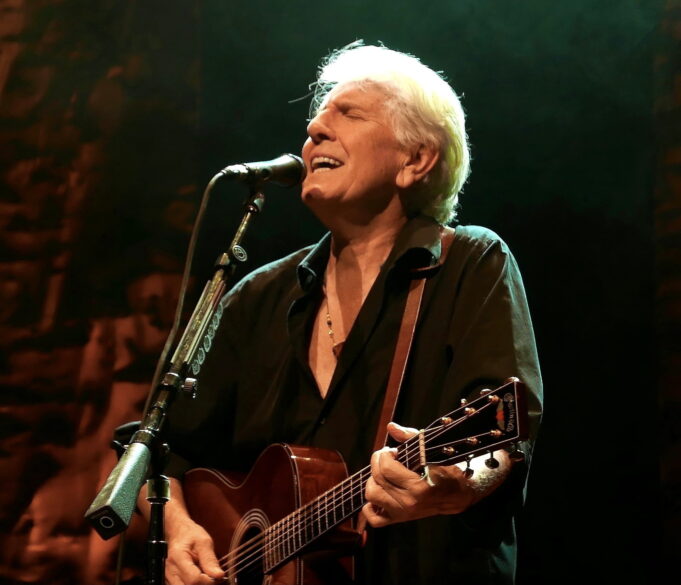 The Graham Nash show on Saturday at Mars Music Hall was wonderful. At the beginning of the show, Nash admitted that he had to change his intro plans, then went immediately into powerful renditions of “Find the Cost of Freedom” and “Military Madness”, dedicated to the people of Ukraine.

This was my first experience at Mars Music Hall. I found the acoustics to be good for this type of performer. Nash’s show varied from one guitar to a full band – and was a trio with no drums. I ran into some friends in public, a rare event during the past few years of COVID isolation.

Nash performed with two other musicians. The string player was Shane Fontayne, who has played lead guitar with well-known artists including Bruce Springsteen, Ian Hunter, Jon Waite, Joe Cocker, Mick Ronson and more. He played various guitars, and something that looks like a balalaika. The keyboard player was James Raymond, and he is David Crosby’s son. Raymond has credits on albums with David Crosby, Crosby/Nash, Warren Zevon and recently wrote with Michael McDonald.

All were amazing musicians, and as you might expect, three-part harmonies must be stellar if you are going to play Crosby Still Nash and Young songs. Those three people produced a rich sound that filled up the room. Nash alternately played acoustic guitar and piano. He did skip a very few of the highest notes, but his delivery and high tenor voice were perfect, and the man just turned eighty last month.

The selection of songs was interesting; Nash played many of his best-known Hollies, Crosby Still Nash (and Young) and solo tunes, but also songs by musicians with whom he has been associated. Joni Mitchell’s “A Case of You”, which was an interesting choice given Nash’s prior relationship with Mitchell. The song may well have been written about Graham Nash, according to Joni folklore. Neil Young’s “Country Girl” was almost symphonic. The Beatles’ “A Day in the Life” was complex; a big sound from only three people on the stage!

The show was dubbed “An Intimate Evening of Songs and Stories.”  In addition to hearing these songs with a fresh ear, it was great to hear Graham Nash tell some of the tales behind songs like “Winchester Cathedral” and “Marrakesh Express”.

They finished off the second encore with a group sing-along of “Teach Your Children”. Overall, this was one of the best concerts I have experienced in a long time! The show was a long time coming, having been rescheduled several times since the original date of March 2020.

This is the first submission by Tom Moss. Be Like Tom! See a show, tell the world all about it!

This recording is from earlier in the tour: