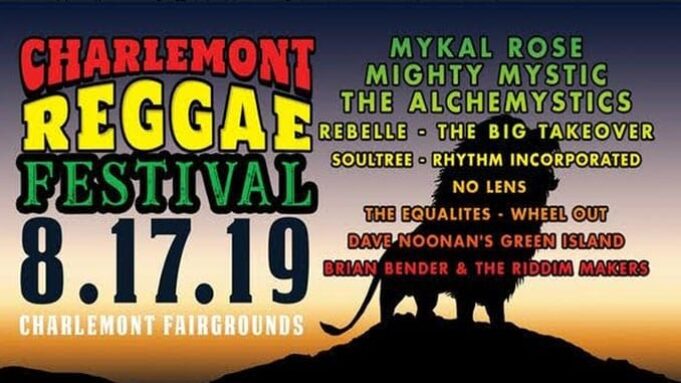 The 2019 Charlemont Reggae Festival was a big success. The event featured fifteen acts on two stages and it was well attended by an appreciative crowd. Even several torrential downpours couldn’t stop the music.

Soul Tree rocked a lot of funky reggae instrumentals reminiscent of Sly and Robbie, at times. Dave Noonan’s Green Island covers everything from ska  and rock steady to dub and contemporary reggae. It’s a huge band with horns, and the lovely vocals of Leslie Smith, who did an outstanding version of the R&B classic, “I Wanna Get Next to You.” Leslie also brought her vocal charm to the Equalites set. The Big Takeover did a lively set of originals and Simon White got the crowd going with hip-hop oriented reggae.

The Alchemystics pumped up the massive with hip-hop roots originals before Rebelle knocked the crowd out with their international deeply spiritual multi lingual roots Reggae. Leaders Manou Afrika and Kalpana Devi have been running hard for several decades now and the work pays off with several stunning originals by both lead singers. A mid-set uptempo song by Devi was a festival highlight, as her powerful accoustic strum created a truly hook-laden original vibe.

Then it was time for the feature set of the day.

The Charlemont Reggae festival has always been a quality affair, but has never featured before an artist as “legendary” as Mykal aka Michael Rose. Now 62, Rose has been at the top of the Reggae field since the late 1970’s when he brought several classic songs he’d already recorded solo to the vocal group Black Uhuru. Any reggae fan lucky enough to own a vinyl copy of Uhuru’s first LP Showcase can attest to the shocking power of Rose’s songs set against the revolutionary “riddims” of Sly and Robbie and adorned with the haunting background vocals of group founder Derrick “Duckie” Simpson and the late American singer Sandra “Puma” Jones.

Coming into view during reggae’s late Marley period, this recording added a whole new dimension to the emerging Caribbean “rockers” sound. The group signed to Island Records and blessed the early 80’s with one gem LP after another, touring with the Roling Stones and the Police. After the last of these, “Anthem” won the first Grammy in the new Reggae category, Rose left the group, but has continued since then with solid solo CD’s and LP’s in “foreign” aka the world outside Jamaica, and many 45’s and dub plates on the island. Hawks and Reed had already featured Rose’s Uhuru replacement, Junior Reid and Simpson’s 2019 Black Uhuru at the Greenfield club, so it was a fitting trifecta to feature Rose at their first production of Charlemont Reggae Festival.

Blasting on stage with his female background vocalist in tow, Rose wailed through a half dozen or more classics from the aforementioned period,including “Shine Eye Gal”, Solidarity”, and “Guess Who’s Coming to Dinner”. Mid set he changed up the beat a bit with slightly different newer originals before a mellow version of Screaming Jay Hawkins “I Put a Spell on You.” He left the crowd calling for more!

Incredibly, there was more to come. Mighty Mystic, a US based reggae artist did a lively set to close out this very successful Festival.

The second stage was somewhat over shadowed over in the corner of the fairgrounds, but displayed a nice “downhome” roots vibe to those who made the trip over. I got to work some accoustic rare Marley tunes like “Slogans”, Brian Bender played a set of jazzy originals on keys, trumpet, melodica and trombone, featuring Chris Ellis on drums. Under the Tree had the most  women and children of any band of the day and played a lot of fun and funny original tunes. Wheel Out and No Lens represented a lower key personal original-song reggae without the hoopla of the “big” stage.

Ultimately, the festival was a heaping dose of musical medicine for these often troubled and turbulent times.

Author David Boatwright is a legitimate expert on reggae music. His band The Equalites have been working the New England reggae scene for decades after his original band Loose Caboose set the foundation for New England reggae.

You can see the Equalites at their upcoming live appearances in 2019 including: