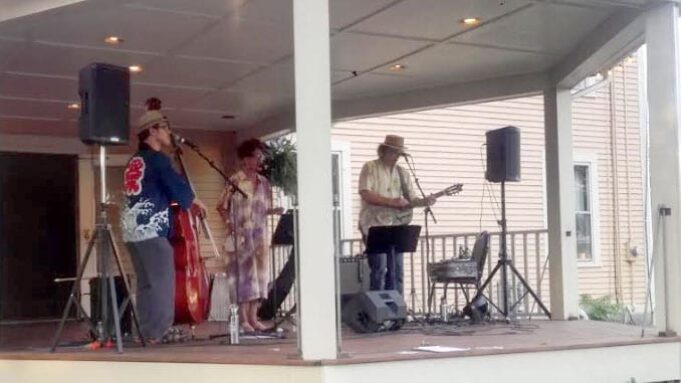 StompBox Trio at The Porch in Florence August 23 2019

StompBox Trio performed on the Porch in Florence for a ninety-minute set and I was lucky enough to see them. “Roots” as in, authentic and indigenous sources and forms of music were on display. Indigenous to where and when is a question that is wide open in the eyes of a humble scribe, as everything comes from somewhere just as surely as apple pie – or Americana lol – started here in the Lower Forty-Eight.

StompBox Trio are keeping it cool for starters; it’s a mellow early evening in this lovely little town. We’ve seen ’em fire it up before, however they roll, and they do it soulfully. StompBox Trio’s take on an old Who classic, sounding fundamentally spiritual, begs a scribe to fire up the recording device. Mere minutes later, a smooth groove beckons for another tap on the little red button, especially as they announce it to be one of their originals.

That number and the next call up exhibited a smooth funk vibe, and all their material has an old-school spiritual feel to it: a form of folk, steeped in the blues. There is an engaging and almost mesmerizing, acoustic soul music that lays low, allowing and calling on each member of the trio to supply and sustain an elemental sincerity. This ain’t quite Gospel, but it could fit right in at an ole-tyme camp meeting hour.

The effect of authenticity is conveyed via each of the three minstrels, with Evelyn Harris’ earthy and emotive vocals at the center, of course; she adds percussion every here-and-there as she sings or during the instrumental passages. Deadheads or jazzy jammers would find plenty to sink their teeth into here, as such sections come often and always to good effect.

Guitarist extraordinaire John Caban stays with a dobro (and a stomp box) throughout the show, and without limitations of any kind. The resonator is mostly just the right tool for this primal job, but it’s also pretty amazing what Caban can do with that amplified implement. Caban is one of those universally versatile instrumentalists. When he plays that thing to sound like blues guitar, it calls up Lucille, when he wants to make a sound like rocking lead guitar, well… watch and be amazed. The sounds of his riffs seem to be limitless. And when some sonic effect or another is in order, he’s all over that too. One has to keep looking to be sure some other instrument hasn’t slipped into the mix.

David Rodriguez plays the stand-up bass and a foot-tangerine or whatever the lady called it. The sum total is a pretty precise, pretty music with a loose feel to it. Each of the players contributes that loose-tight feel, and Harris leads the charge with BVG’s by John C. This is tasty, classy stuff, and a perfect primer for Rebirth Band tomorrow night at Progression Brewery… which is my next stop tonight, to get me some of another great local band.