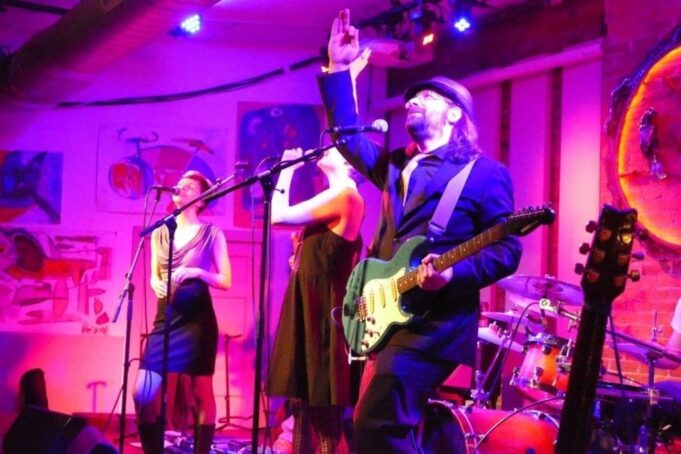 Hawks and Reed has fast become a great place to see shows in Greenfield MA- converting the old Clark Sporting Goods building into a multi-faceted venue able to host shows big and small.  Already the brick building right off the town green has seen major shows from KRS-One to Yellowman and will soon be hosting other great events including April 20 with the legendary band The Skatalites with Dave Noonan’s Green Island. I have already played the venue several times with my band rice – an American Band and was stoked to come together with another regional band, Colorway, on a cold night in February.  I had seen Colorway once before with Flux Capacitor at the Root Cellar about 18 months ago and I remember enjoying them then.

An extensive gallery of photos by Vinny Natale of the Colorway set is here.

The trio, fronted by F Alex Johnson has a great rhythm section in Matthew Clegg on bass and Riley Godleski on drums and vocals.  They powered their way through a dozen songs, many of which are being set for release on the band’s new album which should be coming out this spring.  Johnson deftly fronts the band on guitar and vocals, with the three of them easily coming together and becoming a solid unit.

The influences are twofold, the Beatles or Buddy Holly and sixties era rock and pop, but almost more so the next generation that was influenced by those bands is the primary influence on Colorway.  Weezer, Fountains of Wayne, I’m guessing Elvis Costello, XTC, and others who are influenced by the first wave of rock and roll, have influenced this seemingly third wave derived from the roots of rock. Johnson is able to go from three-minute melodically-focused pop songs to more epic eight to ten minute songs that include guitar journeys that are less indulgent than they are exploratory.  The maturity of his writing and performing are on display and just because the world isn’t familiar or fawning over his work for the last twenty years does not diminish the evolution and expertise with which he has crafted his music.  Fans from melodic pop to garage will find his next album to be very satisfying I expect.

Full audio of Colorway (the recording begins about 1 minute into the first song.)

So, full disclaimer-  I own this site and I play in this band. I have resisted all self-promoting temptation to constantly report on our travels, though some other folks have written reviews that have been posted here. This was a fully interesting gig for me and the band.  While it is probably the fourth or fifth time at this venue, and the band has been together some three years, this was a night filled with new material and experiences.

Lauryn Winiarski was playing her first gig with us on bass and keyboards in Greenfield, and her second gig overall.  Kyle Heon has been with us for almost six months but the experience all seems new each night still. We were a big band that night- eight pieces including Steve Benson on bass, mandolin, and pedal steel plus vocals, yours truly on guitar and vocals, Emily Jones on vocals, Courtney Parker on vocals, Joshua Leach on guitar and Brian DiMartino on guitar.  We took up the whole stage from side to side but all managed to feel out our own space, too.

We started with Pink Floyd’s In the Flesh (Part One) for only the second time ever and it felt much better than the first time we tried it last month at Bishop’s.  It’s a short song and we morphed into an original Free Karma which is a staple song in our set.  I proudly announced that we were running almost 62% new material that night, and I was just considering songs that we had done only a time or two or were being premiered that night as new.

We had a bunch of super fun experiences-  Steve Benson pulled out his Irish drinking song, Seven Drunken Nights by the Dubliners, and it definitely pulled the crowd into the show.  Joshua Leach made his vocal debut with rice with Soundgarden’s Blow Up the Outside World with he and Courtney Parker carefully sharing the duties of Chris Cornell- a testament to his dynamic range is that it takes two singers to cover his parts. A new original came out when I re-debuted a song I had written twenty years earlier, Workin Stiff, which I had done with my prior band, Freaks of Nature.  rice had done it maybe once in 2015, but I consider it a virtual debut in that nearly the entire band is different than it was then.

Emily Jones came for her featured vocal debut, bringing to life the Cranberries song Dreams which featured amazing harmonies with Parker.  While none of these songs came out in our perfect version of them, how they may end up being eventually, it was such a joy to bring them out and watch the band wrap itself in its newest identity.

The rhythm section held it down with amazing confidence, guitar solos flew all over the stage, and the singers- five different people throughout the night and oftentimes four at a time- seemed to really be connecting.  I am so happy about the progress of the band and to look out and see people responding, connecting with the music that we are making.  The biggest responses of the night seemed to be for new material which is just such a satisfying feeling.

To close the night I chose the song I’ve been closing shows with for decades, an original called Flow of Things.  The straight-ahead rocker vibe is a perfect example of what I am trying to achieve with my on stage ventures, perhaps sneaking in a lyrical moral or two while I’m at it. Not that it was packed in there by any means, but there was an enthusiastic reaction to the closing number and while U2 or Bruce are not worried, we did get a request or four for another song from the audience and we closed out the set.

Calling on the audience to remember the start of our set, we closed out with Pink Floyd’s Comfortably Numb which is a staple of this band’s set and a joy to play.  Brian DiMartino scorched his guitar solo as usual and we closed out the night.   rice will be back tonight February 18 in Vermont for our third appearance at the Snow Barn near Mt Snow.  After that a brief hiatus for wood shedding will have us coming back out April 6 for my birthday show at Bishop’s Lounge in Northampton with new friends Leon Trout.  After that, a summer filled with festival fun should include Strangecreek, Jerry Jam, and numerous other events culminating in this year’s Old 78 Farm Fall festival in Warwick, MA.  We hope to see you on the road.

rice Set List: In the Flesh (part one) Free Karma Only a Dream Seven Drunken Nights Blow Up the Outside World Workin Stiff Suitcase of a Ghost Mighty River I’ll Be Fine Dreams Just a Name Flow of Things Comfortably Numb.

Check out the rice FB page Soundcloud  and the video single for Mighty River.