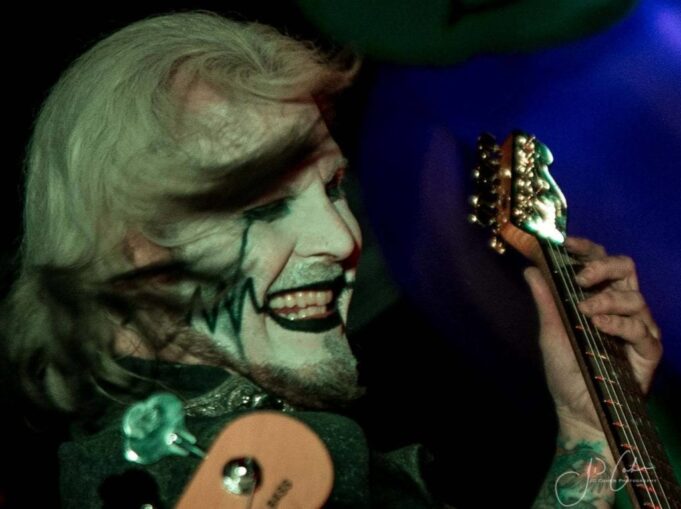 Tuesday night John Lowery aka John 5 headlined a three band, old school rock and metal extravaganza in Boston. One day after former bandmate Marilyn Manson performed at the House of Blues right down the street, John 5 dazzled fans with his high speed guitar virtuosity and showmanship at the Middle East Nightclub. On a stage adorned with Halloween and horror decorations and wearing his customary menacing face paint, John 5 performed a varied and tight set of instrumental material that included an impressive variety of styles and genres.

No one should be fooled by the cartoon imagery and shock rock theatrics, John 5 is a serious artist and a virtuoso musician. Even if you aren’t a fan of heavy or neoclassical metal, it’s hard not to be impressed by Lowery’s command of the guitar and his jaw dropping talent.

For the first half of the show Lowery let the music do the talking and didn’t speak a single word as he ran through older classic material like Rifle and Flight of Vulcan Kelly as well as newer material from his recent Season of the Witch 2017 releases. During the first half of the show Lowery’s only direct communication to the audience, other than through his guitar was an outstretched arm signaling to the audience for approval and applause after each blistering solo. Once the initial theatrics and impressive style changes were out of the way, Lowery seemed to open up to the almost capacity crowd and he spoke warmly about his connection to Boston and his fondness for the Middle East where he last played in April of 2017.

The highlight of the evening was clearly the closing medley which featured a long and participatory run-through of an exhaustive list of recognizable monster guitar jams including Van Halen, Kiss, Led Zeppelin, Guns and Roses, Judas Priest, Ozzy, Deep Purple, AC/DC, Ted Nugent, Rush, Rage Against the Machine, The Police and Michael Jackson. Turning his microphone on the crowd to sing along, Lowery fired off classic lick after lick and riff after riff to the elation of everyone in the room including employees and security staff.

From the video channel of Alex Pearlstein

Local rockers Bad Marriage opened up with an equally satisfying and ball out rocking set of hard and classic rock songs that included both covers and originals. Watching the band you can’t help think of Aerosmith in their prime, with guitarist Mike Fitz doing his best Joe Perry. Lead singer Jon Paquin gave a loving shout-out to guitarist Glenn Tipton who this week announced his retirement from Judas Priest due to illness.

Formed in 2015 Bad Marriages’ new single “Electric Emerald Eyes” was featured in Classic Rock Magazine’s “Best of 2017. It’s hard to believe this band is currently unsigned. If you like quality classic heavy rock, Bad Marriage is not to be missed. They will perform next with Buckcherry on March 7th at Pinz in Kingston, MA. Goth rock trio MAN1k1N, fronted by enigmatic lead singer Johnny. E. Veil also played a short set of dark, gloomy rock driven by the pounding drums of Cristian Carver.