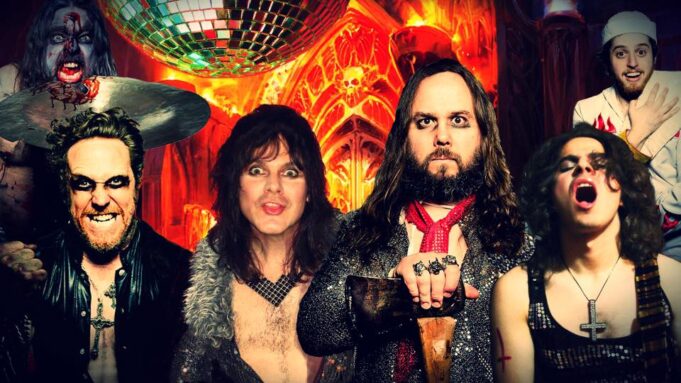 Tragedy: All-Metal Tribute to the Bee Gees and Beyond to play New Haven on Friday, February 16th

When I first heard of the concept of Tragedy, I couldn’t stop laughing out of sheer delight. As their bio says, “Born out of the impenetrable divide of Disco and Metal, these fearsome brothers fearlessly obliterated the truce line that had been set in the great Disco/Metal Peace accord of 1977 when they seamlessly blended the two genres with their debut album, We Rock Sweet Balls and Can Do No Wrong – a collection of Bee Gees songs redone in a heavy metal treatment reminiscent of Judas Priest, Motley Crue and Guns N Roses.

Since then, they have crisscrossed the globe with their spectacular live shows and having stormed across the USA, UK, Germany, Netherlands, France and Switzerland. Subsequent full length albums, Humbled By Our Greatness, Death To False Disco Metal, The Solo Albums and The Joy of Sex have seen them spread their glittered wings to take on non-Bee Gees classics from the disco era, soft rock anthems and party jams.” Apparently, in 2015, Tragedy broke the internet with a viral video featuring their take on “You’re the One That I Want” from the Grease soundtrack. In 2017, Tragedy’s video for “Stayin’ Alive” broke the Internet once again. They’ll be performing at Cafe Nine in New Haven this Friday, February 16th with American Trash and DJ R.I.C.H.A.R.D as their opening acts. It’s part of the “Fernando Pinto Presents” concert series.

Check out the review of Tragedy’s show at Thunder Road in 2015 HERE.

By all accounts, Tragedy is an over-the-top bombast of the can’t-lose combo of disco, metal, glitter, and magic – the #1 Party Band. Get your tickets to the show HERE. RSVP to the Facebook event HERE.

If you’re in Virginia, catch them at two shows in early March. . . Then they’re off across the pond! Don’t miss your chance to experience. . . TRAGEDY.

To submit a review for consideration hit us at [email protected] Check out the Live Music News and Review.com Facebook page for updates and announcements.