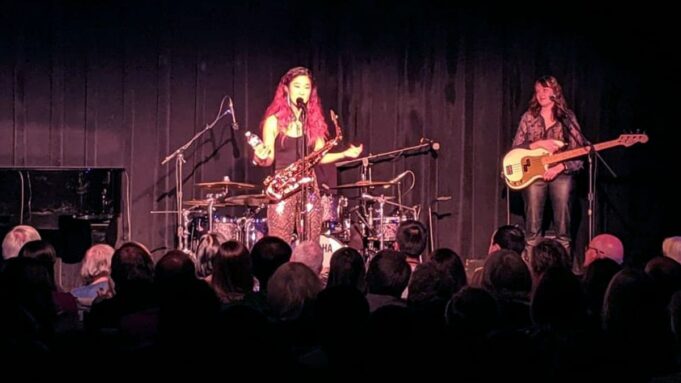 Grace Kelly returned for two sold out nights at The Natick Center for the Arts on December 6th and 7th.  Grace is a home town performer and the crowds are so happy to see her.  She began appearing at TCAN at open mic nights when she was eleven years old.

By the time she turned seventeen Kelly had performed her own concert there.  About four years ago when her show had sold out long before performance night her team offered a second evening and she has been selling out two shows annually since.  Seeing Kelly at TCAN is a local affair with her parents running merchandise sales and, if you stop by early enough, you might even get to meet the family dog, Asher.

TCAN is a great venue, comfortable with wonderful sound, but like many small venues there isn’t a lot of room to break out visually. No costume quick changes or elaborate costumes are possible on a stage completely filled by the performers.  Grace found an amazing way to up the ante on her performance by bringing in tap dancer Sara Reich who is featured in Kelly’s upcoming album “Go Time: Live in LA.”  Reich worked on a classic tap board, mic’ed to push the percussive nature of her tap dancing, turning her dancing into an instrument as well as a wonderful visual treat.

A Grace Kelly show is a wonderful exhilarating performance.  In addition to wonderful saxophone and song styling skills, she brings enthusiasm and intense energy to her shows.  She wants to be there with you and wants you to have a great experience.

Count on Me – an instrumental Grace Kelly composition inspired by Bill Withers’ song Lean on Me.

By the Grave – an instrumental Grace Kelly composition.  This version was dramatic, intense,  and eerie.  It is a saxophone duet with piano.

Feels Like Home – An original love song to her boyfriend, making the phrase “when your kisses taste like sunshine” come alive.

Louie Jordan’s Is You Is or Is You Ain’t My Baby.  Featuring Sara Reich on tap.

Fish and Chips segueing into Billie Jean, an instrumental to Sara Reich joining in on taps.

Van Morrison’s Crazy Love – with the audience singing along on the chorus.

On Friday night a special birthday shout out to a friend in the audience resulted in a Ray Charles style impromptu version of the birthday song.

Lemons Make Lemonade – with audience participation.  Inspired by John Baptiste who she worked with when she was in the house band for the Stephen Colbert show.

Encore – a lovely version of Somewhere Over the Rainbow.

Drop us a line to share your live music review or live music news story or event preview. [email protected]