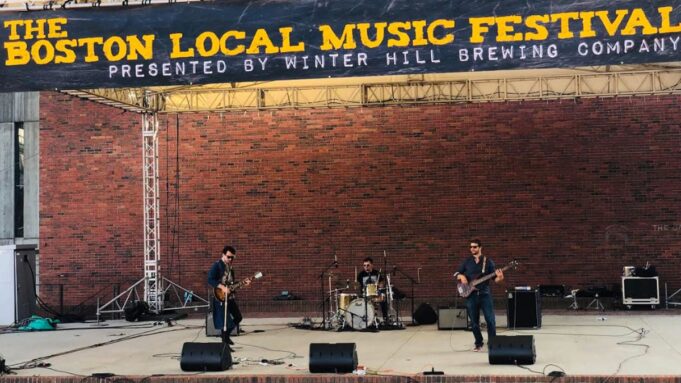 Local music history was made today there’s no doubt about that. Dave Crespo’s vision executed by Jen Matson of the Boston City Arts Council  went on without a hitch.  I’m sure the staff may say differently but from the crowd it was right on. The bands came ready to play and boy did they play.   There were no arguments, no fights, no problems just constant local music on all three stages from the late morning to the early evening.

Every single band brought the heat, the beer tent was always packed and people congregated at each stage throughout the performances.  There were musicians, artists, photographers, promoters, fans and passerby‘s enjoying the beautiful day at City Hall Plaza.  Everyone  came and left with smiles on their faces.  Heather Timmons from Tiny Oak Booking was incredible running around making sure all the stages had bands and the perfect sound and Mikey Shake mc’d the event to perfection.

The bands were on simultaneously and I couldn’t catch every act but stand outs for me were the_Stampede, the incredible Bird Language, Setfire, a powerful set by Pyramid Thieves, Analog Heart and The Cast Irons.   I mean everyone was just phenomenal.  One act really turned the festival on its head and that was Greg Roy.  After his set there was a line at his merch tent for autographs and pictures it was like nothing I’ve ever seen for a local act.  Those who came to meet this special talent treated him like an international superstar and he had the crowd going in every direction. He is something special.

This festival was a fine reminder as to why countless musicians from Boston and New England continue to grace national stages all over the world and hopefully the City of Boston can appreciate the effort and talent put forth today and allow the festival to diversify and bring in more urban genres in the future. But the future is bright and a precedent was set.

Boston Local Music Festival Day 2. The Finale.  With the Patriots and Red Sox on the box the crowd was smaller than yesterday but you wouldn’t know it with the cheers from the audience.  And the trick was on those in front of the tube because Brady sent his clone to Buffalo and stayed behind to enjoy some local music. (See below pics).

Like the day before the music and weather were perfect.  What stood out the last two days was the incredible diversity of musicians on the multiple stages.  Gender, race, genre everything was represented and individual beliefs were only portrayed through song.   No rants and no division just the music from individuals that pour their personal stories and ideals through their music which is how it should be done.

The TinyOak Booking stage was on fire today with a standout performance by Nick Zaino – Music and Writing, an extraordinary performance by Stevie from And Then There Was One, A rousing performance by the multi instrumentalist and extraordinary finger picking skills and vocals of Rebecca Kerwick.  Miele brought the crowd around the stage and in a trance for an impressive rendition of the multi-generational anthem “Comfortably Numb” by Pink Floyd.

The Rock City Stage had a slew of sublime talent including the marvelous Smitt E. Smitty & The Feztones, the exceptional Planet Mercury and a show stopping performance by Razz Saran and her band Why Try?

Like yesterday’s show with Greg Roy’s head turning performance today it was MC Kabir on the main stage that attracted unsuspecting fans from all over the plaza.  His one man hip-hop show was ferocious and was augmented by a much needed younger crowd that drew on his own music students from The Shady Hill School in Cambridge that came to support an original creator.

The intensity of the main stage was raised by Fire in the Field and like their peers the_Stampede from the day before they matched the energy needed to put fans back on their feet.  Mike Moore’s guitar virtuosity influenced by other Boston masters such as Van Gordon Martin , Duke Levine, Susan Tedeschi, Juliana Hatfield, Johnny Trama, Lyle Brewer, Matthew Stubbs  and David Mirabella won the audience over and for some time now has cemented his talent in that elite class of musicians that have always pushed the envelope and evolved Boston’s sound.

What better way to end the night with the raucous Celtic punk-rock of The Gobshites. Fronted by the wise Peter Walsh he cleverly ended the festival by inviting those who made it happen including staff, other musicians, and anyone who wanted to join in on his sermon onstage for a stirring show ending 15 minute jam.

There were many firsts at this inaugural event but there was one that stood out and put meaning into the madness of this special event and it was when Liz Bills jumped off the main stage during her band Analog Heart’s set and brought her performance to the audience and became one with them.   Local music and local people came together and everything from that moment changed as the actual point of the festival was made.

Winter Hill Brewing Company stepped up big time and threw caution to the wind and unlike many other breweries that swing with the trend they brought all the musicians together with their sponsorship of the event.    The Vendors were crucial to this event’s success.  The inaugural Boston Local Music Festival was eye opening in many ways.   A refreshing site was that bands from yesterday came back to volunteer and support the bands on stage today.   Witnessing how all the bands came together in support for one another one can only hope that this festival can grow to a point where it’s nationally recognized shining a spotlight on the diversity and growth that is the Boston music scene.

This is Mark Kaye’s first review with us. He’s a long standing member of the Boston music scene.