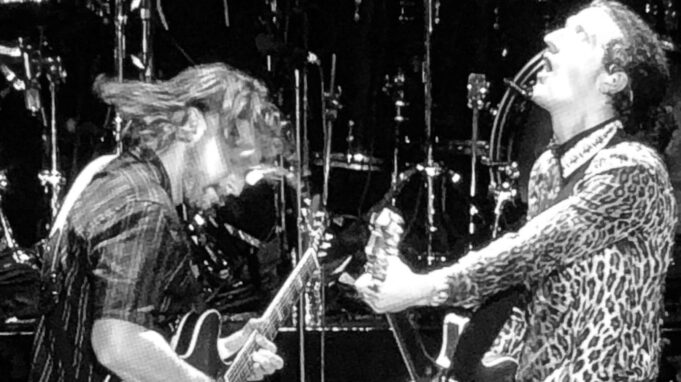 On tour supporting their latest album, Take Good Care The Revivalists hit the Greek Theater in LA on 9/27/2019 by Harriet Kaplan

The New Orleans-based band The Revivalists are currently on a national tour thrilling their fans with exuberant, infectious and high-energy performances to support their latest album, Take Good Care. The Revivalists include David Shaw on vocals, George Gekas on bass, Zack Feinberg on guitar, Rob Ingraham on saxophone, Ed Williams on pedal steel guitar, Andrew Campanelli on drums, Michael Giradot on saxophone and trumpet, and PJ Howard on percussion.

This powerhouse act delivered a satisfying, crowd-pleasing show at a recent stop at The Greek Theater in Los Angeles, CA on September 27. If taken at face value, the dynamic and versatile eight-piece band may seem like a mainstream rock and pop act.

Their infectious, hook-laden material is comprised of songs that are romantic in nature, express sentiments about trying to find one’s way in the world and deliver a positive, uplifting message about embracing life and love. Catchy choruses are a staple involving crowd participation to sing along and join in the fun and engage in the totality of a live concert experience.

The individual band members gave their all musically and are virtuosos at their craft and quite accomplished. They aren’t the type of act to just stand stationary and play their instruments, but instead, moved around the stage constantly to connect with the audience. Yet for all their obvious accessibility, The Revivalists blend other disparate musical elements together in their sound adding a more eclectic bent with blues, funk, R&B, soul and hip hop.

The lanky singer David Shaw is charismatic and magnetic frontman. He often reached out to the concert goers at the front of the stage to shake hands and bent down to sing directly to fans giving them an added personal touch.

The generous 17-song set, with two encores, was comprised of material from Take Good Care and songs from the band’s previous recorded efforts including “Oh No,” “All My Friends,” “You Said It All,” “Got Love,” and their biggest hit, “I Wish I Knew You,” among so many numbers played. The band’s cover of The Bee Gees’ nugget “To Love Somebody” was a revelation because it was performed with stark, plaintive power, beauty and grace.

The Revivalists offer something familiar yet contemporary with their music and lyrics that caters to commercial tastes aimed to reach mass audiences. The performance had a sort of choreographed, over-rehearsed feel to it. One can’t fault a band for being a well-oil machine with so many tour miles behind it. It’s not a crime to be so good but being too slick is another thing. A bit more spontaneity would have gone a long way. Though, their show itself did succeed in being thoroughly entertaining. The fans had a good time and enjoyed themselves.

That’s what mattered most.