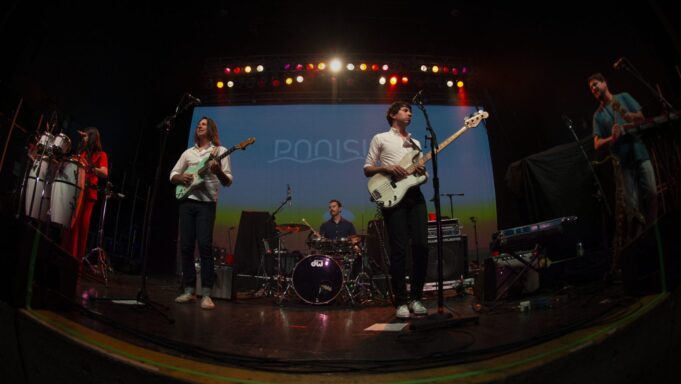 Tycho and Poolside, a pair of California-based bands, brought their artistry to Columbus
Ohio’s downtown venue EXPRESS LIVE! Tuesday, September 24 th for an evening of beachy vibes and sonic exploration.

Poolside opened the show, sharing their daytime disco sound with Central Ohio for the
second time in a little over a year, after headlining an intimate performance at Rumba Cafe in June of 2018. It was clear one year ago that people in Columbus were hip to the music of Poolside, and the band’s following here has only increased since then, with at least 1,000 fans, if not more, making sure they were inside the venue for the beginning of their set.

They got everyone moving right off the bat, opening the show with “Do You Believe,” a song off of their first album, Pacific Standard Time, which was released in 2012. Fans were dancing and grinning from ear to ear as the group made their way through the bouncy, upbeat tune which set the tone for what was to come. Poolside pulled primarily from their sophomore album, 2017’s Heat, including crowd favorites “And The Sea” and “Feel Alright,” but also mixed in a new unreleased song, “Can’t Stop Your Lovin,’” which was very well received by the audience. The official video for this new track, which was filmed on location in Paris, is included below.

After “Can’t Stop,” guitarist Jeffrey Paradise took a moment to address the crowd. “We’re
Poolside, we’re from all over the United States” he said before pausing for a moment, smiling, then continuing, “but we’re all Poolside tonight.” Paradise later took time to give a shout out the band’s youngest fan in attendance, who was riding the rail in the front row.

A beautiful rendition of Neil Young’s “Harvest Moon,” followed by “Everything Goes” closed
out their performance, with the audience giving them a huge ovation as they left the stage.

Now everyone was nice and warmed up and you could feel the anticipation for Tycho’s
upcoming set. Energy was building, as was the excitement. And when the lights dropped the crowd went wild.

Tycho took the stage and as Scott Hansen hit the first few notes of “A Walk,” a beautiful song that slowly builds for around 3 minutes before picking up serious steam, the fans roared in approval. Tycho is currently touring in support of their most recent album, Weather, which was released this past July, and its title track was next up, followed by “Into the Woods,” from the same album. We would hear all eight of tracks off of Weather before the night was through. “Hours,” off 2011 album Dive, with Hansen’s dreamy synth work along with a thumping beat behind it got the crowd grooving hard. Even the nearby bartenders were bobbing their heads.

Tycho’s sixth song of the evening featured vocalist Saint Sinner. Her addition to the group is something new for Tycho, as their four previous albums were all instrumental with an
occasional sample added in. Saint Sinner made her way onto the stage and was greeted
warmly before starting into “Japan,” and the band would perform four more consecutive tracks off of Weather which included her beautiful and delicate vocals. After finishing “No Stress” she left the stage to rousing applause, and the band went instrumental for the rest of the evening.

This is a good time to mention that a Tycho show is not only sonically stimulating, but most definitely visually stimulating as well. Their stage lighting and psychedelic imagery that is projected behind the band adds another beautiful layer to their performances.

Included in the second half of Tycho’s set were favorites “L”, from 2014’s Awake, and “PBS” from Past is Prologue (released in 2006), both of which worked the audience into a blissful frenzy. An encore consisting of “Skate” and “Division” sent the delighted fans home happy.

If super-chill, danceable music with a great beat is your thing, both Tycho and Poolside need to be on your radar. If you get lucky maybe you’ll catch both of them on the same bill!

Both bands will be hitting the road together again in early 2020 where from February 9th
through March 5th they will be making their way across Europe.