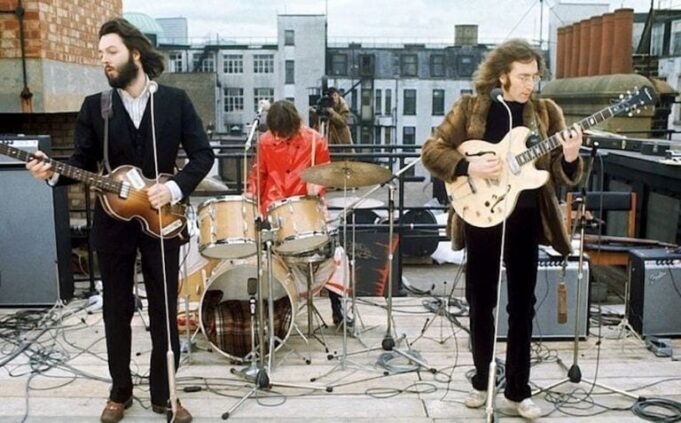 This year marks the fiftieth anniversary of The Beatles’ breakup. Although Let It Be was the Fab Four’s final album to be released, the majority of it was recorded the year before in 1969, while the penultimate release of Abbey Road was recorded after. Throughout the early sessions of Let It Be, The Beatles were planning a return to live performances, having not played a concert since they called it quits after the infamous show at San Francisco’s Candlestick Park in 1966 at the height of Beatlemania.

Those plans for a return to live gigs never happened. Instead, the Beatles’ last public performance was on top of their Apple Corps headquarters in central London on 30 January 1969. The unannounced concert had only been conceived days before it happened. Lucky Londoners on their lunch breaks looked up and marveled as the world’s most famous band played nine takes of five songs, ending with the rocking Get Back. The concert is one of the most famous gigs of all time. But there are several things you probably don’t know about The Beatles’ rooftop concert.

The rooftop concert was being filmed for the film Let It Be. So, most Beatles fans have only seen the 21 minutes of footage featured in the movie. That means you probably do not know that the concert actually lasted twice as long. In those additional 21 minutes, the band played off-the-cuff snippets from several songs, including a few bars from the song I Want You, which was later recorded for the Abbey Road album, and lines from Irving Berlin’s A Pretty Girl Is Like a Melody. The most-complete song played that did not make it into the film was an instrumental version of the British national anthem God Save the Queen.

You may no longer be able to see the Fab Four perform in real life, but you can get a taste of knowing what it is like to be in the world’s most famous band by playing the 2009 music video game The Beatles: Rock Band. There are also lots of other band-centric video games available online, including fabulous slots like the game Shamrockers, in which you can let out your inner rock star. Shamrockers, alongside plenty of other slot games, is available at Casumo casino.

Because the concert was being filmed, all the lyrics needed to be correct. John Lennon was well-known for having problems remembering lyrics in previous gigs, so the band did not want the same thing happening again. Therefore, Apple office assistant Kevin Harrington kneeled just out of camera view, holding up a lyric sheet for Dig a Pony. However, Lennon still managed to fluff his lyrics when singing on Don’t Let Me Down.

It was a freezing day with icy winds when John, Paul, George, and Ringo played in public for the final time. The cold gusts of wind were proving to be problematic for sensitive studio microphones that were recording the guitar and drum amplifiers. To solve the problem, engineer Alan Parsons was sent to purchase women’s pantyhose from a local department store. The pantyhose were used to wrap the microphones to shield them against the noise of the wind. But Parsons says the department store thought he was a cross-dresser when he burst in asking for women’s underwear. Why male underwear was not suitable remains unanswered.

One song played on the rooftop, which ended up being on the Let It Be album, was One After 909. What you probably do not know is Lennon wrote the song, with a little help from McCartney, when he was only 17 years old. The Beatles had originally recorded the song in 1963 during the From Me to You sessions at EMI studios, but it was shelved. Along with songs like What Goes On and I Call Your Name, One After 909 was one of the earliest Lennon and McCartney songs ever written.