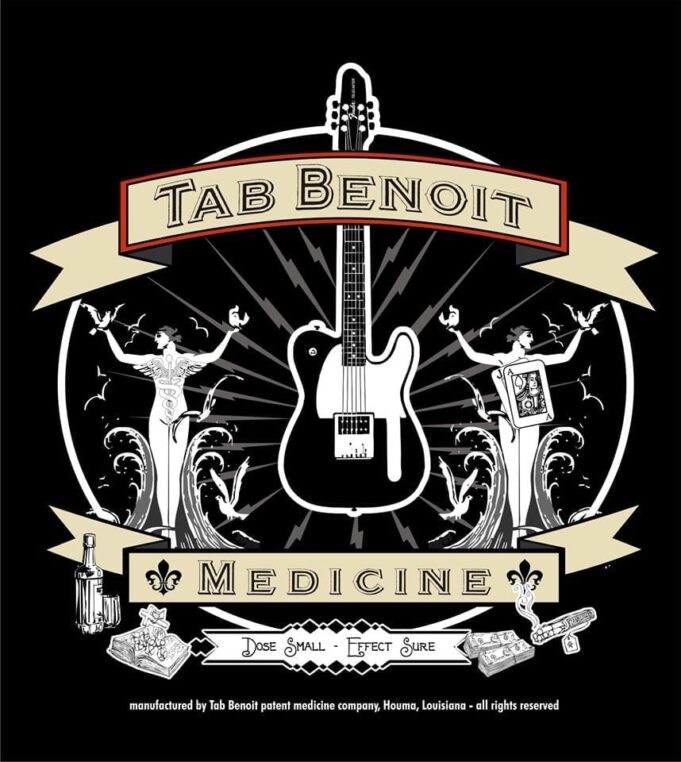 JP Soars: LET GO OF THE REINS showcases one of the blues world’s premier talents, JP Soars, with incredible style as a guitarist, singer, and songwriter. A two-time Blues Music Awards nominee, Soars draws from many styles and blends them into a sound that is all his own. Produced by Tab Benoit – LET GO OF THE REINS is a landmark CD for Soars and Benoit as they stretch boundaries while delivering solid songwriting craftsmanship on their “swampish” endeavor. J.P. is psyched about this latest release that was recorded during a whirlwind week-long session at Tab Benoit’s Whiskey Bayou studios, with a band featuring Red Hot’s drummer Chris Peet on bass, and Benoit on drums. They recorded twelve songs in five days – eight originals which they wrote on the spot, plus four choice covers. The inspiration for the album came from the many nights they all spent jamming into the wee hours on the Legendary Rhythm and Blues Cruise and at the Big Blues Bender, and as expected, they captured many magical musical moments.

In the decade since he burst upon the national scene by winning 1st place in the Blues Foundation’s 2009 International Blues Challenge in Memphis, TN with his band the Red Hots (and the prestigious Albert King Award as best guitarist), Arkansas native J.P. Soars has toured extensively through the United States, Canada, South America and Europe, and released an impressive catalog of powerful music. In addition to his work with his own Red Hots, Soars has been part of the regional all-star blues act Southern Hospitality, also featuring Tampa vocalist/guitarist Damon Fowler and 2019 Grammy nominee, Memphis vocalist/keyboardist Victor Wainwright, plus Red Hots drummer Chris Peet and Wainwright’s bassist Terrance Grayson.

Alastair Greene: Guitarist, singer and songwriter Alastair Greene will be releasing an exciting new record on Tab Benoit’s Whiskey Bayou Records. Known as a rocking guitarist with a strong blues background, Greene has released eight previous records. In addition to many years with his own band, he toured internationally for over 7 years with the Alan Parsons Project, and has spent the past year as the guitarist in the Sugaray Rayford Band, nominated for a Blues Music Award this year for BAND OF THE YEAR. Greene’s musical journey has been anything but traditional. His combination of Blues, Southern Rock, and Jam Band sensibilities has been thrilling audiences for nearly two decades. With recent performances at the Chicago Blues Festival and the Big Blues Bender in Las Vegas as well as recent tours filling in on guitar with Starship featuring Mickey Thomas, and many guest appearances with such luminaries as Eric Burdon, Walter Trout, Coco Montoya, Savoy Brown, John Nemeth, and Debbie Davies, it’s crystal clear….. Alastair Greene’s star is on the rise.

Alastair and Tab got to know each other on some annual gigs at the Big Blues Bender, and soon become friends as well as musical compadres, so when Tab asked Alastair to join his Whiskey Bayou Records label, it was a natural fit. Greene traveled to Whiskey Bayou Studios in Houma Louisiana with a handful of songs. Tab helped arrange and produce, they did some co-writing, and wound up with 11 original songs. With Greene on guitar and vocals, Tab on drums and harmony vocals, and Corey Duplechin on bass and harmony vocals they recorded most tracks live in the studio. Greene notes that these songs reflect more straight-up blues than his last couple of records, while the songwriting does stretch in to some different territories — Blues Rock filtered through a funky Louisiana Rhythm section. The new record will be coming in 2020. Stay tuned!

Josh Garrett: Garrett is a triple-threat singer, songwriter, guitarist with a growing reputation as an exciting genre-crossing performer from New Roads, LA. He and his family relocated to Houma, LA when Josh was a child. He picked up his father’s guitar when he was 12 years old and started writing songs soon after. By age 20, Garrett was performing several times a week in Houma, LA. At age 24, he recorded his first album entitled, Changed Man and never looked back. In 2008, he relocated to Nashville, TN. While there, he recorded his second album, Live on Printer’s Alley – a double album. Two years later Josh returned home to Louisiana and began work on his third album. String of Problems, released Aug 2011, which hit #1 on the Roots Music Louisiana Blues Charts and hit the #1 Spot two weeks in a row on American Blues Scene “Blues Top Five”. Josh still resides in his home state of Louisiana near Baton Rouge.

Multi-Grammy® nominated blues legend Kenny Neal says, “Josh is our next generation with an old soul and he’s playing it with his heart. That’s what we need more of today.” And rock great Jimmy Hall emphasized – “Josh Garrett is a young triple threat blues man, with a winning combination of unique Cajun flavor guitar work, soulful vocals, and a killer band. I am honored to perform with him.” Today.com wrote – “Not only is [Josh Garrett] an amazing musician, he’s an excellent performer. He’s charismatic, fun, and really knows how to work the crowd. If you go to see Josh Garrett and the Bottom Line you will definitely have an amazing time, especially if you love the blues.” Keep your eyes on Josh for a release in 2020 produced by Tab Benoit for Whiskey Bayou Records.

Damon Fowle: After spending much of the past year touring with the band Southern Hospitality, Damon Fowler is back with his third solo project for Blind Pig Records, Sounds of Home. Damon chose swamp blues master Tab Benoit to produce and record him at Tab’s rural Louisiana home studio, and their collaboration has resulted in Damon’s strongest effort to date. The tension between his measured, laid-back vocal delivery and the hallmark intensity of his guitar virtuosity has never been keener, and the stories told in his songwriting here – sometimes in collaboration with long-time writing partner Ed Wright and Benoit – exhibit a combination of depth, grace and humor very few of his contemporaries can match.

Damon sets the standard for what is to come on the first track, “Thought I Had It All.” It’s an introspective, brooding tale shot through with razor sharp, frenetic guitar leads. Other songs like the title cut and “Where I Belong” flow in an easy Southern groove. Damon offers up two covers, peppering Johnny Winter’s “TV Mama” with slithering slide guitar runs, and doing a great version of Elvis Costello’s “Alison.” The country tinged “Old Fools, Bar Stools, And Me” offers a poignant take on a familiar theme. “Do It for The Love” is a sweetly contemplative ballad featuring the lyrical counterpoint of Damon’s lead guitar and Tab’s pedal steel. The album closes with an inspired, finger-picked rendition of the traditional gospel song, “I Shall Not Be Moved.” As with Damon’s legendary live performances, Sounds of Home takes the listener on a tour through the rich traditions of American roots music, presented by one of its foremost practitioners.

Alongside his solo career, Damon joined forces with fellow guitarist JP Soars and keyboardist Victor Wainwright in 2011 to form the southern roots rock group, Southern Hospitality. SoHo quickly became a strong draw on the national circuit due to their early, roof-raising live performances and their first recording, Easy Livin’, on Blind Pig. Of their first show BluesWax said, “Southern Hospitality, after a single gig, has significant players in the blues world taking notice. Fowler, Wainwright and Soars share much love for the songs of the South. The hot jazz and funk of New Orleans, classic country, gospel, soul, and blues that became rock ‘n’ roll in Memphis and went global by way of a trucker named Elvis.” Hittin’ The Note called the album “a dozen potent shots of pure Southern pleasure. The roughneck, laid-back ways of this fine debut are reminiscent of the best days of Southern rock.” Damon has neatly managed to balance his participation in SoHo with his own, well-established solo endeavors.

Drop us al ine with your live music news or show reviews, or concert memories.