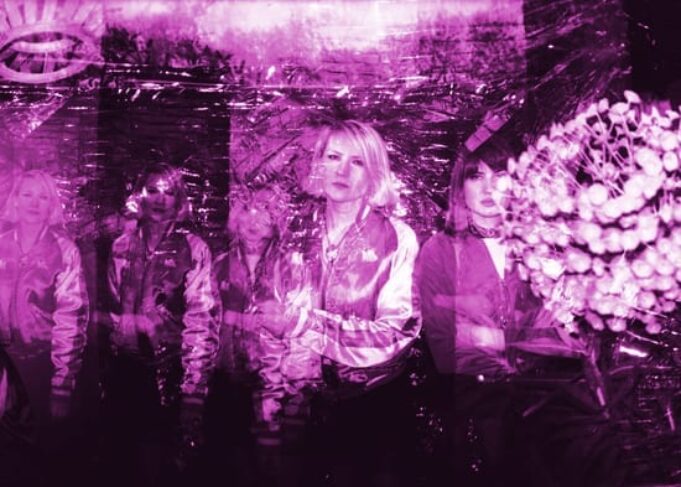 April 15th, 2020 New York NY/London, UK: Smoke Fairies have surprised fans by releasing an exclusive and unheard new track ‘No Matter How This Goes, Just Make Sure That You’re Kind.’ Recorded with producer Phil Ek in Seattle last year for their recent critically acclaimed Darkness Brings The Wonders Home album, the track was initially held back. However, the band, Jessica Davies & Katherine Blamire, feel the song to be so pertinent to the current world health crisis they wanted to share its message of love. The track is out today via all digital platforms: https://youtu.be/OCh_wT1Llkw

Jessica explains “There was something about this track that was more extreme and it wasn’t fitting the mood of the album for some reason. This song was written with a strong sense of foreboding. We know we were not alone in feeling that something big was creeping up on us all, something that would require strength, bravery and kindness. It now seems this track makes sense and we wanted to share it because no matter how this situation goes we are certain that if we just feed it love, good will conquer.”

Smoke Fairies have certainly been keeping busy, this week they sit at # 1 in both the physical and vinyl Official UK Singles Charts with ‘Elevator’ a Limited-Edition 7” picture disc. This follows the album hitting #1 in the Rock Album Charts at the start of February. Forced to abandon live plans to celebrate the release of “Elevator” by playing a series of intimate in-store shows and signings the band moved their single launch on-line and managed to raise money for the Red Cross in the process.

Building on that success Smoke Fairies have announced a second online show, for this Friday April 17th via their Facebook channel and will be donating any donations for that performance to The RSPCA conscious of the dip in donations to some charities at the current time. The band play via www.facebook.com/smokefairies at 8pm UK/3pm EST.

Be sure to catch Smoke Fairies’ Smoke Signals podcast, featuring Jessica and Katherine’s charming and drily funny reminiscences about their early days getting started in music, Stream the podcasts here: https://smarturl.it/smokesignalspodcast

Looking to later in the year the band have announced further tour UK tour dates following on from their sold-out UK shows in February, starting in Tunbridge Wells on 30th of September 2020 and followed by another London show for October, tickets on sale now.

To order a copy of Darkness Brings the Wonders Home, or to purchase tickets for the tour visit: www.smokefairies.com.

Darkness Brings the Wonders Home, Smoke Fairies’ widely acclaimed first album in four years and the first to come out on the band’s own label, Year Seven Records, was released January 31st and has seen some remarkable chart positions for a band operating as a fully independent venture (#1 UK album in Rock and a #6 on the Independent Album Charts). The set was recorded with producer Phil Ek (The Black Angels, Fleet Foxes, The Shins) over the course of a rigorous month-long session in Seattle. Smoke Fairies (aka Jessica Davies and Katherine Blamire) drew their inspiration for the album from mysteries both real and imagined: sea monsters, flocks of crows taking flight in extravagant formation, and strange creatures dwelling in the mud near their new South London abode. “Times of darkness are when people are often the most imaginative,” says Jessica in reflecting on the album’s title. “It helps you to see all the wonders of the world you hadn’t noticed before – the things you’ve been blind to because you’ve been on autopilot for so long.”

Smoke Fairies were the first UK act to release a single on Jack White’s label Third Man Records and was produced by White who also played guitar and drums. Other notable recordings include a cover of Neil Young’s ‘Alabama’ from his Harvest LP which appeared on a special Mojo album to mark the approaching fortieth anniversary of the album. Jessica and Katherine also contributed vocals to the track ‘Valentina’, a tribute to Valentina Tereshkova, the first woman in space on The Race For Space, the second album by Public Service Broadcasting. The band has toured this side of the Atlantic with Laura Marling, Rasputina, and most recently Blitzen Trapper and Dawes. The ladies plan to play stateside again with shows to be announced at a later date.