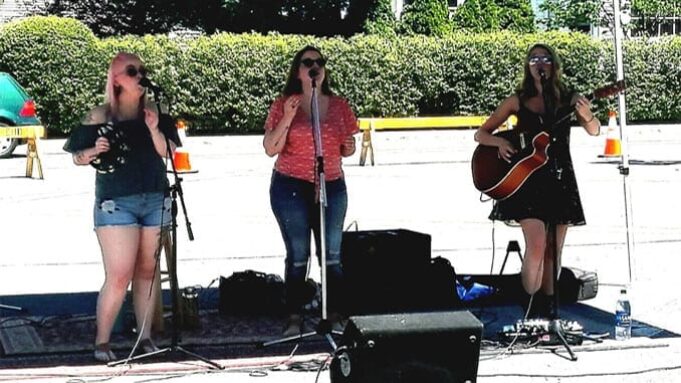 There sure is a lot of music here in my neck of the ‘hood this weekend in June. Especially Saturday the 8th, it can be a tough choice. We have Pints In The Park in Greenfield, another day of the Strong & Pleasant Music Festival in Northampton, and the cleverly concise Cultural Chaos in Easthampton. Running a mere five hours, starting at noon, this ambitious event packs in everything a music-lover or festival-goer could want, and just enough of it. Plenty of arts, artisans, and niche booths also line the third-mile strip called Cottage Street, with offerings from nearby or adjacent food-services, but probably the biggest attraction -and the one that must take an amazing amount of energy and time on the planners’ parts- would have to be the music… on three stages… plus a few bona-fide buskers and sidewalk songsters.

The choice is an easy one for me. The whole party is just a half-mile from home, at least two music artists are quite high on my list, and there’s sure two be at least one good surprise… not to mention the chits and chats and chance meetings all up and down way. All this and a set-up with enough room to move around comfortably. They even ordered perfect weather!

Eavesdrop appears again this year on the Nini’s stage, at the near end of the afternoon midway, and within easy whiffing-distance of the excellent Corsello Butcheria with its grills setup right by their shop. Their special menu for the day features the utmost in great American hand-held foods, sausage & peppers, and for a price no higher than anywhere such things are found, the fortunate gourmand enjoys a sausage of a much higher standard than the normal. These hefty links are expertly assembled here in the shop, as are lots of other products including smoked meats. The other, intriguing item available is perhaps more a signature item, the Italian Beef Sandwich. Each is offered on a baguette- the perfect match, of course- with appropriate accouterments. It’s hard to decide which to have right now, and which to come back for tomorrow- hoping, that is, that they have a portion or two in reserve.

The decision can wait. Right now I am taken away, as always, by the sound of three angel-voiced lovelies singing in harmony with the perfect accompaniment of one acoustic guitar. Eavesdrop calls! I love Eavesdrop, especially in their more austere configuration; but the full-band experience is not to be missed either. The trio’s full and soulful voices can be downright striking at times, but they normally do it nicely, and always pretty, as they rock the tunes they’ve chosen or written this time out. Chances are getting fewer and farther between to catch them as time goes on and their booking power extends to regional reaches beyond just our immediate environs.

The set wraps and I head down to the center/main stage where Rebirth Band is scheduled to start right quick after Eavesdrop. I pass through the not-too-tightly packed crowd, taking note of the many vendors (and colors) along the way. The object of my trek is almost ready to start; I figure I’ll use the couple-few minutes to do a little reconnaissance down the far end and back.

It ain’t so simple as a quick trip down and back… there’s a familiar face on the huge stage by One Cottage. The music I can hear as I approach is definitely of a jazz sort, so the likelihood increases. It’s a light and lively tinkling of the keys I hear, kinda like Corea with Costa sprinkles, fitting for a day as nice as this one. Surely the sort of stuff one might find Forest playing. I get closer; I see a big ol’ stand-up bass laying on its side, and standing next to it with his trusty Fender four- or is it five? no, six! phat-stringed bass exuding those low, atmospheric and articulate audio waves such as are coaxed along by a real artistè, the long, tall, younger Dulong plucks contentedly along. His dad Larry, one might remember, spent a good number of nights at the old Knightly’s pub in town- playing music, I mean.

Turns out that sprightly instrumental music came from the Zack Cross Trio. Drums, bass and key- a classic combination from a name I’d heard a few times; though I’d never had the pleasure… always good to hear good music a first time. I chatted for a  minute, then I remembered: Rebirth!

I aimed myself back up the hill to the Center Stage, and suffered no disappointment at all. There they were, doing their thing and doing it joyfully, lifting my spirit as soon as I heard it. This wonderful World Music ensemble comes out and about far too seldom; Rebirth is one of those rare bands that grabs a person by the ear- {really} grabs, so there’s no choice but to STOP and listen… not for long, though; this is not music that’s made for sitting around.

The beat and the bass and the love of all just vibes out of these people who, one gets the feeling, really love their music, and believe in it and live it. That bass and that pair of percussors pop out true and clear, while allowing plenty of space for the guitars and/or the mandolin. And when the one feller slips the slide on, it ain’t necessarily the blues- it’s a sign that things are gonna get artistic, creative, and intriguing. It’s always fun when a guitarist gets adventurous, maybe even unorthodox, with one of those cylindrical things on his finger.

Comparisons have been made, favorably of course, with eighties-era Juluka, King Crimson and Bruce Coburn, as well as Peter Gabriel’s ongoing experiments, and the most obvious one to come to mind is Paul Simon’s Graceland. Locally, Rebirth Band would be a great pairing with the fantastic Viva Quetzal. Spicy, lively, spiritual and positive, this is uplifting music for anyone lucky enough to get to it.

This whole, all-too-brief celebration called Cultural Chaos is an entirely uplifting affair of its own. And chaotic it ain’t, really; it’s more like a controlled cultural exchange. ‘Control’ in this case is not so much about micro-management as oversight. The event runs so smoothly that those five hours slip by like one or two.