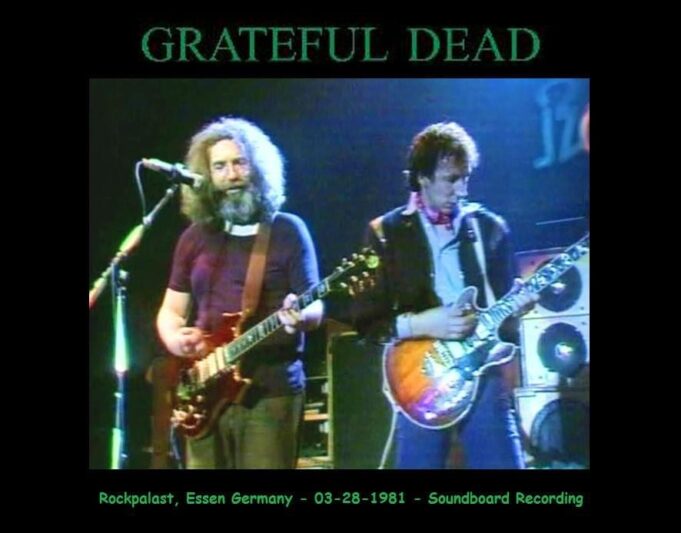 On March 28th, 1981, I was there at The RockPalast in Essen, Germany, in the fifth row for The Who & The Grateful Dead. I actually snuck into the show with some Belgian friends.

Long story: We left from Brussels, Belgium headed for Essen, Germany, but had gone forty five minutes the wrong way on the Autobahn, so we got there late and completely missed The Who’s set, which ended at Midnight. We had no tickets, so while we were in the parking lot, trying to figure out how to get in, a Coach Bus pulled up and parked right next to us, and Jerry Garcia popped out and said “Hi!”

We said “Hey, Jer.” back, with the girls giggling in disbelief. Then the whole band filed out of the Bus, as well as The Flying Karamazov Brothers, and we tried to follow them all in back stage. The attractive girls we were with got in with the band but not me & the guys.

So, my Belgian pal Bernard says, “Listen, Germany is a very orderly society. No one would ever dream of trying to walk in without a ticket. So, that’s just what we’ll do” I replied to Bernard, “That’s just crazy enough to work” and it did! We walked right through The RockPalast front doors straight down to the front of the stage, where we saw the Stagehands dismantling The Who’s drum kit, in preparation for The Grateful Dead to come out.

The set is unusual in that it has a long stretch sit in with Pete Townshend from the Who after Drums and Space. Pete stays for an extended stretch of “Not Fade Away” “Wharf Rat” and “Around and Round” and the set closer “Good Lovin.”

We hugged each other gleefully and and enjoyed this whole show! There was a time change that night, the clocks went forward an hour, so we walked out smiling after that Dead Show at around 5:00 am.

This show was a Live Cable TV Broadcast throughout Europe, so it’s a rare Pro-Shot Video of the band from this era.

Me and My Uncle
(John Phillips cover)

Drums
(with The Flying Karamazov Brothers)

Not Fade Away
(The Crickets cover) (with Pete Townshend)

Around and Around
(Chuck Berry cover) (with Pete Townshend)

You Better You Bet

See Me, Feel Me

Drop us a line at [email protected] with your live music news, concert memory, or live show review.