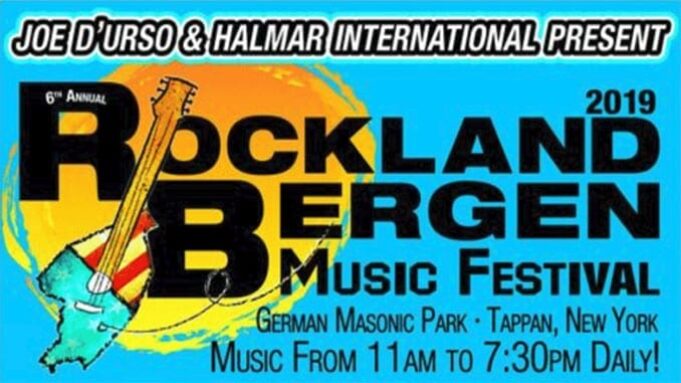 Presented by New Jersey/New York fixture Joe D’Urso and Halmar International, the 6th annual Rockland-Bergen Music Festival kicks off on Wednesday, June 19 at Levity Live in West Nyack, NY with the Rockland County Music Awards. For the first time in its history the festival will span five days and four music venues, featuring headlining sets from Steve Earle & The Dukes and American songwriting legend John Prine at German Masonic Park in Tappan, NY on Saturday, June 22 and Sunday, June 23 respectively. This will serve as Prine’s only metro-area performance of the summer.

Tickets are currently on sale on at rbmfestival.com

“When I first started this festival five years ago on my 50th birthday, I hoped to see it grow and bring in many of the world’s best songwriters as well as involve more local charities and communities in both Rockland and Bergen counties,” says Joe D’Urso.”

Both counties have been underserved with outdoor entertainment/national talent over the years. I had a few “goal” songwriters in mind when I started, and I am extremely proud to present John Prine and Steve Earle this year as they were part of the “goal” writers I was thinking about.”

Rockland-Bergen Music Festival’s mission is to host a week of music that will connect the local community to great artists as well as charities like Habitat for Humanity, Meals on Wheels, WhyHunger, Light of Day, and many more. There will be 16 charities on site each day under the banner of “Active’s Circle of Hope” once again sponsored by Active International.

“Having the amount of local charities involved at RBMF each year is just as important to me as having some of our Country’s best songwriters performing,” stated D’Urso. “I always joke that the weekend of RBMF is my inner Harry Chapin and Pete Seeger exploding as my goal from day one was to have every single person who walks into German Masonic Park make a connection with one of the organizations that we have on site each day. Not just a donation/drop in the bucket, but making that organization a part of their lives for years to come. It will enrich lives, trust me on this one.”

The festival begins on Wednesday, June 19 at Levity Live in West Nyack/Palisades Mall as the RBMF will honor a handful of area personalities with the first ever Rockland County Music Awards. The honorees will be announced in the June issue of Rivertown Magazine. The free admission event will be a mixture of music, speeches and hopefully a new chapter for Rockland County looking at its past, present and future.

The next two days of music will take place at Rockland/Bergen county music venues ’76 House, located in Tappan, and The Turning Point, in Piermont. Featured acts on June 20 and 21 include School of Rock Orangeburg, Foxfires, Bach to Rock, McMule, Scott Wolfson & Other Heroes, The Slippery Chickens and Matt Jaffe.

A few new elements to RBMF this year include the involvement of City Winery who will be pouring many of their famous wines each day at German Masonic Park, the Rockland County Music Awards, and the Rockland County Beer Garden which makes its debut highlighting local craft beer. Also, the legendary Capitol Theater of Port Chester, NY will be on site each day at the RBMF giving out promotional tickets to their famed theater.

Children 12 and under admitted for free with Adult

High School and College ID: $35–day of purchase only, no advance

Organizations On Site Under “Active’s Circle of Hope”

Rain or shine event
Parking: $10 (portion of proceeds donated to Light of Day & WhyHunger)
Parking lot opens at 9:30am
Tailgating is now allowed in German Masonic Park parking lots
Gates open at 10:30am
Music begins at 11:00am
Music ends at 7:30pm
No re-entry except for medical reasons

-Blankets and chairs welcome
-No outside food, beverages, plastic bottles, cans, pets, coolers, or knapsacks
-There will be no tents allowed this year due to the expected size of the crowds
-Small umbrellas are fine in case weather is inclement as this is a rain or shine event
-Hats, sunglasses and bandannas for shade, Sunscreen
-Personal identification and medical documentation, in case of emergency
-Cash is good to bring. There is an ATM on site as well and the town of Tappan is close by
-Rain gear, just in case, and clothing with a hood. Extra pair of shoes/sneakers.

Masonic Park asks that you please NOT bring

-Liquor, Beer, Wine, Soda, Water (All will be sold on site at very reasonable pricing per Joe D)
-Coolers
-Backpacks are OK for clothing and personal items, but are subject to security search upon entrance
-Guns or knives (really?)
-Fireworks
-Pets (Service animals, trained to assist an individual with a disability, are allowed)