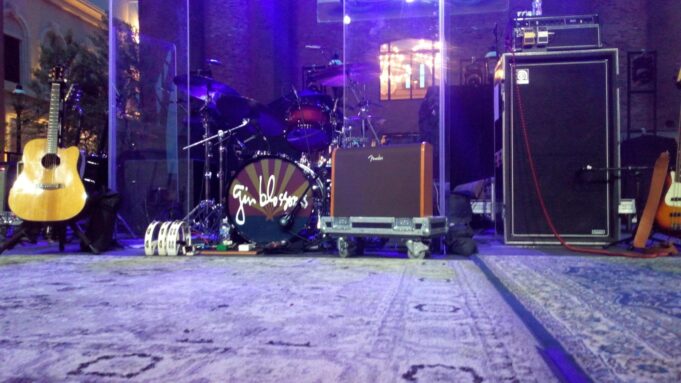 Two bands that were touring and radio juggernauts in the 1990s came to the new entertainment center of western MA, the MGM Grand casino in Springfield, MA. Of course I had been hearing about the casino for years before it was even built, and the notion that Springfield could come alive again as a place to see bigger live shows was super enticing.

The Gin Blossoms are a band that you would not expect to have developed the ever lasting fan base that they have. I met and spoke with Bill and Andrea before the show, who are decades long fans. They were seeing their twentieth show or more, and it was clear that they put down benchmark dates on their calendar to reflect important shows, and were even willing to fly to Nashville to catch a quick 3 day vacation that included their favorite band.

The show was located in what appears to be a giant courtyard area. It has the commercial feel of a casino, but it’s nice, clean, and has a huge canopy tent that covers the entire stage and audience area. This provides both the feeling of an outdoor concert and the cover from rain and sun that is really a nice amenity. The entrance procedure was not lengthy and despite some technology snafus the casino managed to move people into the venue quiet easily.

The band fired through a good eighty or nintey minute set including all the hits that you might expect. Of course Hey Jealousy is the band’s most recognizable song for me, the noob that night. But the Gin Blossoms is one of those bands that you know much more of their material than you thought you might have. Their concise set included Follow You Down, Even the Losers which was of course a great Tom Petty cover, Allison Road, Til I Hear It From You, Found Out About You, and Hey Jealousy.

At set break I met a super fan of Collective Soul, who had many of the same things to say about CS as the folks had to say about Gin Blossoms that I met before the show. The assembled fans of both bands were super psyched but as is fitting of their more mature status, were all getting along and swapping stories and having a grand time. Collective Soul hit the stage with instant energy and E Rowland jumped behind the keys and was ready to rock, opening with Observation of Thoughts. He had the crowd in his palm instantly.

The band fired through song after song, with the energy and tight arrangements of a band who has earned their longevity, not just through the passage of time but through countless gigs and dedicadtion to their craft. Accessible rock and roll with a nod toward the 90s and a willingness to integrate the times is their calling card and fans of both bands ate it up from the get go. Rowland alternated between keys, acoustic guitar, and just staright up front man at the mic stand. The rest of the band were super tight and following his lead.

I had the pleasure of meeting drummer Johnny Rabb via phone a month ago and we spoke extensively about drums, technique, innovation and Collective Soul so I was especially interested to hear him on this night. He achieved exactly what he set out to do with this band, paid close reverence to their sound, style and history without imposing his personal will on them at all. I would never have guessed he wasn’t the original drummer on any of the songs that he played that night, but he had tons of flair and personality without being distracting at all.

Collective Soul fired through hits from the third song Shine all the way til the end of the show. They also showcased newer material for the fans, illustrating that they are not stuck on nostalgia. Most of the way through the show they busted out a cover of fellow 90s heavyweights REM and members of the Gin Blossoms jumped on stage to join the band’s version of The One I Love. All in all, this was a great night.

I would not hesitate to go to see a show at MGM Grand again as I am certain that they will be bringing in bands that have long neglected Western MA and we will all have the opportunity to catch great music in Springifeld for years to come.

Observation of Thoughts
Heavy
Shine
Why, Pt. 2
Better Now
Now’s the Time
Over Me
Precious Declaration
December
Right as Rain
AYTA (Are You the Answer)
The World I Know
Good Place to Start
Crushed
The One I Love (R.E.M. cover) (with some of the Gin Blossoms)
Gel
Where the River Flows
Run