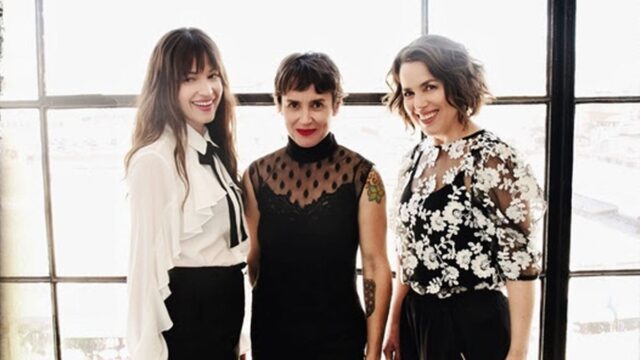 The Haden Triplets—Petra, Rachel and Tanya— have released a video for “Every Time I Try,” directed by Rachel Lichtman with a cameo by Nick Offerman. The video is in the spirit of the 1950s Ozark Jubilee national television show from Springfield, Missouri, where their father Charlie Haden and his parents often performed.

Written by their brother Josh Haden (of the band Spain) for the 1997 Wim Winders film The End of Violence, The Haden Triplets’ arrangement of “Every Time I Try” is on their upcoming album The Family Songbook, out January 24 (Trimeter Records).

The Triplets will be touring in 2020, including a hometown album release show January 24 in Los Angeles at Zebulon, April 11 in New York City, and festival appearances at Big Ears and Stagecoach.

Like their late father, the bassist Charlie Haden, who changed jazz’s trajectory alongside Ornette Coleman beginning in the 1950s, the Haden Triplets belong to the American heartland, and to the winsome family harmony singing of the region’s folk and country music.

The Family Songbook mines their family’s heritage with newly discovered songs by their grandfather, Carl E. Haden, friend to the Carter Family and Porter Wagoner, and patriarch of the singing Haden Family, a fascinating footnote in country-music history.

Their uncle Carl Haden Jr. had recovered his father’s sheet music and relics like the songbook favorites of the Haden Family. Carl released songs and songbooks, as well as ’zine-like collections of family photos and anecdotes, through the radio stations that broadcast the Haden Family, namely KWTO, out of Springfield, Missouri. Charlie Haden joined the family band as a tot in the late ’30s, and became a featured singer—yodelin’ “Cowboy” Charlie—when he was so young his mother had to hold him up to reach the mic.

The Family Songbook also features arrangements of the Carter Family, Josh Haden, and their take on Kanye West’s “Say You Will.” Produced by Woody Jackson, The Family Songbook might also be considered one of the year’s great guitar records, with Bill Frisell, Greg Leisz on pedal-steel and Doyle Bramhall III, joined by Don Was and the late bassist Larry Taylor, of Canned Heat.

“We’ve always been blown away at our brother Josh’s songwriting skills,” says Petra. “His songs are so deep, beautiful, and melodic. The Triplets recorded “Every Time I Try” because whenever we sing it, we’re always locked in and in perfect harmony.”

The Haden Triplets carry between them a list of credits that includes some of the most interesting rock, jazz, and experimental music to come along in the past 30 years: that dog., Weezer, Beck, Foo Fighters, Green Day, Jimmy Eat World, Bill Frisell, Sunn O))), Mike Watt, The Fates from Anaïs Mitchell’s Hadestown,Paul Motian and the Decemberists, to name just a handful. The Triplets’ sound is as otherworldly as ever—evocative of both the old, weird America and a specific brand of vocal charm that anyone who’s minded indie-rock since the early ’90s will recognize.

Drop us a line with your live show review or live music news story at lmnandr@gmail.com