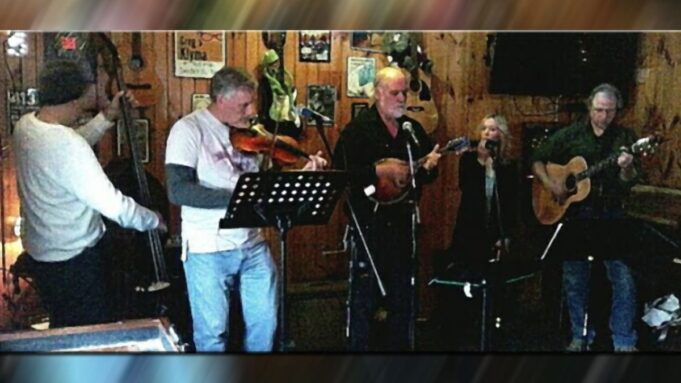 Old timey acoustic music (amplified, of course) in a wee corner pub on a Sunday afternoon…. life is good- and here is Ravenwood.

Ravenwood String Band is bluegrass by definition, but the particular flavor of this ensemble makes me wanna qualify it further. Actually, this music makes me want to holler out for joy and let it ring across the mountaintops. Sarah Miller’s voice in particular resounds with an aire of Appalachia, adding a note of assertion to the otherwise Grand Ole Opry atmosphere filling the room.

As far as a sub-genre, to whittle it down to something specific, we might have an example here of something Wikipedia identifies as ‘neo-bluegrass.’ It’s not all-the-way traditional bluegrass, and it lands itself just this side of progressive bluegrass, but it’s a lot of both- and quite respectful of the overall genre as well. This lovely stuff epitomizes Bill Munroe’s characterization: “It’s blues and jazz, and it has a high lonesome sound.”

A quick chat with fiddler Don Calsyn confirms the very thoughts running through my own mind, and his respect for the musicianship in the field and in his band is apparent even as he unabashedly admits to a certain amount of what an artist will call ‘challenge.’ This is a good thing- a balance of awe, humility, intimidation bordering on fear, and joyful embracing of an unknown outcome- this is what keeps art and music moving forward; and it is good and healthy for the art-form, the future, and the humans being involved.

These guys (and gal) are much better than I expected. They sound pretty near perfect on this night. The word coming to mind is pristine, like a sunny spring day, dew-drops on the daffodils, sweet honey on the rocks with a chug of brewed iced tea.

I first ran across Ravenwood a few months ago, in the park, across the pond and naught but a quarter mile, as a crow can fly, from where we are at the 413. Don was just taking off for another gig, and bass-man Greg Ackerman was somewhere, I dunno. So the trio left to trudge along faithfully in fun was made up of the aforementioned Sarah singing, Barry “Merle” Searle playing guitar, and John Alpin on mandolin; and their music was perfect for an outdoor event. When the band is in full force, four of the five will step up to one of three microphones at various and sometimes the same times, so the overall output can get quite filled with depth and dimension.

The dynamic is organic, flowing naturally as it rises and somewhat subsides without ever fully falling, and building as we go, as it should to make the experience feel like a program. The place is small but the house is full, and the vibe is everything any live show should be. Folks are familiar whether or not they know each other, the banter from the band grows more comfortable as their playing takes on the lubrication of reciprocal enthusiasm.

Ravenwood String Band have been wood-shedding, working themselves in for a good year; they’ve been getting out and about some lately; and they are in place and ready. By the time they launch their third set today, I am sure they’ve pretty well shown their stuff. Nope- they have more. Some different takes on a few tunes we know, a further wave of vocal depth and liveliness, and no fewer audients enjoying as we go… and more in the door, actually.

This show is certainly a success. The scuttlebutt all around the place is nothing but affirmative, positive- excitedly so. I would hesitate not one whit to recommend them highly, book the band, or buy a ticket to a Ravenwood show. Nor would I be at all surprised to see them appear at Green River Festival next year; they are exactly what that roots music festival is all about.

For now, good news just came out, announced over the PA: Ravenwood String Band will next appear at the Rendez-vous in Turners Falls, which will be a great place to see them, on December 22. Another Sunday afternoon show- NICE.