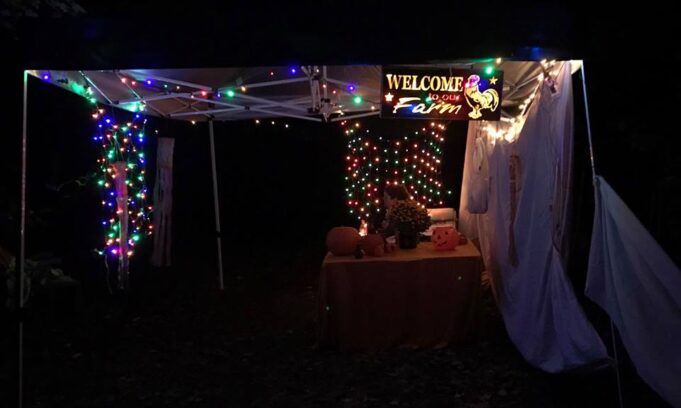 Celebrating its 8th consecutive year, the Old 78 Farm Fall festival finally got some good weather resulting in a supremely happy day.  Hosted in the bucolic right to farm community of Warwick MA, nestled up on MA borders with both VT and NH, the festival is an old=fashioned fall festival farm party secretly becoming a regional music festival.  The band featured music on two stages all day, home grown food, regional craft vendors and the beauty of autumn in the heart of foliage country. The gates opened at 11AM and for the first time ever there was a very early band in Shiprock and Anchordog who performed on the front lawn for a small gathering of families and children.  Courtney Parker and Evan Curran have an infectious catalog of material that is both educational and incredibly musical.  They play mostly originals but had a great version of the Lorde song “Green Light.”  Their voices are perfectly matched and beautiful, and it was a perfect way to get warmed up while the festival concert field was putting the finishing touches on production and preparations.

Patty Tuite and Friends opened the Warwick stage.  Patty and Eric Engman have appeared at the festival before in other bands, but this was the first appearance with a band focused on Patty and her songs and her musical friends.

Consisting of Patty on guitar and vocals and  Eric on bass, Rick King on guitar and vocals, Dave Beauchamp on guitar, plus Rory Walsh on drums.  They fired through more than an hour of blues and rock originals and a whole host of traditionals and covers.  They had a strong fan presence at the fest, and even drew some of the audience up to play percussion.

Greenfield MA ensemble The Diamondstones opened up the main stage with an hour of strong compositional rock.

From their original opener “Prism” to unusual covers by the Beatles (“Hey Bulldog”) and Paul Simon (“Fifty Ways to Leave Your Lover”), to their instrumental closer, the band is showing why you should take notice of them. Consisting of brothers Ben and Nick Popowich on guitar /vocals and drums respectively and Noah Tilley on bass plus additional players on lead guitar and keys, the band should quickly gain a larger following.  Their songs are tight and interesting, and their playing is for lack of a better description, playful.

Next up on the Warwick stage was another Pioneer Valley band, Lunar Carnival.  Kat Alexander and her band of merry music makers combine elements of jazz, folk and gypsy stylings into a sound that is distinct and fun.  There was a bit of trouble getting the vocal clarity established just right through the sound system, but the band powered through it and the situation was righted as the day progressed. In addition to the normal instrumentation you might expect here, with drums, guitar and bass, there was also a cool mix of unexpected instrumentation in Steve Benson (festival musical MVP who played on five different sets throughout the day) on pedal steel and even sitar, and Steve Yarbo on the clarinet.  The sonic differences were very welcome and helps to provide Lunar Carnival with a sound that is different and a pleasant change from a traditional folk lineup.

Up next on the downhill stage was the homegrown feature, rice – an American band.  The band is the de facto host of the event, with Phil Simon acting as both property owner and rhythm guitar player and vocalist for rice.  Many of the bands throughout the day contain current and former, and perhaps future, members of rice.  The lineup on stage that day included Dave Noonan on drums (who also had a guest spot on the Lunar Carnival set), Steve Benson on bass (unlike his Lunar Carnival position), Joshua Leach on guitar, Brian DiMartino on guitar, Emily Jones on vocals, and Courtney Parker on vocals.

The band fired through a dozen songs, almost exclusively original material.  Partly through the set they called up Patty Tuite to join for a version of Bob Marley’s “Cornerstone“ but otherwise the material was exclusively originals.  The lead vocals are mostly in Simon’s end of the stage, with Courtney Parker taking lead during the second song of the set, “Only a Dream,” and later for the original written by Parker and DiMartino, “I’ll Be Fine.”  The three-piece vocal section provides a united front and a voice to the material, and the guitar onslaught as split between the three guitarists provides plenty of concise but exploratory shredding.  Benson does his share of lick spitting on the bass, too.

Lunar Carnival followed with their second appearance on the uphill Warwick stage.  This second set was sans drums making it a more traditional folk lineup, and the clarinet soared.  By this time festival attendees seemed to be well into their feeding frenzy, sampling the variety of foods for sale: the farm itself produces some vegetables and poultry and they were put to good use in the forms of chicken or veggie chili, roasted squash soup, championship BBQ provided by I’m a Hog for Que, Baby barbecue team, and Grandma Lynn’s homemade pies.

Duppy Conquerors came next on the downhill stage. The premier Bob Marley tribute band out of Boston, this group had its inaugural Old 78 experience that night.

Their faithful renditions of Marley’s oeuvre brought a chill vibe to the early evening.  They brought up local trombone player Kat Rapacki who was able to easily jump in and add to the vibe.  Duppy, who have a weekly residency in Boston, have recently expanded their touring base and are now hitting various spots throughout New England, and I wouldn’t hesitate to go and see them again any time.  They were great.

Rebel Alliance made their third appearance at Old 78 and are a house favorite.  They clearly brought a crowd as a small swarm gathered around the uphill stage.

Consisting of Michael Wood on drums, Wesley Childers on lead guitar, Johnny Bongos on percussion, Woody (also Mike Wood) on guitar and vocals and a new bass player, Bob Bass.  Their vibe is so happy, and the band is so good, that they took the crowd on a quick rocket ride for their first set.  Man of the day Steve Benson also joined on pedal steel and Courtney Parker sang backup vocals on a few tunes as well, echoing their performance at StrangeCreek campout earlier this year.

The Alchemystics, hailing from Northampton, MA, came onstage to great fanfare: this was the first time ever they’d graced the stage at Old 78 as a cohesive unit. Their set quickly filled the field and it’s not hard to see why; their combination of reggae, soul, and hip-hop is infectious and makes people get up and dance. A soulful cover of “(You Make Me Feel Like) A Natural Woman,” with Ilana Morris on lead vocals, brought the proverbial house down.  Her cover of Allen Stone’s “Loose” is just as great as it is unexpected.  But there were plenty of Alchemystics originals with Ian-I holding court on guitar and vocals, and Force covering the MC position with aplomb.  As always, they are an emotional band, at times reflective and at other time uplifting.  Having overcome obstacles and tragedies again and again, it’s easy to see them as an example of resilience, but that might undercut their keen musicianship too. At one point they called up Trombone Kat also, further illustrating the community vibe developed by all of these musicians on stage that day. I noticed during one song that they had really gelled as a unit in an amazing way.  Even without vocals they were adept, expressing themselves both within their genres and just as dexterous as bands from other genres. https://www.youtube.com/watch?v=6y3ibHqDgWM Credit the rock solid rhythm section of Freddie M on the drums, Chris Ball on the bass, and Jon Corda on the keys for bringing a new level of musicianship to the band that has been a benchmark in the valley for nearly a decade already.  Being able to tie that together with a three person vocal front makes them truly one of the best bands in western MA.

Most of the Alchemystics audio is below:

Rebel Alliance took the Warwick stage for a second time and were livelier than ever.

Wesley Childers was ripping solos, and the vibes were rich and overflowing.  After a second short set which included, naturally, “Smile Pimp,” “Last Night I Shot the DJ,” “My Fam,” and other Rebel originals, plus a great Tom Petty cover in “You’re So Bad” when the band was called up for an unexpected (for them) encore to top off their appearance.

But that wasn’t all! Flux Capacitor, from Pennsylvania, headlined the festival after a three-year hiatus and had the stalwarts up and grooving late into the night. They opened with what is ostensibly their current single from a forthcoming studio album, Freedom Killers.  A particularly spirited, and unexpected, version of Toto’s “Africa” had the crowd whooping in approval and of course singing along. The band opted for lengthy selections including “Lights Out,” an epic “Happy’s Vaporizer,” and a raucous cover of the ancient blues song made popular by the Dead in the 60s, “Viola Lee Blues.”  There was a new Flux original that I had not heard previously called “The Fisherman” which showcased and illustrated their personal blend of rock, jam and tronic influences, and they closed the set with “Big Bad.”  The energy had really been expended, and the band and audience were both happily ushered into the night, sated by some twelve hours of continuous music of every style and sort throughout the day.

By the end of the night, many had gathered around the roaring bonfire to sip the last drinks of the evening and listen to the wind blow through the tall trees that surround the property.

It was a reminder of why we live in New England and why the change of the seasons is so special. Until next year, this unique community of hill people and music lovers, festivarians and foodies will just need to keep warm with their memories of the eighth Old 78 Farm Fall Festival.  The music will keep us awake through the long New England winter that is surely coming.