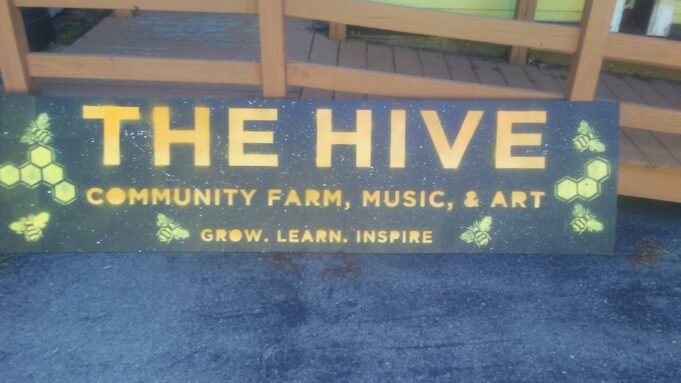 Ok friends. I’ve got to let you in on a little secret I’ve stumbled upon. It’s about this sweet, little community space that has just started up in Candia, NH. Acquired in June of this year, The Hive, as it’s called, boasts a sprawling property that includes farmland where people can hosts private parties and/or music festivals. From September 29 – October 1 I attended its third get together of the year, Foliage Festival. The feeling that came after those two nights and three days will forever be a part of me.

As a community space, The Hive takes pride in taking care of one another. As a spot for a music festival, it takes pride in the surrounding beauty and prime, semi-secluded location. As for the music? It was seriously as good as anything you’ll go to all summer. I was pleasantly surprised. There may have been a few hiccups at the start on Friday. Not everything was ready from the get-go. But that’s what you come to expect from a group of people who have only been doing this for a couple of months. Saturday brought a few rain showers that dampened everything but the crowd’s spirits, but the bonfire was roaring and welcoming. Once that ball euphoric sound come rushing out of the speakers however, it gained mass and grew into something much bigger than music itself. 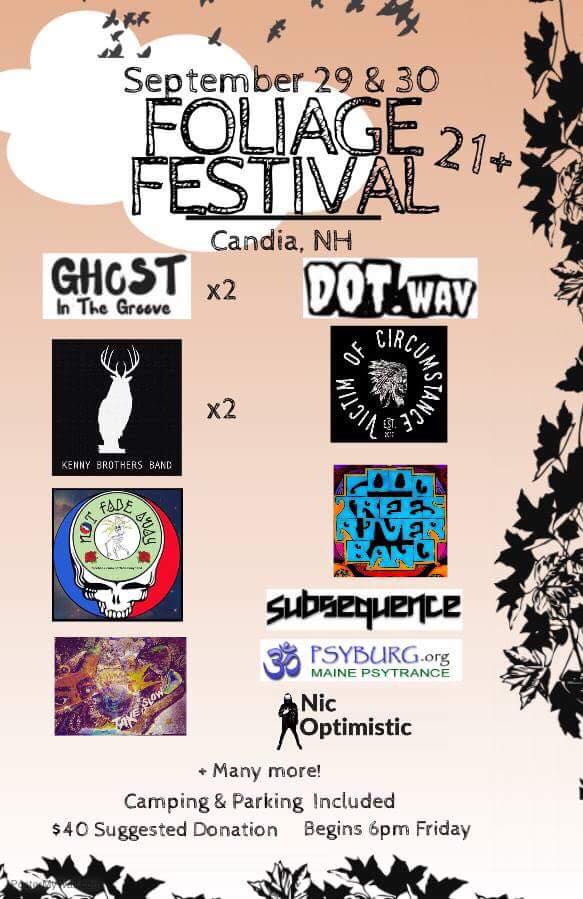 Ghosts in the Groove, Not Fade Away Band, Victim of Circumstance, and SubSequence were just some of the bands on the bill. Each brought their own, but one in particular caught my ears, eyes, and heart. The Kenny Brothers Band from Stratham, NH took me to a place I didn’t know I needed to be. It’s true, I’ve seen them once before at Wild Woods, but this time I was able to fully listen and appreciate the magic these fellas put out. As a trio, Taylor (drums), Bill (guitar), and Joe (bass), create a sound that is warm and comforting.

Their harmonies roll easy and wide like a spring river and their lyrics evoke a “home with nature” feel. Don’t let me mistake you, these Billy’s can rip it, but what’s more remarkable is the fun they seem to have on stage. That is after all what it’s all about, right? While their debut album, Walk in the Woods, was released in 2016, the three brothers have long been into playing music.

They decided to stick together and truly focus on making music under the Kenny Brothers Band in 2014. Drawing influence from some of the heavy-hitters like the Band and the Grateful Dead, they are completely able to separate themselves by creating their own sound. I’ve heard the term Mountain Rock being thrown around and, while this may totally be accurate, it’s also a bit vague. At times they can be funky (Vampire), folky (Pick Me Up (Side of the Road)), bluesy (Agitated), country (Old Man Callahan). They’re able to take a wide variety of genres and harness and funnel them into the Kenny Brothers Band. And while an inexplicable number of bands have tried do just that, not too many ever get there.

These boys are greeting them all at the door. Come the end of October, the Kenny Brothers will be slowing the gigs in focus on writing new music.

I left Fall Foliage on Sunday with a complete sense of awareness. My head was spinning with jubilant memories of a place I never knew existed, and I had a phone full of fresh new numbers of the people who took me in like family. I spent many hours sitting by the bonfire, conversing with an array of different souls, with different backgrounds, and felt that overwhelming sense of community, love, and a coming together like no other. There was an abundance of it and it had me brimming with pride and hope for this fairly young festival.

Then we were all suddenly shook to reality with the news of the horror that happened in Las Vegas. Coming from such a high and being crushed to dust in a split second was as real as it could get for me. But taking from that weekend all the good that was smeared around in such a small, tight-knit group has me as confident in our future as I’ve ever been. Until next year Hive Tribe….