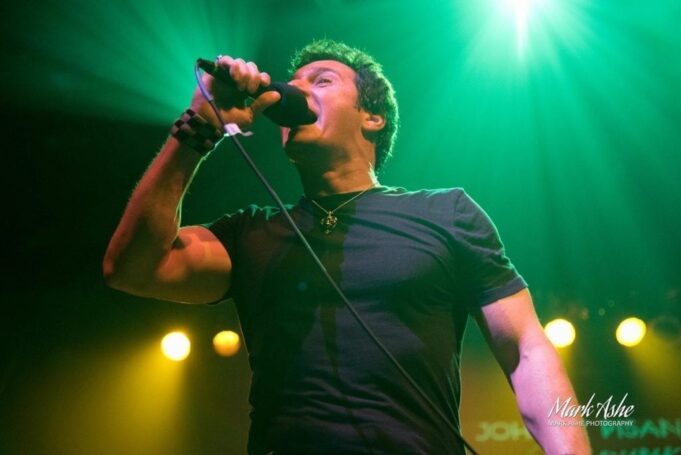 Johnny Pisano rocked the Gramercy Theater to a packed house on Wednesday night. It was only Pisano’s second show ever fronting a band. The native Brooklynite has been playing bass and singing for top bands for 30-plus years. Pisano played and or recorded with Marky Ramone and The Intruders, Willie Nile, Bruce Springsteen, Jesse Malin, Billie Joe Armstrong, Ryan Adams and Joan Jett just to name a few and is currently in Willie Nile’s band on tour. Pisano’s band includes Pisano on guitar, Rob Baily on lead guitar, Rick Mullen on Bass and Jon Weber on drums. Pisano is supporting his tremendous debut record Johnny Pisano’s Punk Rock Pizzeria.

The concert starts off with recorded music of the Mighty Mouse theme, which Johnny Pisano re- recorded for the record, several seconds later we see Pisano rush to the stage wearing a red cape finishing off the theme, “here I come to save the day…” then he and the band go into full tilt punk rock mode for Superhero.

At the start of Pilicious Bitches, Pisano (sans cape) and the band start to sing the classic Italian song, (with different lyrics) Che La Luna aka Lazy Mary sung by Pisano in a voice that mimics1950’s records. Then, the band rips his into the song about pizza! The crowd is jumping, as Pilicious Bitches recalls the punk era of the seventies. Next up is The Know It Alls , the first song from the record. Pisano’s singing with rapid fire lyrics and the crowd is loving every minute. Midlife Crisis has a Green Day band feel to it, Pisano puts it all out there, leaving nothing in the proverbial gas tank.

For a full gallery of photos from that night visit Mark Ashe Photography’s album here.

Blank Generation is a cover of the Richard Hell and the Voidoids song with some outstanding guitar work by Baily and Pisano. Maloveilove, the single to the record is a great catchy tune and it seemed like the entire audience knew all of the words. Johnny Pisano brings out Bobby Mahoney of Bobby Mahoney and the Seventh Son on guitar and vocals for the Willie Nile anthem One Guitar Mon’. Don’t Think is a Ramones inspired tune in both the length and in it’s quick intensity, especially the guitar work of Baily. Rounding out the whiz-bang set is All Fucked Up From Growing Up. The band here really sounded amazing and they reminded me of Green Day’s early days. For only his second time as a frontman Johnny Pisano, put on an awesome show. He’s got a strong record with super material when played live. Be sure to check him and his band out whether he’s solo or with Willie Nile or other local bands around the New York City area.

You can find Johnny Pisano’s Punk Rock Pizzeria at local record stores in the NY/NJ area, at Johnny Pisano and Willie Nile shows as well as from iTunes/Apple Music, Spotify, CD Baby, facebook.com/JohnnyPisanoPunkRockPizzeria and JohnnyPisano.com.