It is a widely-accepted opinion in the prog rock world (and beyond!) that Carl Palmer is one of the best drummers out there. At age 67, Palmer puts most whippersnappers decades younger than him to shame with his bombastic style. He will bring all his power and dynamics to the Ridgefield Playhouse in Ridgefield, CT this Sunday, October 8th.

It seems Palmer has been traveling almost ceaselessly since the beginning of the year on his ELP Legacy Tour. He is best known for his work in the legendary prog rock band Emerson, Lake and Palmer, of whom he is sadly the last remaining member- Keith Emerson and Greg Lake passed away in March and December 2016, respectively. As if the loss of both of Palmer’s bandmates in less than a year wasn’t enough, John Wetton- the bassist and vocalist in Palmer’s supergroup Asia- also succumbed to cancer in January 2017. Palmer has been soldiering on, however, in good health and spirits to properly commemorate his friends and coworkers. He now performs with guitarist Paul Bielatowicz and bassist/Chapman Stick-ist Simon Fitzpatrick who make up for what they lack in age with sheer talent.

Read my review of their all-too-brief show on YEStival Tour at Foxwoods Casino this past August HERE.

I have been fortunate enough to see Carl Palmer’s ELP Legacy thrice- twice in this past year and once in 2016- on my 28th birthday (June 15th) and at the Ridgefield Playhouse, to boot! With the sonic fury that comes from the stage it’s fairly baffling to realize there are only three men performing. The setlist is a combination of ELP songs- both the original songs and the classical compositions on which the trio put their own proggy spin- and some surprises. Let’s just say the world of progressive rock is small and Palmer borrows a song or two to memorialize his prolific fallen bandmate, Greg Lake.

Read my review of their show at the Bull Run in Shirley, MA this past May HERE.

Did I mention not only is Carl Palmer a kickass musician, but he’s also a lovely chap? He offers meet and greet/ticket packages to fans. Fans can upgrade their seat purchases to include a meet and greet with Carl, Paul, and Simon and listen to their soundcheck and get their photo taken with them! I took advantage of this offer on my birthday last year and the guys couldn’t

have been more lovely. I had them sign my hastily-made sign declaring it was my birthday at the end of the show autograph line, too. There is simply no ego or typical “rock star” attitude to be seen and for that I love this group even more.   Carl Palmer’s ELP Legacy plays their last American date at the Ridgefield Playhouse this upcoming Sunday, October 8th, before they head off to Canada and then overseas to Palmer’s motherland England and beyond. The Playhouse, located in the quaint town of Ridgefield, CT, has been a fixture in the New England concert and fine arts scene since its opening in 2000. Not only will Carl Palmer grace its stage this weekend, but acts as diverse and impressive as Vanessa Williams, the Martin Sexton Trio, Garrison Keillor, and a performance of Joseph and the Amazing Technicolor Dreamcoat will also happen later this year. All in all, if you’re a fan of Emerson, Lake and Palmer and are in the area of Connecticut on October 8th, the Ridgefield Playhouse is the place to be. Carl Palmer and his bandmates Paul and Simon put on a show that shouldn’t be missed by any self-respecting lover of progressive rock. I can say with utmost confidence you will thoroughly enjoy yourself. 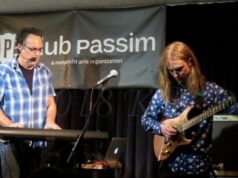 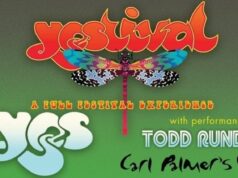 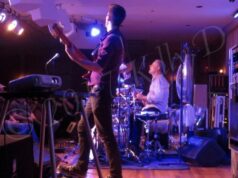