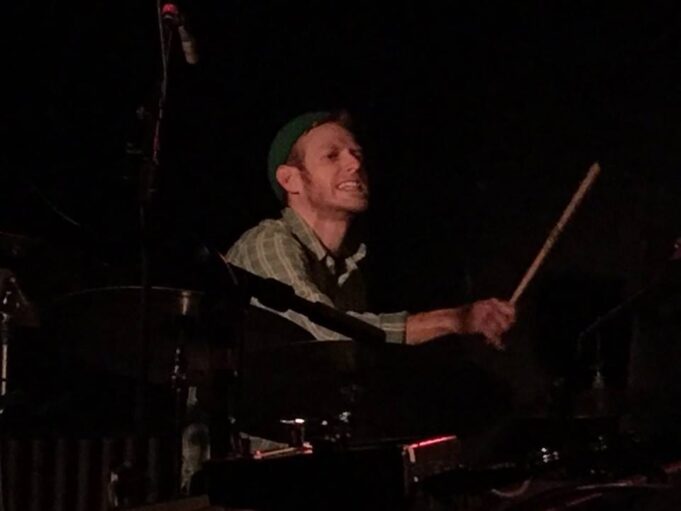 In a lucky break as we pulled into downtown Northampton we were able to easily grab a parking spot one block from the Pearl Street. I had a quick job to do (bring posters to Bishop’s for the DEC 30th show with rice – An American Band) so I could hear the start of the show as I walked past the Pearl Street. Back in a flash we entered the venue, had no problems cruising through security, and got into the show. We were greeted by a couple hundred revelers enjoying the first Northampton appearance of the John Kadlecik Band.

I greeted my friend Alan who was taping (and supplied the photos and video that accompany this article, thank you Alan!) and settled in for Tin Roof Shack. I must have missed They Love Each Other, but luckily Alan captured it.

The Peter Rowan penned the song but fans may know it from versions by Phil Lesh and Friends or even Golden Gate Wingmen. Catfish John followed and illustrated the vocal strength that this band is bringing to the table, with all three front line members harmonizing beautifully. Klyph Black on bass, Todd Stoops on keyboards, and of course John Kadlecik on guitar and the majority of the vocals. They are joined by Nathan Graham on drums.

For me, one of the highlights of the show came next with Klyph Black taking lead vocals on the Jefferson Airplane classic Good Shepherd. Black was able to channel the original vocals perfectly while adding his own flavors. The band jams exceptionally well on this song, using the simplicity to squeeze tone and emotion out of the form, building energy and intensity throughout. I love me some Klyph Black.

The fairly surprising Way to Go Home came next, Kadlecik’s nod to the late Vince Welnick of the Grateful Dead. It’s safe to say that really no one else is keeping this song alive within the songbook. When I asked him about it last week having seen the song on a set list Kadlecik replied that he has been playing it in his sets sparingly for over a decade. Like with Good Shepherd they do a great job of building intensity.

The rest of the show unfolded with one great song after another. Dead tunes, Jerry Band tunes, Kadlecik originals all unfolded with ample opportunity for every member to showcase their talents and their unique take on these classics. The band is solidifying in a way that I had yet to see from them before. This particular four piece lineup has been solid since last Spring- with Stoops splitting time between this band, Reed Mathis’ Electric Beathoven, and stints with his old band Raq. The guys are gelling in an excellent way, becoming comfortable with the paths that each of them are taking musically, complimenting each other and leaving room for exploration.

My favorite moments of the second set included another Klyph Black vocal in The Other One. In the midst of it a John Kadlecik original, an instrumental titled Your Mileage May Vary unfolded for a good five minutes, before the band returned to The Other One. During YMMV Kadlecik accessed his midi effects and put an amazing saxophone sound that was really cool, and authentic in sound and tone.

Kadlecik will be spending the rest of 2016 splitting his time between solo Acousti’Lectric appearances all over the eastern half of the US, four shows this coming weekend with his Jerry Garcia Band tribute the DC Mystery Cats, and another half dozen or so John Kadlecik Band shows. Check out this article to see all upcoming dates.