I had not been to Irving Plaza since I saw Start Making Sense there a few years ago and I was very stoked.  I got a parking space and saw one of my taper buddies and we walked to the venue together.  It was surprisingly easy to get into the city, making my four hour trip from northern MA not so unpleasant.

I made my way inside and had a great time hanging out with some of the guys before the show.  I spent probably the most time I have ever spent with Reed Mathis and we discussed at great length his thoughts on the origin of jazz, projects he’s done with Steve Kimock, but most memorably, we spoke quite a while about the new album he is hoping to release in the Fall.  More on that at some point, but we sat and listened to many of the cuts which have an amazing cornucopia of well known musicians, and it was a great pleasure to talk to him about the songs, the origins, and his plans for the future.

The Wingmen took the stage around 10:30 or so, pretty late for this crowd, but it’s New York and it’s a Saturday night, so let’s do it!  They opened with what has become a staple for John Kadlecik projects especially for shows in New York, John Lennon’s Nobody Told Me.  I really like how it shows that Kadlecik thinks about where he is in relationship to the set list, and that we both show an admiration for Lennon makes me feel like there is a connection between him and the audience, the music and the people watching it being made.  Reed Mathis took a turn at the vocals next with the Grateful classic, Brown Eyed Women.

The vocals stayed with Mathis on this take on Bob Dylan’s Lovesick.  I’m not familiar with the song, and I don’t know if the Wingmen have played it anywhere else ever, but for me it was a first.  It has some nice driving breaks in it, and gives the band opportunities to all hit together rhythmically which I like.  Next up John Kadlecik’s Hard Highway, a song he must have started with his old band Hairball Willie in the Chicago area.  Another Grateful classic Deal continued the set and was solid.  Tin Roof Shack, a little ditty by Peter Rowan released about ten years ago was sung by Kadlecik.

The set closer was Feels Like Dynamite-  a song by King Floyd that I got to know regularly through Merl Saunders.  For me, this is a great illustration of the strength of this band on so many levels.  Since Saunders passed, who the heck else is playing this song that was once a regular part of the scene?  It takes a band of this level not only in skill but also with the ability to act as our musicial sociologists, Grateful ethnocologists- to take us to the varied places we need to go in a show.  Additionally, I was at this show with friends, two of my dearest, and we were able to reminisce about seeing Merl and his band back in Oregon and California playing this song, and to talk about “Who the heck did we go to those shows with back in the day?”  With apologies to other bands playing this type of music, you can’t take us there the way the Wingmen can.  To bring friends together from all over the US and to take us on this musical journey into our own past and into our collective future- it takes musicians as strong and aware as the Wingmen.  With that the set closed, and many there were relieved for the chance to get a drink and a breath of fresh air. 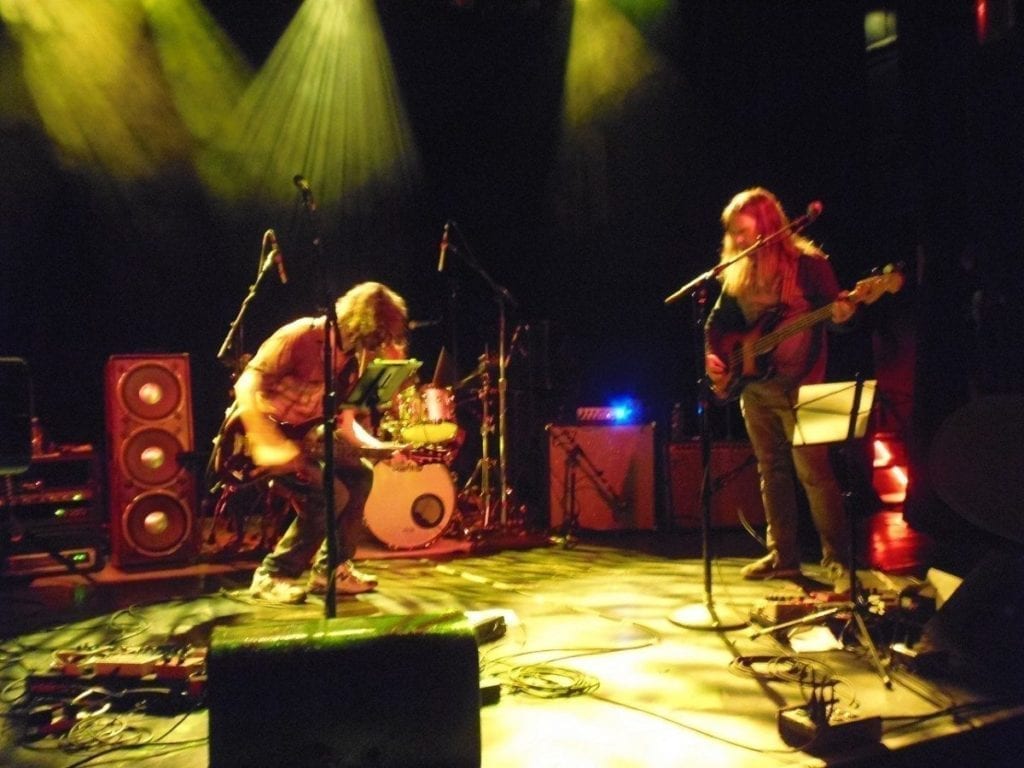 Some of us remarked that set one didn’t feature a ton of Dead material, though it was in there for sure, and I had a feeling that we were in for some more in the second set.  The set opener Sugaree was proof of my suspicions and it had a real grooving, swinging feel to it.  Mathis opened with prominent bass lines helping to establish the feel which was real different from the original without changing the pace all that much-  I’m not well versed enough in New Orleans music to identify it totally, but it had a nice jazzy swing to it that felt like the Crescent City to me.  A sneaky and borderless transition to Dark Star further reinforced my set break suspicions and the crowd was now at full attention and eating up what the Wingmen were dishing out.

Up next was a song called Far Enough which appears to be a Reed Mathis original that’s been broken out on this tour.  In 2006 Mathis released an album with Sean Layton on which it originally appears and it’s just fantastic to hear this band bringing new songs to the songbook.  Not that I don’t love the Dead material and other cover songs that they are playing but to have new music, in addition, is really something that is setting this band apart from others.

Walking in Your Footsteps by the Police has been a staple for Kadlecik in his variety of bands, and in the hands of the Wingmen it becomes a psychedelic exploration.  There also appears to be additional lyrics that are coming out in Wingmen versions of the song that I’m not sure exist in the original- the song seems to, for me, reside in the same space that Dark Star did for the Dead, a somewhat dark piece that can be taken in a million directions and back again- an exploration that showcases the ability of band members to amaze and inspire.

Estimated Prophet was sung expertly by Mathis and lead into Eyes of the World, helmed by Kadlecik- and both were played impeccably.   Another Reed Mathis led song, Bob Dylan’s Ring Them Bells again brought me to an inspirational place.  Like the time I saw them play this in New Haven, it has a gentle and angelic feel, like maybe the bells being rung are in a cathedral.  Mathis’ love of Dylan shines through in his song choices with GGW.

This band would not end on a contemplative note though, for this was a party- in New York City on a holiday weekend.  So we all got down together with the classic Going Down the Road Feeling Bad.  After a very short break, it was getting very late after all- an encore of Dylan’s When I Paint My Masterpiece was the perfect capper for anight of exploratory music.  To be able to come out of the journey with a quick and concise song like this, is the sweet dessert you need.

I can’t say this enough, and I’ve said it before-  Golden Gate Wingmen are providing something sorely missed in the modern scene.  The ability to experience music that we love and revisit it over and over again, but also to explore, to discover new music, to remind us that this scene is not a nostalgia scene, but a vibrant creative collective of musicians and fans, who together are making new music and will be for decades and centuries to come.