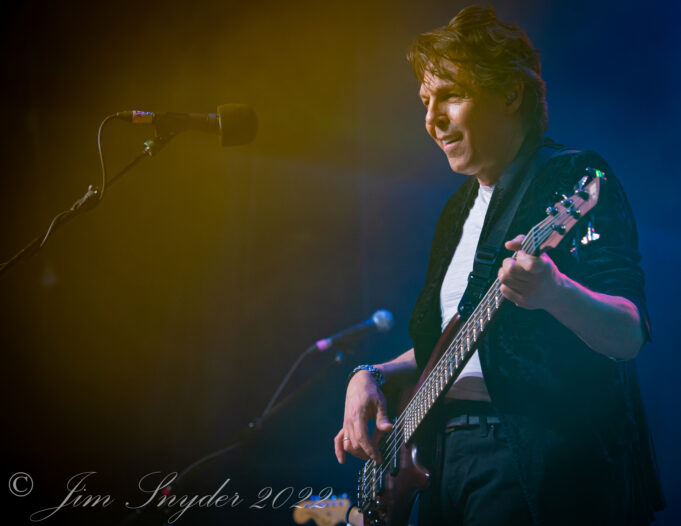 Utopia was an innovative pop pop band for the late 1970’s thru 1985 who break all the rules. The band was always changing their performance style from album to album and they managed to consistently keep my interest because I never knew what to expect out of them. They were a strong four piece band with vocals, edgy guitar and keybord work.

The band is now called Kasim Sulton’s Utopia and is comprised of Lloyd Laudesman on keyboards , Matt Beck on guitars, Andy Ascolose on drums, and multi-instrumentalist Kasim Sulton on bass and lead vocals. This is Kasims second version of Utopia he has been touring on and of over the last 3-4 years since there final tour with Todd in 2018.

On this night the band performed at The Arcada Theatre in St Charles Illinois. I really enjoy this room as it is on the smaller side, with about 800 seats. This theatre features good sound and a nice high stage large enough to allow the band to spread out and truly perform.

A funny thing, and also not so funny, for me is that a week before this show I broke my leg and had to take photographs on one leg, perhaps a first for me in a long history of shooting shows.

Kasim is always so at home in Chicago and he makes everyone feel so warm and welcome. The band performed some of my favorites including “Fix My Gaze,” and I am in love with the song “Caravan.” I had not seen a show for over four months so it charged my battery and reminded me alot of my youth when I first cut my teeth on Utopia.

I Just Want to Touch You

Call It What You Will

Love With a Thinker

Swing to the Right

Princess of the Universe

The Road to Utopia