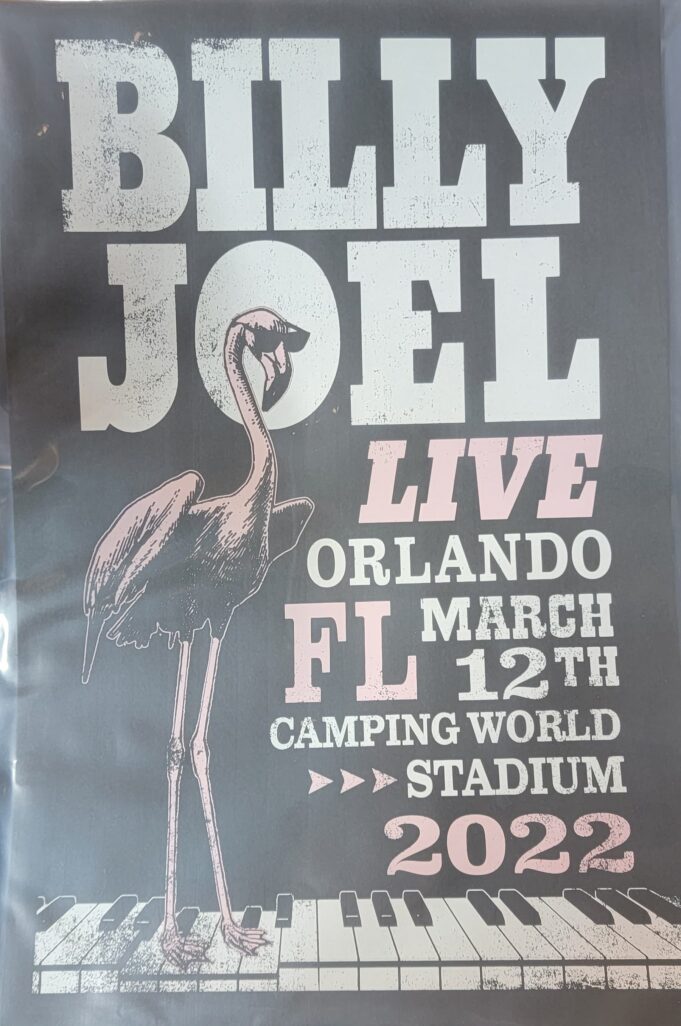 Billy Joel, the “Piano Man,” brought his Steinway piano to the stage of the Camping World Stadium on Saturday evening playing for a sold-out crowd of upwards 45,000 fans. This tour for Billy originated on January 7th 2014 in Sunrise Florida (I was there) and, here we are eight years later and still going strong at show number 182 for a tour that has gross revenues of nearly 450 million dollars.

Billy Joel is one of the best-selling artists of all time with over 160 million records sold. Joel has been nominated for 23 Grammys and was also inducted into the Rock & Roll Hall of fame in 1999. In 2013 he was named a Kennedy Center honoree.

In addition to being the multi-talented musician and distinguished gentleman we know through fame; Joel is also a huge philanthropist with his organization “The Joel Foundation” that was founded with the purpose of music education and funding for programs. Not just music, they helped with PPE during the heart of the pandemic, food programs, and just recently donated a whopping two-hundred and fifty thousand dollars to help the refugees in Ukraine.

So, a historic man in a historic landmark. The Camping World Stadium has seen its fair share of famous acts, to the likes of Guns & Roses and The Rolling Stones, along with hosting a college football bowl game every year since 1947 except 1973. The record attendance for the stadium was held at WrestleMania 33 on April 2nd 2017 with 75,245 fans. It was also one of nine venues used for the World Cup in 1994 in addition to hosting the NFL’s Pro Bowl four times. Billy has only played Orlando three times in the last decade. This stop marks the only stadium appearance in Florida for Joel in 2022 and the first concert at the stadium since the pandemic started two years ago.

Appropriately Billy Joel started the show with the old science-fiction tale of the fall of New York City told from the confines of Florida, “Miami 2017 (Seen the Lights Go Out on Broadway)” to the roar of a very cold sold-out stadium. Joel did not stop a beat as he asked the crew for more light on the band as they busted into the rocking hit “Pressure.” Billy then welcomed everyone to Alaska and proceeded to joke about how cold it was here at the Camping World Stadium winter wonderland and that the last time he went camping he froze his ass off too!

It was now time for one of my favorite Billy Joel songs released as the only single from the 1974 album Streetlife Serenade, “The Entertainer”. This song featured the magic fingers of Dave Rosenthal on the keyboards. Joel could not take the cold any longer himself as he donned a winter hat while joking to the crowd.

It was now time to hold your date closer, if you already were not, for a little slow dancing to “Just the Way You Are” and we love Billy just the way he is as he thanked the fans for coming out in the cold to watch him on a screen. He assured the crowd that if he could play the piano and run around the stage at the same time he would, but the only way he could pick it up is if he were pissed off and had to throw it. The world is a mess as Billy has stated, he played a little number in support of Ukraine titled “The Bogatyr Gates.”

The great thing about seeing a Billy Joel concert is that you feel as if you are sitting right there with him at a pub and he’d be your best friend that knows everything to say. This night will be packed with hit after hit, but this next single was not a hit, but it is a fan favorite. The tropical sounds of “Zanzibar” filled the cool stadium air and warmed it mentally a good five degrees. “Zanzibar” featured the talented brass skills of Carl Fisher on the trumpet with some very nice soloing.

The beautiful melodic “Vienna” that features the classic Joel vocals combined with his distinct piano sound that we know. Staying with the same 1977 album, The Stranger. Billy reminded everyone that working too hard can give you a heart attack, ack, ack, ack, ack, with “Moving Out.”

The show turned into the largest sing-along as every fan word for word sang “every drunk must have their drink” with the 1980 hit “Don’t Ask Me Why”. The crowd was warming up as the Florida night was growing colder. With weather this cold it could only put us into a “New York State of Mind” that Joel decided to have fun at the end of the song with the crowd. Sticking with the weather theme the 1989 album Storm Front, brought us “I Go to Extremes”, which Joel joked about it even being on the setlist tonight.

The whistle was blowing that meant only one thing. It was off to “Allentown” for the promises our teachers gave, as the crowd danced along singing in harmony. Another (you cannot have just one, or two, or three) favorite Billy Joel song of mine was next. Billy slowed it down with the loving ballad “She’s Always a Woman to Me” that had the crowd filled with love. It was time to relive a special sitcom of my youth with the Bosom Buddies Theme song “My Life” from the 1978 album 52nd Street. This song had the sold-out crowd singing with authority.

It was time for our second cut from 1980 Glass Houses album, with you guessed it, another favorite of mine! “Sometimes a Fantasy” Billy Joel has more hits than even us fans can remember. Tonight, proved I would rather laugh with the sinners than cry with saints because sinners have much more fun. “Only the Good Die Young” was the next chart-topper of the evening. It was time to jump in the gondolas onto “The River of Dreams” that left everyone dancing in their seats to a tease of the classic Marvin Gaye written song “Dancing in The Streets” that segued back into “The River of Dreams.” Mike DelGuidice took control of the entire stadium with his tenor opera vocals on “Nessun Dorma” a story about love at first sight to a beautiful but cold Princess.

If this sounds like “Scenes from an Italian Restaurant,” It’s because it is. Grab your bottle of red or bottle of white, it all depends upon your appetite. Orlando was now fired up after reconnecting with Brenda and Eddie, but even as I type this, I am getting chills.

I do not care who you are this next song will be part of your life at some point. So, sing us a song you are the “Piano Man” sing us a song tonight, we’re all in the mood for a melody and Billy Joel had us feeling all right. Every cell phone in the stadium was lit up as the fans sang every word in tune unrehearsed like a church choir.

Billy and the band thanked the crowd and exited the stage. The fans chanted and cheered as Joel returned to the stage for the iconic “We Didn’t Start the Fire.” How many people do you know that can sing all those lyrics without looking? Society is still waiting for an updated version of this song Billy. (Hint, hint)

The classic 80’s hit “Uptown Girl” took us deeper into the encore as the crowd danced and sang alike forgetting about the chilly temperatures at this point. “It’s Still Rock and Roll to Me” was the third track from Glass Houses, and Billy and his band showed zero signs of letting up by rocking right into the arrogant “Big Shot” right into “You may be Right’ that had snippets of Led Zeppelins “Rock & Roll” played throughout. Billy Joel thanked the fans for coming out once again and the stadium lights came on and everyone, I mean everyone was in awe. Let’s face it Billy Joel could have sold out five nights and had five nights of different music.

What are you waiting for? Go See Live Music. Till The Next Show……. Joel

Miami 2017 (Seen the Lights Go Out on Broadway)

Just the Way You Are

Don’t Ask Me Why

I Go to Extremes

Only the Good Die Young

The River of Dreams (With “Dancing in the Street” interlude)

Scenes From an Italian Restaurant

Encore:
We Didn’t Start the Fire

It’s Still Rock and Roll to Me