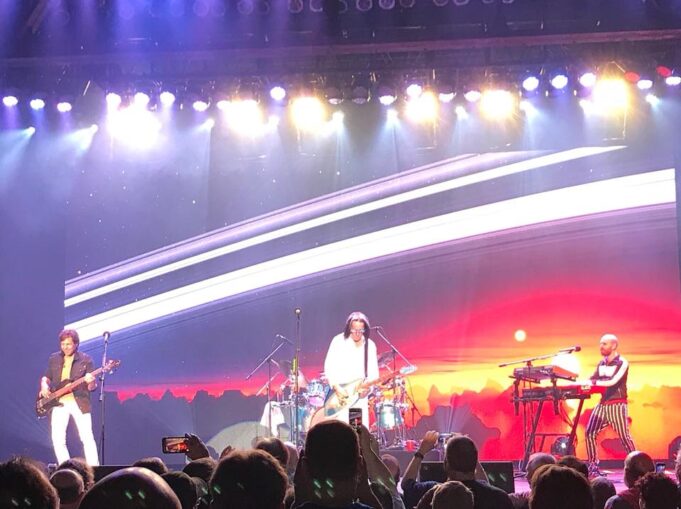 It’s been 25 years since I last saw Todd Rundgren and Utopia. And since they disbanded in 1986 I believe it was on my wish list for them to reunite. I have spoken to many fans and there hopes were mine as well and last night at The Paramount Theater in Huntington Long Island that wish came true. Big time.

From the onslaught of the prog rock side of Utopia they decided to dig deep and open the show with Utopia Theme then into The Ikon both off of the 1974 debut release of Todd Rundgren’s Utopia. After playing Another Life even Todd suggested let’s pull the reigns back a bit on the prog rock and they slipped into The Move’s Do Ya which I know from ELO. The next left field choice was Leonard Bernstein’s Something’s Coming from West Side Story. Huh? Needless to say it was awesome. But Todd is g-d so he can do no wrong in my book. Mountaintop and Sunrise from RA brought back the proggyside of the set but with hooky melodies that I love from this band.

Closing out the first set was Last of the New Wave Riders. Hearing that just brought me back to seeing the band with all four original members. Unfortunately this time round Roger Powell was not up for touring in 2018. Gil Assays did an outstanding job with all the synth arrangements and singing background vocals as well. With Roger not being there I knew I would be missing a few tunes I sorely missed such as Caravan or Feet’s Don’t Fail Me Now. I knew the second set would have some of the Utopia classics on tap. Opening with Road to Utopia and further down the line Swing to the Right, Trapped and then Kasim Sultan’s Set Me Free was outstanding. Everyone was in fine vocal form throughout the night. Every now and then I would catch the interplay between Kasim and Todd whenever Todd would hit a clunker on the guitar. They would just laugh it off which to me meant they were having fun. At 69 years of age Todd’s voice was still just as soulful as it was in the mid 70’s for sure.

The classic Love in Action was rockin like it was 1979 again. Hammer in my Heart crushed. The surprise was Kasim’s I Will Wait off of Portrait. I always loved that tune and to hear unexpectedly was pure joy. The disco groove of Rock Love had the crowd wanting to bust out of their seats but that did not happen. Yet. The show had about 20 rows of seats on the floor. GA all around the seats and then seats in the balcony. Reason I bring this up was because I was hoping to bust a move but everyone was sitting and the audience on either side of us were moving and grooving. Don’t get me wrong I was grooving sitting down style but oddly enough when the band busted into Love Is The Answer not a rocker by any means the crowd erupted and stood from here on out. Finally!

“Light of the world shine on me, Love is the answer. Shine on us all set us free, love is the answer.”  The crowd was singing and hanging on every word of this one. One World “one world, one love, one all we’re a circle together.” You sensed a theme in the air with these last masterpieces. The message was loud and clear that we need to look out for each other and care about each other in these weird troubled times. The band encored with Just One Victory always a closer since I’ve been seeing the band. When I was younger I was always like why end with this song? It’s not a rocker. But now that I am older I couldn’t see them ending with anything else. Here are the lyrics continuing with the theme “We need just one small victory and we’re on our way, praying for it all night praying for it all day give us just one victory it will be alright.”

From the video channel of FunFamily6

Set I Utopia Theme The Ikon Another Life Do Ya (The Move cover) Freedom Fighters The Wheel Back on the Street Something’s Coming (Leonard Bernstein) Monument Overture: Mountaintop and Sunrise Communion with the Sun Last of the New Wave Riders

Set II The Road to Utopia Play This Game Swing to the Right Trapped Set Me Free Love in Action Hammer in My Heart Princess of the Universe I will Wait Rock Love Love is the Answer One World Encore: Just One Victory

Dave Diamond is one of the most talented drummers in the jam scene in the NY area, having toured all over the US with the Zen Tricksters, Reid Genauer and Assembly of Dust and countless other band.  Catch him with his Dave Diamond Band (tour dates below.)

Venue: The Space at Westbury

Notes: Dave Diamond band performs in The Lounge before Dark Star Orchestra and a tweener set on the break.