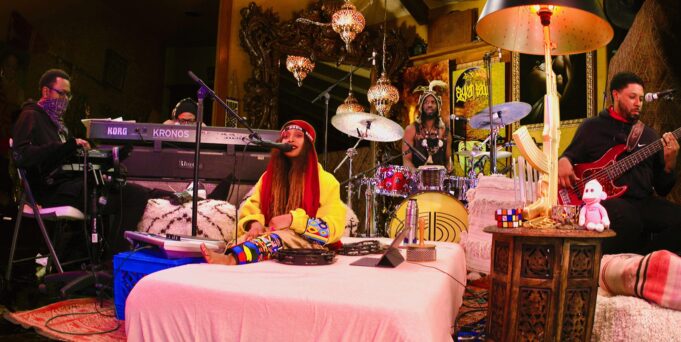 The current global pandemic has dramatically affected the music industry. Social distancing and stay at home orders have forced artists to cancel their tours and concerts. However, thanks to technology through music and video streaming apps, the artists have been able to keep their loyal fans entertained. Entertainment joints remain closed indefinitely, and bars and restaurants that have reopened are prohibited from hosting live music events.

The COVID-19 inspired restrictions have forced artists to move to platforms like Twitch and YouTube and other social media platforms to entertain their fans. Most of these online concerts are free, threatening the business side of things. As a result, artists started hosting paid livestreams.

In late March, Erykah Badu was the first artist to host a paid online show when she launched her live concerts dubbed “Quarantine Concert Series: Apocalypse, live from Badutron. “The charges for the concert were from 1 USD to 3USD. Also, instead of using existing streaming platforms, she built hers.

After setting the pace, others followed suit with many pay-per-view concerts emerging online. Other artists who have hosted paid events include BTS and Kpop, who celebrated their debut’s 7th anniversary by hosting the “BangBang Con” in July. The concert, which lasted for 100 minutes, was streamed using WeVerse, a Korean mobile app developed by the group’s label, Big Hit Entertainment.

Another industry giant, What the Duck, a record label from Thailand, hosted a music festival called Online Music Festival Top Hits Thailand featuring Thai artists like Scrubb, Tilly Birds, and Bowkylion, among others. The label had hosted other successful concerts before the music festival. They used Zoom to stream their events.

The new virtual concerts have significantly boosted the music industry ecosystem as apart from the artists, the others like crew, technicians, and sound engineers were also affected. Hosting virtual concerts brings everyone on board.
The success of these virtual concerts relies heavily on interactivity, production, and loyalty of fans. For instance, Badu’s concert was very interactive. She allowed the users to vote on the Show’s setlist and select the room she would perform in. Such actions help the fans to feel part of the event.

Online Music Festival Top Hits Thailand took the fan interaction a notch higher by incorporating the AR technology. With the help of enormous 360-degree screens, they displayed images of the audience. As is that was not enough, they enabled the artists to point out individual viewers and chat with them.

As artists and other industry players continue to adjust to the new normal, you should expect to see grander and more interactive virtual concerts. However, with the kind of investments being made to create immersive environments, the industry might have stumbled into its future.

You shouldn’t expect these virtual concerts to go away after the pandemic has passed. There are advantages that artists will taste, especially from the use of the technology that they wouldn’t want to part it. Therefore, for artists that haven’t started thinking about this “new normal” and are still waiting to go to the stadia for concerts, they might remain behind forever.