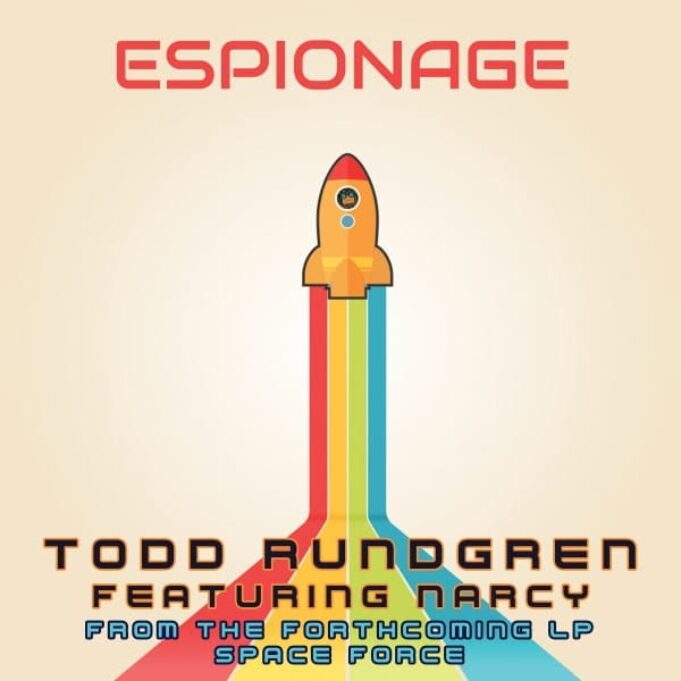 Following his critically-acclaimed album of collaborations, White Knight, released in 2017 on Cleopatra Records, rock legend Todd Rundgren is releasing a new single “Espionage” from his forthcoming album Space Force. In contrast to its futuristic title, Rundgren returns to the days of yesteryear when artists would release several singles first before releasing an “album,” or collection of singles. Thus, Space Force will be released to digital platforms as individual singles, each with its own unique artwork, every 3 or 4 weeks with the entire album coming in early 2021.

First up is a song as adventurous as Space Force suggests, the ambitious collaboration “Espionage” with Muslim hip hop artist Narcy.

“The song is actually an orphan of White Knight. Narcy and I began the colab in the final days of that album and we couldn’t get it finished in time, so in a sense it’s the first song of Space Force.” – Todd Rundgren

Keep an eye out for more Space Force singles including collaborations with Weezer’s Rivers Cuomo and idiosyncratic pop stars Sparks as well as a video for “Espionage.”

In other news, now that the convention has wrapped, Todd’s new re-record of his 1973 anthem “Just One Victory” has been provided to the Democratic National Committee for gratis use by all candidates running for public office this fall, from top of ballot down to dogcatcher .

Born and raised in Philadelphia, Rundgren began playing guitar as a teenager, going on to found and front Nazz, the quintessential 60’s psychedelic group. In 1969, he left the band to pursue a solo career, recording his debut offering, Runt. But it was 1972’s seminal Something/Anything?, on which he played all the instruments, sang all the vocal parts, and acted as his own producer, that catapulted Todd into the superstar limelight, prompting the press to unanimously dub him “Rock’s New Wunderkind.” It was followed by such landmark LPs as The Hermit of Mink Hollow and A Wizard, A True Star;  evergreen hit singles include “I Saw The Light,” “Hello It’s Me,” “Can We Still Be Friends,” and “Bang The Drum.”

Drop us a line at [email protected] with tyour live music news, show review, concert memory, or to say Hi!

Also, check out the search feature in the upper right corner, and seek out articles on your favorite artist, genre, venue, or event! Most articles have exclusive content you can only see or hear at LMNR- live show recordings or video.