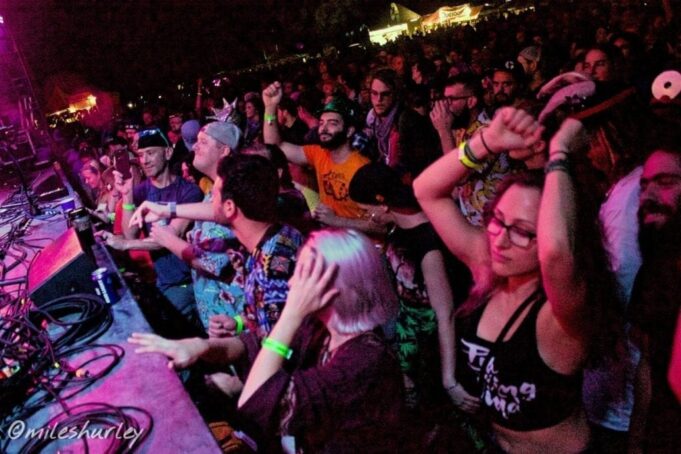 This review is comprised of material compiled by both Miles Hurley, and other staff reporters at the event.

Not a half hour goes by after I’ve arrived at the twentieth anniversary of Wormtown Music Festival, and I’ve met over five new people inside a swirling, joyous crowd of music fans.  Such is the nature of Wormtown! 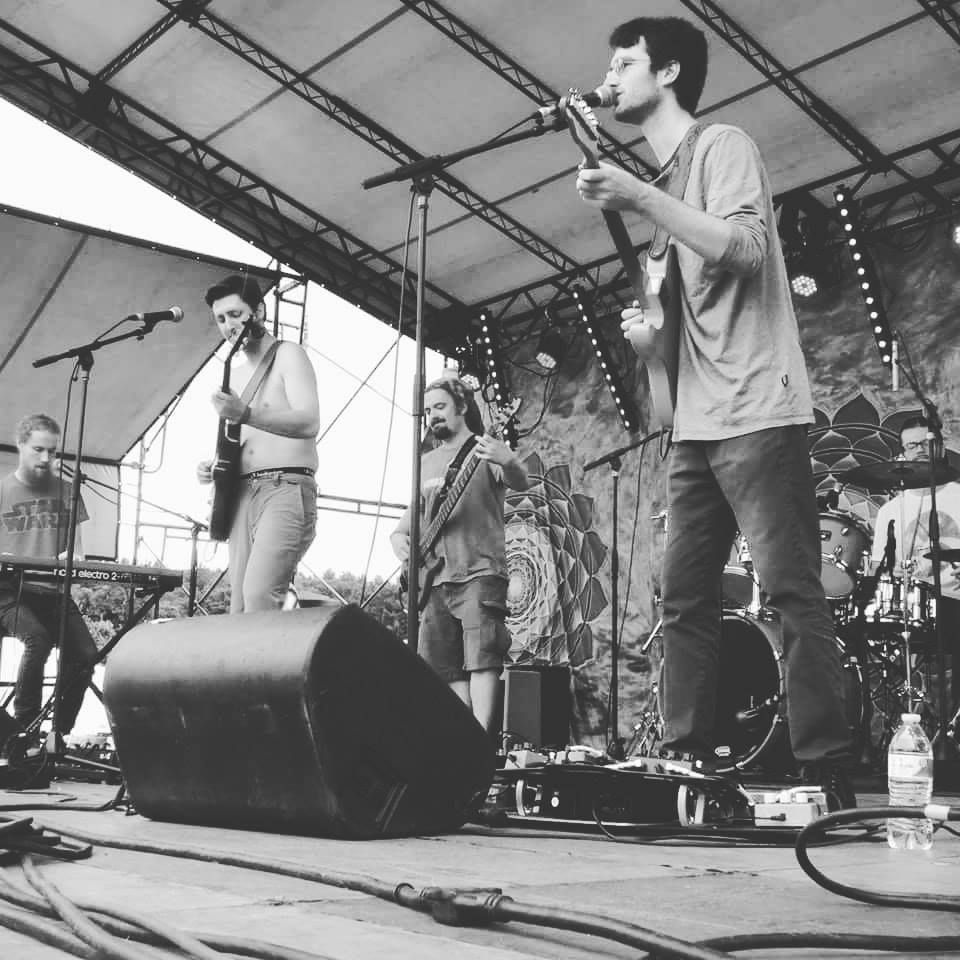 Friday morning dawned warm and sunny and the first band on the stage was Greenfield’s own The Diamondstones.  The band is a perfect fit for Wormtown with their upbeat jams and explorations.  They put out a tight one hour set and warmed up the stage perfectly.  As usual the band’ set included mostly originals but a few unexpected covers in Wild World by Cat Stevens and Fifty Way to Leave Your Lover by Paul Simon but also their great originals like Radiactive Milk. Full set audio:

A ton of photos by Miles Hurley are posted in this gallery.

Up next on the adjacent main stage (one of the great things about Wormtown, literally zero minutes of down time between main stage acts) Mundo’s Crazy Circus took the stage.  I have been hearing about them for a little while, but this is the first time that I had seen them.  They range from the expected jam and rock vibe to some more out there moments. Full set audio:

rice – an American Band took the stage for the second time Wormtown weekend.  Having completed a set the night prior in the early bird cabins, the seven piece band was warmed up already. It was one in the afternoon and it was starting to get warm, and the band opened the show with Bob Marley’s Cornerstone.  The set spanned many genres and included mostly originals until a trio of covers completed the set.  Emily Jones wowed again with the Cranberries Dreams (the only repeat from the night prior) followed by a little known song called The Italian Plumber Lawsuit by cult dark bluegrass band Woodbox Gang.  And the no brainer We’re an American Band to complete the set.

Worcester’s William Thompson Funk Experiment was next on stage, and also are Wormtown veterans.  The band is doing some deep funk, not party funk per se, but more sophisticated funk infused with jazz, rock, and more than a little bit of sarcasm.  With Turkuaz and Lettuce on this festival, some funk warm up was in order for sure.

Up next for me (after some lunch and an escape from the sun which had grown quite intense) was North Carolina’s The Get Right Band.  This trio from Asheville has been on Worm events before but it was my first time seeing them.  They reside in the general world of progressive reggae but are a tad more rooted in rock and roll than their Cali loving genre mates.  The songs tended to be on the 3-5 minute side, with basic pop and reggae melodies with only sparse dressing accompanying them.  I found myself longing for a greater melodic range and more sophisticated arrangements, but I appreciated their spartan feel.

Rounding out the later afternoon was mashup kings Pink Talking Fish. In addition to their normal heaping servings of Pink Floyd, the talking Heads, and Phish the band was able to veer a bit.  It’s unquestionable that the band is progressing.  I asked Richard James what was up with the Who cover, being outside of the band’s theme and he said “I don’t know but I know that I love that song!” The band had a number of people sit in with them throughout the set (see the set list below.)  And the show was happily interrupted by guitarist Dave Brunyak busting out his brand new Paul Languedoc guitar.  For any Phish fan and guitar player, this must be both a once in a lifetime and a must have purchase.

(Much of the remainder of this review was compiled by Miles Hurley.)

Complete strangers wanted to share with me their love for Zach Deputy, and he was playing as I walked into the scene with a full four piece band. 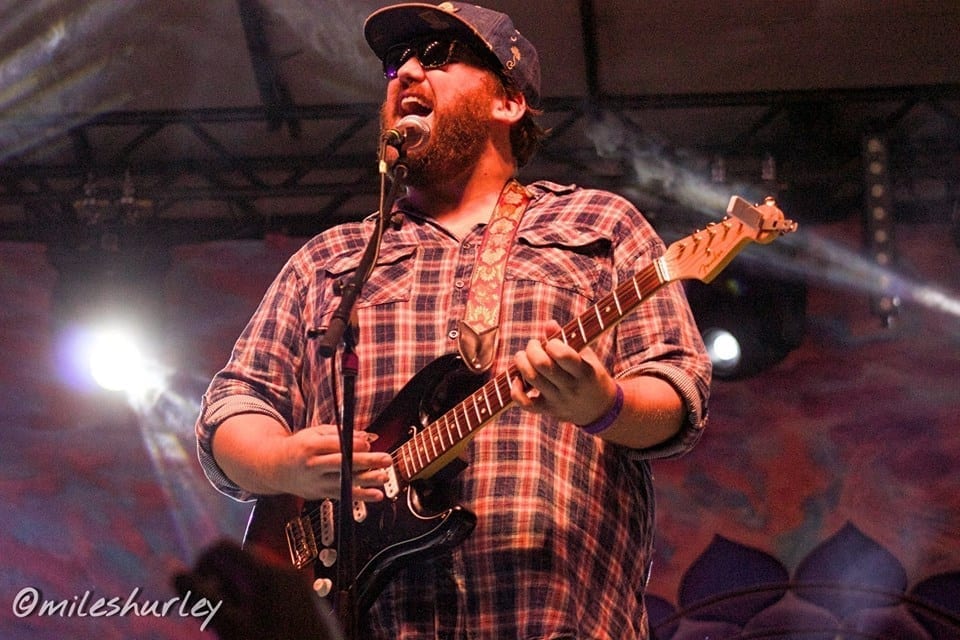 Neighbors helped me get to a good spot for photographs illustrating the Wormtown way of being. But that kind of spontaneous kinship is no secret nor surprise for those whom know the magic of Wormtown. “Welcome Home” were the words coming from the mouth of every worker and volunteer, and the phrase that was proudly displayed in lights on the trees high above Camp KeeWanee.

I landed in the main stage field to hear eight-member powerhouse Turkuaz blast off into action. Turkuaz cut their teeth early on at Wormtown and sister festival Strangecreek way back in the day, so for them to return for the festival’s twentieth anniversary as one of the headliners must have surely been special for them. 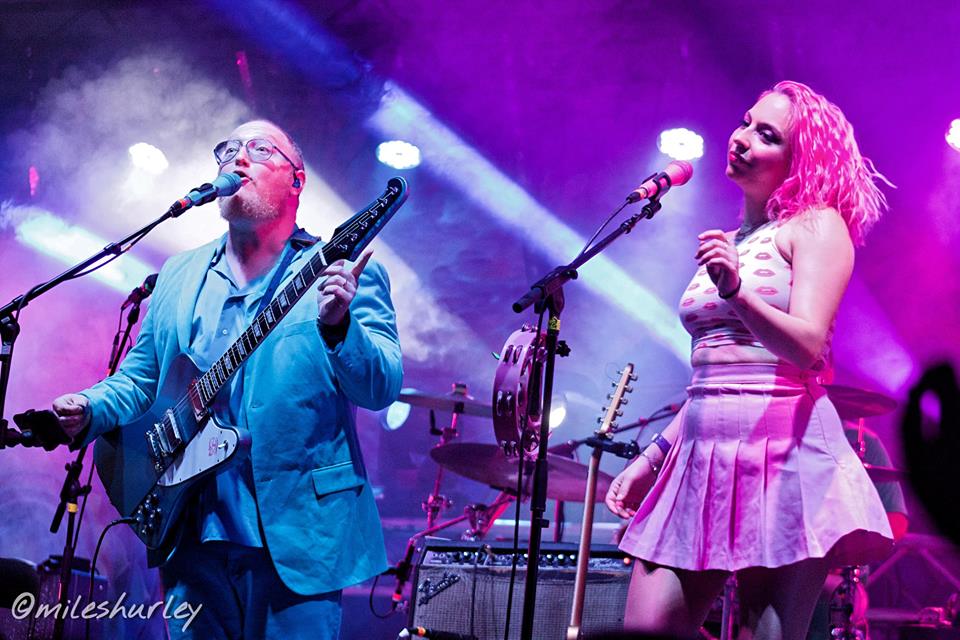 They started off with one of their newest tunes, “If I Ever Fall Asleep.” The field ballooned with a massive crowd, and the Brooklyn funk heroes floored the camp’s early partiers over and over with bombastic deliveries of originals like “Nightswimming,” “Bubba Slide,” and “Tiptoe Through The Crypto.”

Night one went with back to back big name headliners, with progressive slamgrass champions Leftover Salmon rocking it out next. Salmon eased into things, beginning with a funky “Gulf of Mexico,” and then offering some main stage bluegrass for the night. 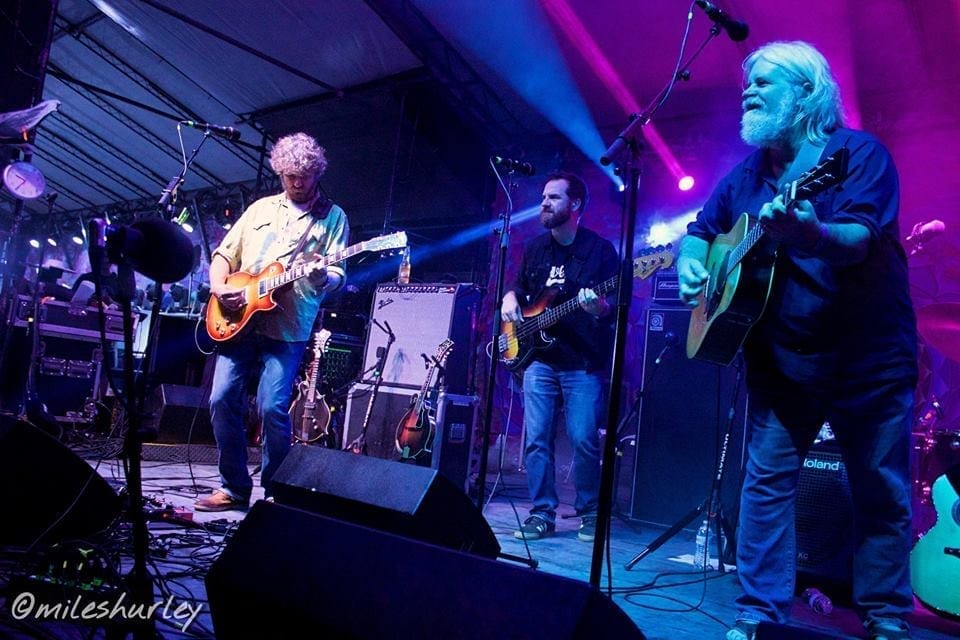 But the dynamic six piece reached the same level of energy as Turkuaz soon enough, like with their staple cover of Johnny Cash’s “Doin’ My Time.”

The Cash tune dove deep for some real psychedelic playing, propelled by the very heady pedal effects used by both banjo player Andy Thorn and keyboardist Eric Deutsch. Over the past year or so, Salmon’s rhythm section has been doing a drum, bass and keys interlude jam during each show, and this one at Wormtown was a good one. Flowing right out of a wild “Bird Call” jam, the rhythm trio snuck their way into an instrumental, extra wompy, dubby jam on Led Zeppelin’s “The Ocean.”

Camp KeeWannee late night music is the stuff of fame. Hosted inside a couple of campground cabins, it makes for an intimate experience that, because of the talent, always reaches arena level rock in its small spaces. People were buzzing during the day about a late night cabin Kung Fu set, and for good reason. The four piece funk masters have lately been seeing a nice rise in popularity, and so to see them play here in this cozy space might not be possible for too much longer. Packed into the intimate Wormtown Cabin, Kung Fu sounded heavier and more intense than they ever have. 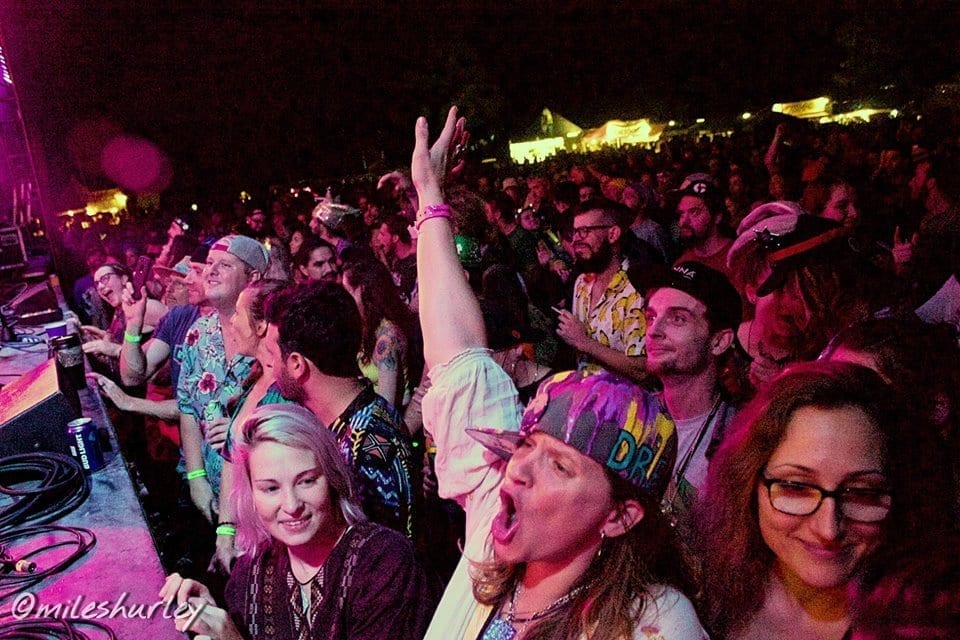 Their newest material combines their trademark breakneck funk with weighty, badass rock riffs. Guitarist Tim Palmeri and bassist Chris DeAngelis were both in full headbang mode at one point, and were certainly in sync with the front few rows of fans getting their faces melted off.

Similarly, there wasn’t any point during newcomer jamband Strange Machines’ entire set in which the KeeWanee Cabin was not at capacity. That means there was a bouncer that had to keep eye over a huge audience surrounding the cabin, peering in all the windows at this electro-groove quartet grooving it up past midnight. Strange Machines offered up many of their own cool covers, such as at the apex of their set which saw a terrficly jammed out sandwhich of “Feel Like a Stranger” -> “2001 (Also Sprach Zarathustra)” -> Feel Like A Stranger.”

The other late night cabin ended up hosting an impromptu all star late night jam that was anchored by the emcee of the Alchemystics, Force.  The band included a vast array of funk and reggae artists from the Pioneer Valley and Wormtown scene in general and came together in an improv manner.  Players included: Mike Wood (Rebel Alliance), Christopher Michael Jacques (of his self named trio, People With Instruments and oftentimes the Romano Project,) emcee  Tim Horton (The Problemaddicts) Force (The Alchemystics, The Problemaddicts), Dwayne Keith (Keepers of the Vibe and his own self named project) Samuel Belanger (Christopher Jacques Trio drums) Benjamin siwak (CJ3). Sean O’Connor (William Thompson Funk Experiment) Bryan McCullough (Terrafunk) and Ryan Sgori (Rebel Alliance) and probably more musicians than that even!  This set featured material that was just set up on the fly, lots of references and quotes, but not a real set list per se. 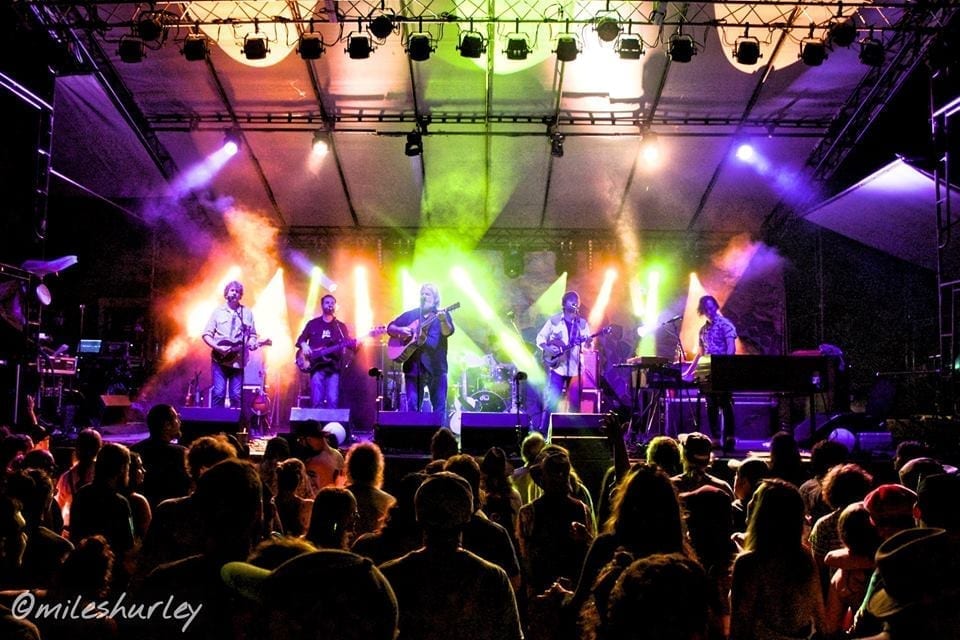 A ton of photos by Miles Hurley are posted in this gallery.