ZIONTIFIC Summer Solstice Music Festival moves to Moses Scout Reservation in Western Massachusetts! To submit a review or story for consideration hit us at [email protected] Check out the Live Music News and Review.com Facebook page for updates and announcements. From the YouTube channel of Jeff V:  https://www.youtube.com/watch?v=bXBJKtSYDh0 From June 15-18, 2018 Ziontific Productions will host their 8th annual Summer Solstice Music Festival at their new home in Russell, MA. Being a fully functioning Boy Scout Camp, Ziontific’s new venue boasts so many incredible amenities, you have to live it to believe it.   Some recently added sports for the whole family include: Basketball Court, Disc Golf, Human Foozeball, Climbing Walls, Tetherball. Don’t like sleeping in a flimsy tent? Too “old” to sleep on the ground? Need electricity for your phone, coffee pot, or curling iron? Ziontific now features some on-site “glamping” options. “Glamping” is a form of camping involving accommodation and facilities more luxurious than those associated with traditional camping. These options include Large and Mini Cabins, Canvas Tents (free with a VIP Upgrade), Car Camping and Neighborhoods. Additionally, Ziontific is now offering many comforts to their attendees. Camp Bathrooms with compostable toilets, Shower Houses (free with a VIP Upgrade), Water Stations to refill your reusable bottles and do away with plastic. 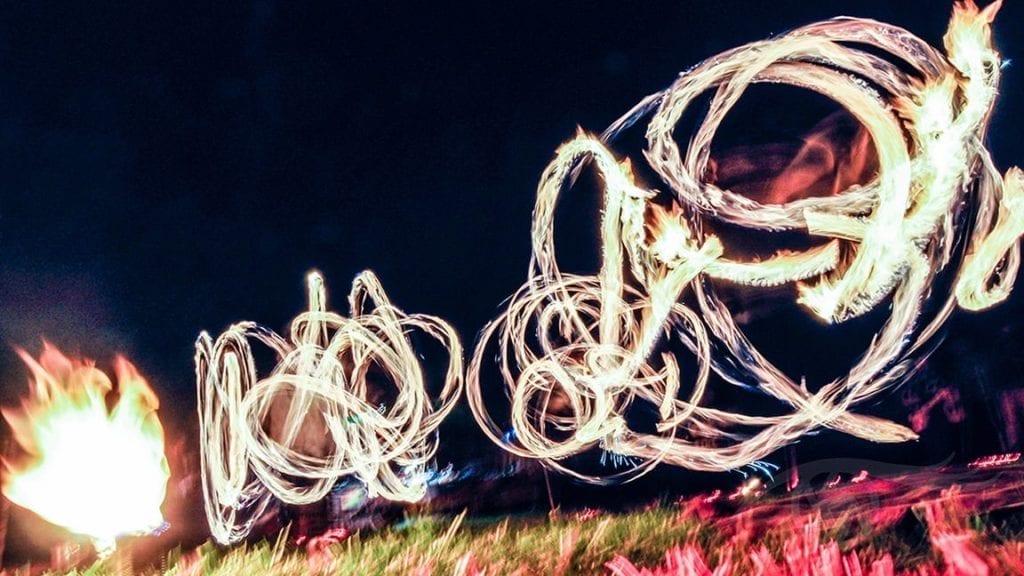 With artists coming in from across the country, Ziontific is broadening the horizons of the New England music scene. Staying true to their genre focus, Ziontific has put together the following acts for a unique blend of Reggae, Funk and Conscious Hip-Hop to kick off your summer right. Some will be groovin’ on the new Late Night Indoor Lodge Stage each night until the early morn. 10 Ft. Ganja Plant headlines the fest along with Roots of Creation, Bumpin Uglies, and the Elovators. Old favorites like the Alchemystics, Dub Apocalypse, and Danny Pease & the Regulators return as well. Other bands on the lineup include Double Tiger, Sun-Dried Vibes, The Late Ones, Tropidelic, Funky Dawgz Brass Band, The Problemaddicts (backed by Soultree), Oogee Wawa, Big Ol’ Dirty Bucket, Root Shock, Rhythmic Circus, Woody & the Rebel Alliance, Kroma Kode, I-ganic Sound System, The Change Up, Soultree, Total Collision, Rhythm Inc, Essonite, DapperascaL, Icculus, Supernothing, UZOO, Viva La Hop, Trouble City All-Stars, Yesai, Slurp, Slack Tide, Over The Bridge, Cabin Fever, Fresh Perspective, STL GLD, Elephants Dancing, Joe Sambo, Rice: An American Band, Terrafunk, Ali Kat & The Revelators, Keepers of the Vibe, Chris Jacques Trio, Pi Wrecks, Pier Ave, DJ Slipwax, Wiki Good, Buddahfly, Delish Music, Baylen & Philly G. . . and more! Listen to the Alchemystics’ and Keepers of the Vibes’ sets at StrangeCreek 2018 HERE. In the band members’ own words, 10 Ft. Ganja Plant was born from a desire to play the only music most of us knew how, and to water the tree that had borne each of us such abundant fruit, and yet in the summer of 1999, seemed in danger of disappearing from the world… Roots Reggae. Being collectors of the music, we sought out many pieces of vintage equipment to make these records. At the time, most of us were out touring for several weeks at a time with John Brown’s Body. We would get off the road and run to the studio, which at the time was called “Mang Studio”, or, as some of us called it, home, and try out ideas for new songs. Throughout the summer’s long, sweltering sessions, we would frequently take breaks, hitting the rooftop to get a breath of fresh air and watch and wait for the next track to begin to materialize, usually right out of the thick air. Then back down to put it to tape. Raw.” They’ll bring the realness in mid-June- don’t miss it! For nearly a decade now, Bumpin Uglies have been playing their brand of groove-heavy jams – a curiously fun mix of ska, Reggae and good ole’ punk rock – all while putting strong lyrics at the forefront of the music. It’s a formula that quickly took them from local favorites, playing around Annapolis, to a national stage. With a wildly infectious sound, tattoo-worthy lyrics and an itch to take their music to the masses, the band piled into the van years ago and have rarely seen home since. Check out the review of DPR and Bumpin Uglies at Gateway City Arts back in February HERE. 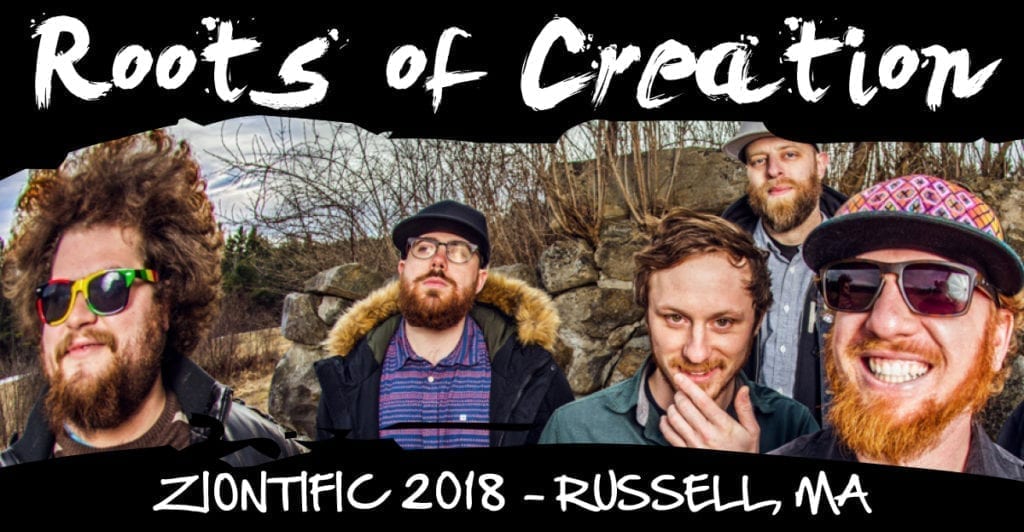 Returning to the Ziontific stage, Billboard and radio chart topping, award-winning, international reggae-rock sensation Roots of Creation are a touring powerhouse. Whether on the festival circuit, performing at jam and reggae-rock favorites like Camp Bisco, Gathering of The Vibes, California Roots, Jungle Jam and Closer to the Sun, or sharing the stage at sold out shows with some of their diverse influences including Slightly Stoopid, The Wailers, and Michael Franti, reggae/rock/dubtronica band Roots of Creation(RoC) offers up a high-energy, infectious live music experience. Their mix of reggae riddims, conscious lyrics, spirited horn lines, and electronic beats makes crowds move and has their loyal underground fan base (RoC Family) and street team (Universal Soldiers) travelling the distance to pack venues from coast-to-coast. Hailing from Boston, Massachusetts, original Reggae Band The Elovaters have been bringing their distinctive beach Reggae sound to fans and music lovers up throughout the United States. The group’s following has continued to grow as they introduce songs from their new record “The Cornerstone”, released on the band’s own imprint Belly Full Records. The release (titled for the band’s previous name), debuted at #5 on the ITunes Reggae charts and #9 on the Billboard Reggae Charts, while the video for one of the album’s featured tracks titled “Sunshine”  received more than 100k views on Facebook, and continues to be an anthem for youthfulness and summer fun. From the YouTube channel of Collected Culture: https://www.youtube.com/watch?v=gE4njf3zXHU The opportunity to wine and dine with the bands on this lineup is causing VIP Upgrades to fly off the shelves. Ziontific VIPs receive the same royal treatment as Artists- actually, strike that. Ziontific VIPs receive the same treatment as Artists as far as food, beverages and access, plus VIPs score a Canvas Tent with cot in the new VIP Camping Village, shared VIP electricity access, free showers in the exclusive VIP Shower House. Ziontific is among the few festivals in the region to host a Wellness Village that truly brings your mind, body and soul on a spiritual journey. This year’s workshops include but are not limited to: Sound Meditation Concerts, Reiki, Despacho, Fire Circle, various Yoga classes, multiple Meditations, Self and friends massage guidance, and so many more. All are inclusive with a festival ticket. Another amenity Ziontific is packing up and trucking along to the new venue is their second to none kidZone. The kidZone at Ziontific is going to give the scouts a run for their badges. This year’s schedule is jam-packed with activities from Field Day games to Kids yoga, Music lessons to Dreamcatcher and Hula Hoop crafting, Painting to Scavenger Hunts and sev

eral open tables of on-going crafts daily. In addition to the youngsters, Ziontific’s kidZone has become popular in the teen community with their “Counselors in Training” Program. More teens than ever before are signed up to be Counselors in Training this year. All kidZone activities are included with a festival ticket. Kids 11 and under are free (as well as Counselors in Training). Strangers Helping Strangers will be running a food drive at Ziontific to benefit the local community. Non-perishables, toiletries, baby and feminine product donations are greatly appreciated. The team has set a collection goal of 500 lbs. Ticketing tiers range from $50-$160. Visit www.ziontificproductions.com for current Advance Ticket rates and VIP Upgrades. Join the Ziontific Community on Facebook (www.facebook.com/ziontific), Instagram (@ziontific) or Twitter (@ziontific) to stay up-to-date on Festival information. To submit a review or story for consideration hit us at [email protected] Check out the Live Music News and Review.com Facebook page for updates and announcements.