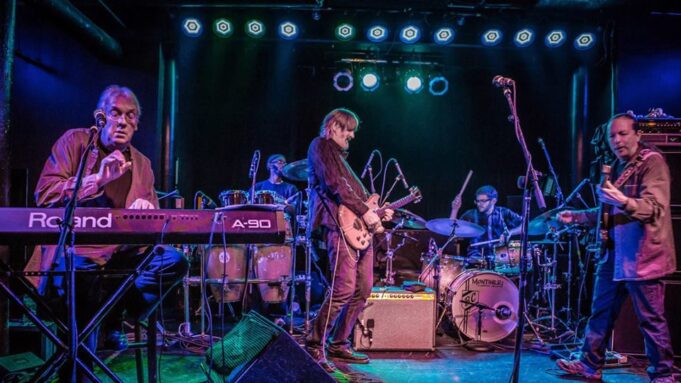 From the outside, a casual fan of Max Creek might lament that the band didn’t break out onto the national scene.  They certainly have the chops to do it, but by whatever series of circumstances, Max Creek never got their “big break.”  As I waited for Creek to take the stage, it occurred to me that while national and international musical acclaim is the goal of any musician or band, for the diehard Max Creek fan, they are exactly where they need to be.   I recalled a scene in The Beatles Anthology, once the Beatles became famous and stopped playing in their hometown, a Liverpudlian fan was interviewed and she was begging the world to give her and her friends their band back.  I wonder if the hippies of Haight-Asbury felt the same way when the Grateful Dead left the San Francisco scene for larger audiences.  While all fans of Max Creek would wish to see them succeed and take their place in the national jam band scene, Creekers can still feel a bit of selfishness, because Creek is still “their band,” New England’s band.

This spring will mark the 47th Creekiversary of the band and they’ve begun 2018 on fire.  The Met was packed with fans.  As usual the crowd spanned generations, proving that like many jam bands, the music is timeless and you’re never too young or too old to appreciate the Max Creek vibe.  This show opened with Scott Murawski performing Cruel World and the band was off and running. Some highlights of the evening include Blood Red Roses, from their Drink the Stars album.  I really like when they play this classic song live.  The crowd really responds and it becomes a fan sing-along during the chorus.  During the second set, Jamemurrell “Jay” Stanley, came out from behind his kit and proceed to take the mic to sing Into the Ocean.  Later in the evening Creek pulled out a cover of Sly and the Family Stone’s Thank You followed by The McCoys Hang on Sloopy  followed by Bertha, a song combo I wouldn’t in a million years expect, but nonetheless- it worked to perfection.

This show had more than its fair show of covers aside from those mentioned previously.  While casual fans might expect a Dead song or a classic rock number, the band busted out with a wide variety of material including songs by Allen Toussaint, Little Feat, and even Chuck Berry.  What more can I say about this band, other than that I am glad they are our own.  After a full weekend of Max Creek in the Providence RI area, the band will hibernate for a little while before returning for a full Vermont weekend in early March.  And then April will see the band playing four anniversary shows.  Thanks to Mike Camp for recording the show: