Now that we have gone from a weekend filled with Peachy craziness, our reporters have a chance to sit down and write actual reviews.  Here is the second one, by Ryan O’Malley of Friday at Peach.

The threat of rain lead to heavy rumors and concerns about Friday, with it being one of the stocked days of bigger named artists at Peach. The standard questions of “will they cancel the day?” or “will the shows be postponed?” seemed to dominate the conversation before the music even began.

Luckily, by the time acts like Bobby Lee Rodgers and Elise Testone started, the skies were crystal clear and people started to enjoy the music rather than worry about the rain (it’s Northeast Pa after all, and, you know, rain happens). On the Grove Stage, Holly Bowling delivered a beautiful set full of her solo piano renditions of Grateful Dead and Phish songs.

Since bursting onto the national scene a few years ago with her intricate version of what has become known as the Tahoe Tweezer from Phish, Bowling has garnered high praise from both member of Phish and the Dead, and even had the chance to perform with Dead bassist Phil Lesh at his venue Terrapin Crossroads.

The Dead’s music was the blueprint for her performance at Peach as she opened with a trippy “Help On the Way>Slipknot,” before sandwiching “Estimated Prophet” in between Phish’s “Free.” Another Phish cut, “Divided Sky” lead into the ending sequence of “Cassidy,” “Slipknot,” “Franklin’s Tower.” Afterwards, Bowling received a huge ovation from the large crowd, some of whom were probably seeing her for the first time.

On the Mushroom Stage, guitar virtuoso Steve Kimock brought along some friends for a fiery set of blues and funk. Frequent collaborator Leslie Mendelson added some beautiful vocals to cuts like “Friend of the Devil” and “Waiting On a Friend.” Kimock’s son, John Morgan

Kimock, showed why he’s one of the best drummers on the scene with some tight rhythms while Dead keyboard ace Jeff Chimenti added brilliant fills throughout the energetic set, which also saw Kimock pay homage to his days with the band Zero by breezing through a crisp “Cole’s Law.”

Following the Kimock and Friends set, God Street Wine – an outfit that has been frequently “reuniting” for brief runs – delivered a fun set of old fan favorites like “Waiting For the Tide,” and “Goodnight Gretchen.” A short time into its set, GSW welcomed one of its former members, Peter Levin, to the keyboards for a fantastic take on “Drive West.” The duel lead guitars of Lo Faber and Aaron Lieberman lead the ensemble through some exploratory jams and had the crowd dancing for most of its set.

Almost immediately after the GSW set, the inevitable rain started which caused many people to flee the Mushroom Stage in search of dryer grounds like under the pavilion at the Peach Stage where the Magpie Salute put in one of the best sets of the day.

Check out the extensive gallery of Peach photos by Ryan O’Malley and Eric J Simon here.

Anchored by former Black Crowes members Rich Robinson, Marc Ford and Sven Pipien, the group devoted most of its set to Black Crowes songs including a guitar driven “My Morning Song.” Although the Crowes have had many incarnations over the course of their career, most fans feel that the Robinson/Ford co lead guitar era was the pinnacle of their career. Like many other times the song was played, “My Morning Song” showcased how brilliant the two guitarists can be when they lock in to each other’s musicianship.

The set also included a Ford cover, “Shalimar Dreams,” a nod to the Rolling Stones with a run through “Tumbling Dice,” and a scorching version of Humble Pie’s “30 Days in the Hole.” Enticing one of the biggest sing alongs of the day, The Magpie Salute kicked into the familiar opening of the Crowes “Wiser Time” before getting the crowd moving with a spot on rendition of the jammy Crowes staple “Jealous Again.” To end their set, the band broke into the fan favorite “Remedy.” Although the song is one of the Black Crowes biggest hits and has been played thousands of times, the guitar work of Ford brought the song new life.

For those who braved the storm, Pigeons Playing Ping Pong brought some serious funk to the rain-soaked crowd at the Mushroom Stage. Prior to the rain, Keller Williams Kwahtro was faced with technical issues on the Peach Stage as a power outage occurred and the stage crew rushed to fire up the generators in the mean time. Rather than miss their set, the foursome delivered an acoustic set which found Williams, Rodney Holmes and Mike Dillon playing percussion. Dark Star Orchestra, who are celebrating their 20th anniversary, took the stage in the early evening and delivered a trippy set of early Dead. Rather than recreate an actual show, DSO utilized the Dead’s template from the 1968/1969 era and brought with some solid versions of “The Other One,” “St. Stephen,” “The Eleven,” and “Turn On Your Lovelight” which showcased keayboardist Rob Baracco, who also included a nice improv vocal jam reminiscent of how Ron “Pigpen” McKernan would do it with the Dead.

From the video channel of EasyMorningRebel665

Friday’s headliner was alternative rockers My Morning Jacket, who made their debut at Peach and managed to bring their own fan base, many of whom purchased single day tickets for Friday only. Other people were still unfamiliar with the outfit, but were praising the high energy loud rock the band brought to the fest.

Singer Jim James is not only an engaging front man, but is also a monster on guitar as was evident in songs like “Compound Fracture” and “I’m Amazed.” Later in its set, MMJ went on a cover song barrage beginning with a reworked version of Bob Dylan’s “Blowing in the Wind.” The version would most likely annoy Dylan diehards, but his music has always been open to interpretation, and MMJ did just that.

Continuing the cover binge was the band’s debut of the Allman Brothers Band gem, “Melissa,” which bled into another debut, a tender take on George Harrison’s “All Things Must Pass.” After the death of Prince in 2016, MMJ would frequently throw his material into their set list, and Peach was no different as the band broke into the slow jam “The Beautiful Ones,” which was yet another debut. “Touch Me, I’m Going to Scream Pt. 2” served as a nice catalyst for “One Big Holiday” which brought the energetic 19 song set to a close.

Late night Friday proved to be a tough choice for fans as the funky horn sound of Lettuce took the Peach Stage for a set which included a guest cameo from funk icon Chaka Khan on a few numbers including her smash hit “Tell Me Something Good.” Over at the Mushroom Stage, New England based fusion band Pink Talking Fish delivered a unique set as the performance was billed as a special performance of the Allman Brothers Band landmark album “Eat a Peach” intertwined with the music of Pink Floyd, The Talking Heads and Phish. It was a concept that worked perfectly and had people buzzing the next day.

Check out the extensive gallery of Peach photos by Ryan O’Malley and Eric J Simon here. 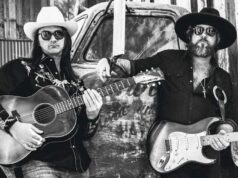 Live Music News & Review was born out of a love of live music and the wish to chronicle the amazing shows happening around the country. Stories and reviews are born both from our editorial board and from readers just like you around the country.
Contact us: lmnandr@gmail.com
5,745FansLike
209FollowersFollow
296FollowersFollow
6SubscribersSubscribe