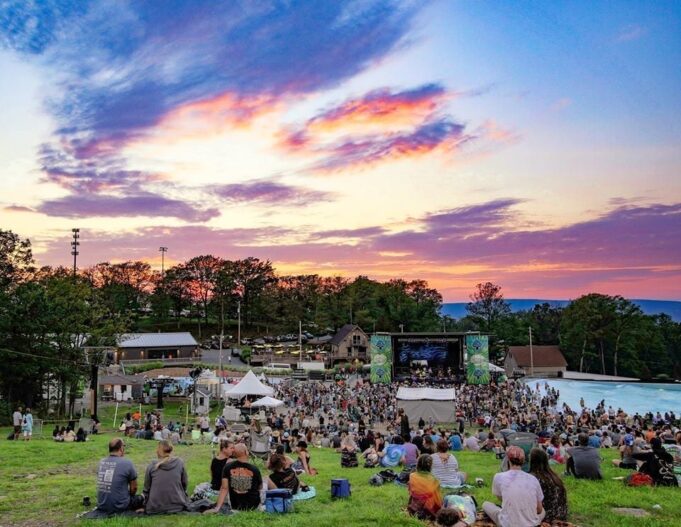 The third day of Peach was a music lovers dream, with everything from bluegrass and Americana music to New Orleans funk and a touching tribute to two music legends we lost this year. Pulling double duty on Saturday was Cabinet, who performed an early afternoon VIP set on the Grove Stage which was billed as Cabinet and Friends. The partial lineup featured Pappy Biondo on banjo and vocals, his cousin JR Biondo on mandolin and vocals, and bassist Dylan Skursky.

The fun jam session included runs through “On and On,” “Long Journey Home,” and “Oh, Darlin” before it concluded with a lively “High on a Mountaintop” which saw a slew of people join the guys on stage including members relatives, food vendors, and people who were seeing the band for the first time. It was almost a recipe for disaster, but the band and its fans made sure everything went off without a hitch. Later at shortly after midnight, the full band put in a rocking set on the Mushroom Stage that focused on their more upbeat bluegrass cuts like “Old Farmer’s Mill,” “Po’s Reel,” and “Celebration.”

A mid afternoon highlight – if not a highlight of the entire festival – took place with an all star tribute to late Allman Brothers Band and Peach Festival co-founders Gregg Allman and Butch Trucks. The core lineup for the tribute included Allmans alumni Jack Pearson, Oteil Burbridge, Marc Quinones, Duane Trucks, Jaimoe, Pat Bergeson, Lamar Williams Jr., and musical director Chuck Leavell. After a brief speech, Leavell broke into the familiar countdown of “one, two, three, four,” that symbolized the start of the ABB staple “Statesboro Blues.” It was a fine rendition that saw some brilliant slide guitar work from Pearson and shared vocals from Williams and Leavell.

Allaman’s son Devon emerged for a fiery take on “One Way Out,” another staple of the ABB catalogue. Devon Allman has made scarce public appearances as of late, so his appearance at Peach was hyped, and the young singer-guitarist did a fine job adding some fluid guitar work and snarling vocals to the bluesy jam. The night’s headliners, Widespread Panic were already on site, so Leavell introduced Panic guitarist Jimmy Herring and bassist Dave Schools who joined for a jammy rendition of the slower “Dreams.”

One of the biggest surprises occurred when Duane Betts, son of Allman Brothers co-founder Dickey Betts, came out for a drawn out run through the instrumental juggernaut “Jessica,” a track co-written by his father. Following an early 2000’s split Dickey Betts and Gregg Allman had a feud that lasted many years, so seeing someone from the Betts family honoring the legacy of the two fallen musicians was a warming experience. Betts stuck around for bluesy interpretations of “Ain’t Wasting Time No More,” “Midnight Rider,” “Stand Back,” and “Southbound,” the latter of which also featured young blues guitarist Marcus King.

Long time Allman Brothers Band guitarist Warren Haynes took the stage to loud applause and lead the ensemble through a tight “Come and Go Blues” before eliciting one of the biggest pops of the day with the instantly recognizable beginning to “Whipping Post.” After a rich “Yield Not to Temptation” that was dedicated to the late Col. Bruce Hampton, the band welcomed Valor Trucks for the finale, a perfect take on “King Grand.” It marked the conclusion of a wonderfully arranged tribute to the band that was the nucleus behind Peach Fest and redefined what Southern blues is all about.

Haynes’ band, Gov’t Mule, made a strong appearance on Saturday for a set billed as “Gov’t Mule and Friends featuring John Scofield.” Before Scofield emerged, the four piece ran through some blistering blues cuts including the title track to their latest album, “Revolution Come, Revolution Go.” After introducing Scofield and welcoming Marcus King, the lineup breezed through an extended “Can’t You See” by Grand Funk Railroad. Next, Haynes welcomed Chuck Leavell and Jack Pearson for a scorching rendition of “Soulshine” which has become a staple of Haynes’ performances. ABB percussionist Marc Quinones joined the fun for a take on Scofield’s “Hottentot,” and “King of Bird.” As a final surprise, Haynes welcomed Widespread Panic’s Jimmy Herring and John Bell for a jammed out cover of Neil Young’s “Cortez the Killer” which proved to be a festival highlight.

Over on the Mushroom Stage, New Orleans funk institution Galactic delivered a mesmerizing set full of the funk, rock and heavy grooves that have defined their career for over a decade. Drummer Stanton Moore is an absolute beast behind the kit and adds some of the funkiest drumming you will ever hear to the groups unique sound. As part of their recent tours, Galactic has added another New Orleans native, vocalist Erica Falls, to their lineup which adds some powerful soul filled vocals to the mix. In one of the most anticipated appearance of the festival, Southern jam rock stalwarts Widespread Panic made its debut at Peach Fest by closing the first of two nights. While Panic is huge in the South, the band is hit or miss in the northern states.

For their first appearance at Peach, people raved about how tight the band was on songs like “Love Tractor,” “You Got Yours,” and “Pilgrims.” Drummer Duane Trucks locks into tight grooves while guitarist Jimmy Herring uses brilliant fills to guide the music to explorative areas, and bassist Dave Schools lays down some intricate low end rhythms. Vocalist John Bell has one of the most unique voices in the jam scene, and while many people have their opinions of his voice, he sounded as crisp as ever at Peach.

From the video channel of Masteryeager.

Understanding that people may not know all their material, Panic mixed in a decent amount of cover material into their Saturday set, including “Waitin’ For the Bus” and “Jesus Just Left Chicago” by ZZ Top.

For their run through “Surprise Valley,” the band welcomed Brandon “Taz” Niederauer, a 14 year old blues guitar phenom who is lighting up the modern blues scene. Niederauer shredded brilliantly on the Panic staple, and earned a gleaming smile from both Bell and Herring, who both seemed to be in awe of the young virtuoso’s impeccable talents. Welcoming Marcus King to the stage, Panic ended the set proper with rollicking takes on Robert Johnson’s “Me and the Devil Blues,” and a dance friendly “Life During Wartime” by the Talking Heads. Fittingly, the encore was a spot on rendition of Warren Zevon’s “Lawyers, Guns and Money,” which turned out to be the perfect ending to an almost perfect day of music on the mountain.

From the video channel of Michael Sylvester.