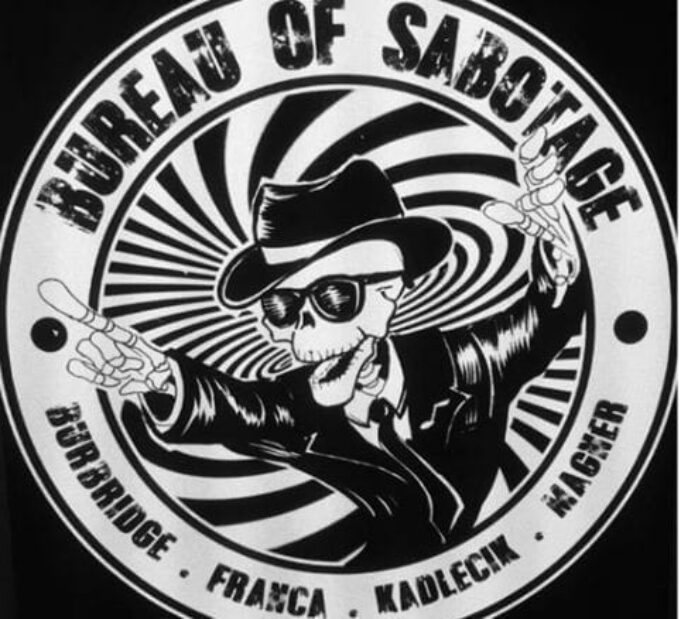 some additional reporting by Alan Powell

The Bureau of Sabotage is now open. In two shows over the last few days a new band was formed with shows thousands of miles apart.

John Kadlecik, someone who seems to love forming bands more than anything else, took the opportunity to create a band at Gypsy Sally’s in Washington DC while the nation was inaugurating a new president. That band brought together several musicians who may have met at last year’s Jungle Jam in Costa Rica in Kadlecik (Dark Star Orchestra, Golden Gate Wingmen, Furthur) on guitar and vocals, Oteil Burbridge (Aquarium Rescue Unit, the Allman Brothers Band, and Dead and Company) on bass and Jeff Franca (Thievery Corporation, Congo Sanchez) on drums, all who were in attendance last Spring in Jaco, Costa Rica. Joining them was Aron Magner (Disco Biscuits) on keys.

Check out the article on the winter tour plans for John Kadlecik here.

Check out the article on FEB tour dates for Golden Gate Wingmen here.

From the youtube channel of Tracy Steck.   Help on the Way into Franklin’s Tower.

The Washington DC show came about as a bit of an Irish wake for Democracy, in a city that was over run by the Presidential inauguration.  The show included a John Kadlecik Acousti’Lectric mini set, a set by Joe Uehlein Trio, plus a set with David Gans which included some guest appearances by Kadlecik.  This all topped off by the Bureau of Sabotage set.

I traveled down to DC from Upstate New York to see the BuSab show. While it’s a long drive, I wanted to support the event and. quite honestly, I hate to miss the incarnation of a new band with John in it.

The show started with a very short solo set by John. This gave way to a fairly long set by the U-Liners and then a set by David Gans. John’s solo set was great but I would have liked for it to be longer. The U-Liners are fun and their set was enjoyable. I like David Gan’s music quite a bit and his set was excellent. John joined him for a couple of songs. It was great to hear them do Down to Eugene together. As John pointed out , they are probably the only two musicians who do the song.

After a break, the Bureau of Sabotage took the stage. Their set turned out to be really fun and well worth driving down for. I was at an American Babies show last summer that Oteil joined in for and I was impressed. He appears to genuinely enjoy playing with new people and he again reflected this with BuSab. Everyone in the band played well, but I was especially impressed with John and Oteil – both were “on” the whole set. I’ve largely viewed Oteil as a traditional bass player, setting down the rhythm, but at this show he was doing some lead guitar/bass riffs that reminded me more of Phil Lesh. The set was largely based on Grateful Dead material. I would have liked to have seen them do some of John’s originals but given the limited rehearsal time, I fully understand,. That being said, they did some great jams during the set. Feel Like a Stranger, for example, was quite jammed out and had a Dancing in the Streets instrumental in it as well as Easy Answers riffs.

In the end, I came away impressed and everyone else appeared to be too. They were very tight and played well together, escpecially considering this was their first gig. I hope to see more this lineup in the future.

Joe Uehlein Trio: Deal     The World Turned Upside Down (by The Diggers)    The Ghost of Tom Joad (by Bruce Springsteen)      Three Chords and the Truth (by Ry Cooder)      Vigilante Man (by Woody Guthrie)      License to Kill (by Bob Dylan)      Coalminers (Sarah Ogun Gunning)  Redemption Song (by Bob Marley)      What’s So Funny ‘Bout Peace, Love, and Understanding (Nick Lowe)
David Gans *w/John Kadlecik Gypsy Sally’s in Washington, DC
Box of Rain      Life Is a Jam     Norwegian Wood      An American Family      Friend of the Devil (w/Nick Newlin)        It’s Gonna Get Better (w/Nick Newlin)       New Speedway Boogie* > With a Little Help from My Friends* (coda) > New Speedway Boogie* >     Down to Eugene*     Brokedown Palace*
Bureau of Sabotage – John Kadlecik, Oteil Burbridge, Aron Magner, and Jeff Franca
Shakedown Street (JK)      We Can Run (JK)        Tough Mama (JK)          Loose Lucy (JK)      Cats Under the Stars (JK)        Feel Like a Stranger* (AM)         Lady with a Fan > (JK)        Terrapin Station > (JK)      Dark Star > (JK)       Stella Blue (JK)     Help on the Way > (JK)      Slipknot! > Franklin’s Tower (JK)
E: Bertha
* w/Easy Answers and Dancing in the Streets teases Scrivener/Turtle
UTAH
A few days later the band took the stage at the Cabin in Park City Utah while that city was exploding with their annual Sundance Film festival. That show started as an Oteil and Friends show and when it became clear that the same exact musicians were available a sequel was born. It was not really until Burbridge introduced the band after their second song that it truly became a Bureau of Sabotage gig.

It’s hard to say when the Bureau will once again be investigating jams and sabotaging convention. Luckily there were some folks around recording the action.

Recordings of the Utah show are here.  These were recorded on mixlr’s Blue Faerie.

Check out the Dark Star from the youtube channel of Gunnar Hanson.

Cats Down Under the Stars

Sugaree   (with John Popper on harmonica)

set ended with some technical challenges

Help on the Way into

Check out the article on the winter tour plans for John Kadlecik here.

Check out the article on FEB tour dates for Golden Gate Wingmen here.