I got there early enough to set up my taping equipment and mingle with the kind folks at the venue.  The first set was great, a scorcher just as much as the second set.  The band came out swinging, sounding tighter than ever. The first thing I noticed was that Todd Stoops (Raq, Kung Fu) was playing keys.  Cleaning Windows, a Van Morrison tune, was the opener, sounding natural and clean.  Golden Wings was next (a John Kadlecik original), and that was a great song as well.  They Love Each Other came in third, and the audience was really into it by then.  Good Shepherd, a Jefferson Airplane song, was played fourth, much to my delight.  That song’s vocals are held down by bassist Klyph Black (Zen Tricksters, Jam Stampede).  I’d heard it before and knew all the lyrics, but had never seen a band perform it live. An upbeat, somewhat fast Sugaree followed Good Shepherd, and people were singing along enjoying themselves. Upon the Lowland Sea was next, and I really enjoyed this one.  John reached all the high notes in the song, singing like a sailor about the Sea.  This song is as old as the hills, but made into a modern John Kadlecik Band song.  Crazy Fingers and Train to Cry were the closers of the first set, played superbly by a top notch band.

John and the boys came in hot for the second set, with After Midnight being the opening song.  Played in a similar way to the Jerry Garcia Band version, but with a little more energy.  Stoops and Kadlecik took turns soloing during most of the songs.  And what an amazing keyboardist Todd Stoops is.  He was doing some really cool stage tricks with his two boards that made for a funky, complex sounding show.
The Harder They Come originally by Jimmy Cliff was another highlight of set two.  The old Jimmy Cliff tune was revived, and John must have really enjoyed it because he sang the lyrics twice.  Fire on the Mountain was grand to see, with all the wah pedal and funky organ sounds one could handle.
Y.M.M.V. was a song that was rarely played, and I had a few folks ask me after if they could hear it (after I got home).  Unfortunately, my taping of the second set did not come out well.  On the bright side, there was another taper there who will be posting set two sometime soon.  Throwing Stones and Not Fade Away were the closers, and When I Paint my Masterpiece was the encore.
All in all it was a great show, and I can’t wait to see John with the Golden Gate Wingmen.  But by far this was the best lineup I’ve seen for John Kadlecik Band.  Tour dates can be found at www.johnkmusic.net and I included the audio from the first set.  I felt this show was too sacred to take videos at, and I took no pictures either.  It was a packed house so they wouldn’t have turned out good anyway.
Audio available here:
https://archive.org/details/2016-5-19JohnK.BandWoodlandsTavernColumbusOhioSetOne

To Submit a review or story for consideration hit us at lmnandr@gmail.com Check out the Live Music News and Review.com Facebook page for updates and announcements. 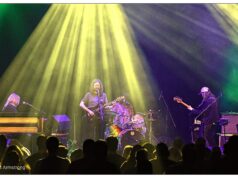 The Medicinal Purpose at Hawks and Reed-March 2nd, 2018