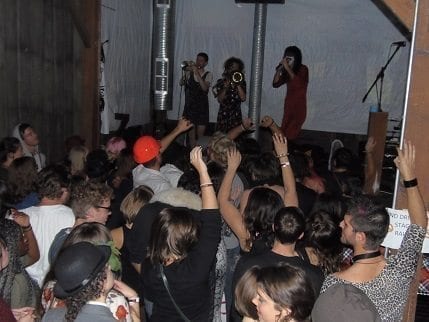 So it’s been six months or more since I was introduced to Northampton’s newest flavor, Bella’s Bartok.  I will try not to spend a lot of time describing them as there is a lot of reviews from the last six months here at Live Music News and Review.com   This show was kinda special though as it is Devil’s Night, All Hallow’s Eve Eve and this time frame is really Xmas, NYE and Halloween all wrapped into one for Bella’s Bartok.  We got there plenty early and the crowd was already gathering and everyone was in full costumed regalia.

Up first was the Mary Jane Jones.  I’m not sure if this was an expanded version of the band, but it featured horns and a fully costumed band.  This was the final show of their guitarist Dan Thomas who will be spending his spring pursuing his masters degree.  The band sounded great and is clearly an amazing vehicle for their singer, Mandy Pachios.  She is a belter for sure, and that is not to diminish her skill and dynamic abilities.  The band ranges from jazz to soul to rock and they focused more on their rock and roll side because of the coupling with Bella’s Bartok.  They sounded great, and below is four choice tracks from the back half of their show.

Audio:   just use the arrows to scroll through the songs. 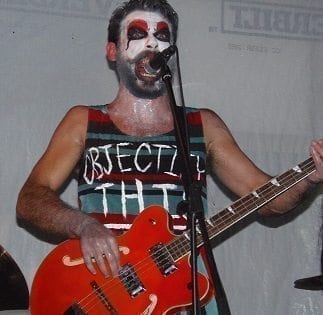 Bella’s Bartok took the stage after a short break and announced themselves as Stella’s Bartok and the band was all dressed in drag, but not the pretty frat party drag that of course you wouldn’t expect from them anyway.  There was a nightmarish take to all of them of course.  Lead singer Asher Putnam was dressed more as a fortune teller look, bass player Dan Niederhauser’s dress was adorned with the words Objectify This painted on the front.  It was a bit of a scene from A Nightmare Before Christmas with these guys.  So it was perfectly appropriate that they opened the show with a song from that soundtrack, This is Halloween.  Of course they put their own spin on it, and their ability to deliver munchkin like vocals was super fitting.

The band let unfold one after another song after song, and the energy level of the place ebbed and flowed but never really dipped below what would be the peak of any other band’s performance.  Lots of Bella’s favorites coming out one after another.  They pulled Mandy from the Mary Jane Jones up to sing a song, and while one might expect a guest vocalist to handle a cover with a band she sang a Bella’s original normally voiced by guitarist Chris Kerrigan.  He spent his free time playing guitar in the middle of the crowd.

The line between stage and audience is blurred during a Bella’s show, and this night was no different.  Performers and 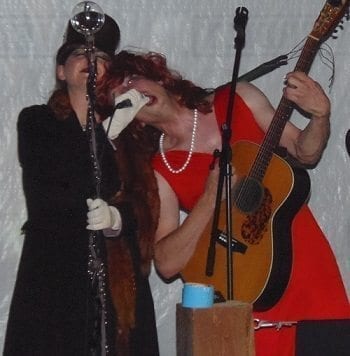 audience members were decked out to the nines, with lots of drag from both genders, a crazy Wednesday and Pugsley Adams, I spotted of course a member of the Village People (constructions worker), as well as PeeWee Herman.  There were lights and video projections, with lots of freak show old school footage being projected along with a constant theme of fire visually-  the band was in silhouette against the images, and you could see them shadow jumping all over the stage.  The effect was intriguing and you had the feeling you were at a party where really anything might happen. The night was just a blast for sure, precisely what you’d expect out of Bella’s Bartok to end a ghoulish October.

AUDIO:  just use the arrows to scroll through the songs.

Below is some video and indeed it is dark, but it will give you an idea of the mayhem that unfolded that night from stage and within the audience.