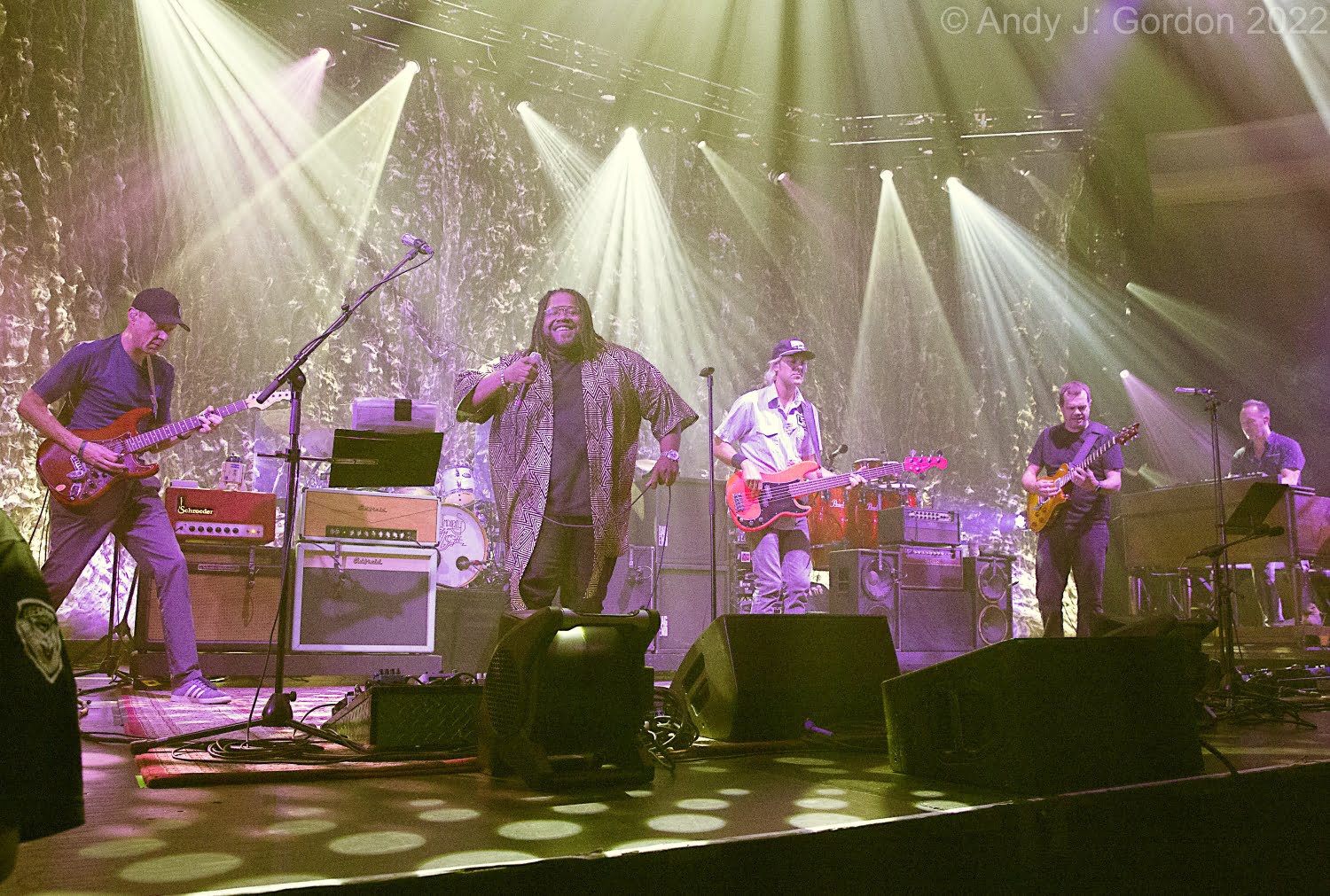 The Main Squeeze’s Maximillian Newman and Ben “Smiley” Silverstein tore up the opening set with furious solos on guitar and electronic keys respectively. Corey Frye’s vocals were powerful and silky as the band put on a tight, high energy, five song performance. “Whiskey, Wine and Cocaine” had a catchy and thumping beat, while “Sun Goes Down,” from their 2022 release “To Be Determined,” featured a deep bass intro by Rob Walker and a heavy metal guitar solo by Newman. That new song allowed Frye to really show off his pipes. An exhilarating version of “Have a Cigar” by Pink Floyd had the crowd up and cheering as Silverstein and Newman played off each other to finish their successful performance.

Umphrey’s McGee had not been back in Los Angeles since 2019. Lead vocalist and guitar player Brandon Bayliss acknowledged this when he said, “Thank you very much; it’s been way too long.” The crowd agreed as they yelled out and cheered wildly with each song the band performed at the Palladium. The band’s unique blend of progressive rock, metal, electronica, jazz fusion and extended instrumental jamming was on full display during their show. While Bayliss usually plays rhythm and lead guitar, his foray at the keyboards next to Joel Cummins was an unexpected treat during their opening set.

“Bad Friday” was a mega jam near the end of that first set with both Cinninger and Bayliss blasting complementary guitar solos. Umphrey’s McGee brought out The Main Squeeze’s frontman Corey Frye to sing the first set closer, a great cover of Prince’s “I Want To Be Your Lover.” Frye danced to the music between stanzas and his ear to ear grin reflected the feelings of the crowd as the set concluded.

The second set was built around “All In Time,” one of their deep tracks that dates back to 1998. Before that song, Cummins did a long, melodic piano intro leading into “Liberty Echo.” Cinninger’s masterful finger tapping journey up and down his fret board transitioned into the first exploration of “All In Time.” Bassist Ryan Stasik performed a heavy, thumping solo and Cinninger’s creative soloing followed. Cinninger also teased Marshall Tucker Band’s “Can’t You See” before revisiting the “All In Time” riff. Eventually, the song segued to the catchy “Small Strides,” the single from their new 2022 studio album “Asking For A Friend.”

More trippy keyboards, Cinninger solos and fast bass lines highlighted “Push The Pig” and the instrumental “It Doesn’t Matter.” Kris Myers’ drums, Andy Faraq’s percussion and Stasik’s bass joined forces for a delicious rhythm romp before Cinninger played a solitary solo that transitioned back to the final version of “All In Time.” Bayliss played an intricate guitar solo before he and Cinninger returned to the familiar riff to end the set.

“Mulches Odyssey,” from the 2004 album “Anchor Drops,” was their one song encore, featuring Cinninger on lead vocals. Stasik played a fast bass solo and Cummins laid down a heavy organ accompaniment. Cinninger and Bayliss played corresponding solos during the heavy, psychedelic instrumental adventure that concluded the band’s masterful performance.

I Don’t Know What I Want

I Wanna Be Your Lover
(Prince cover) (with Corey Frye)