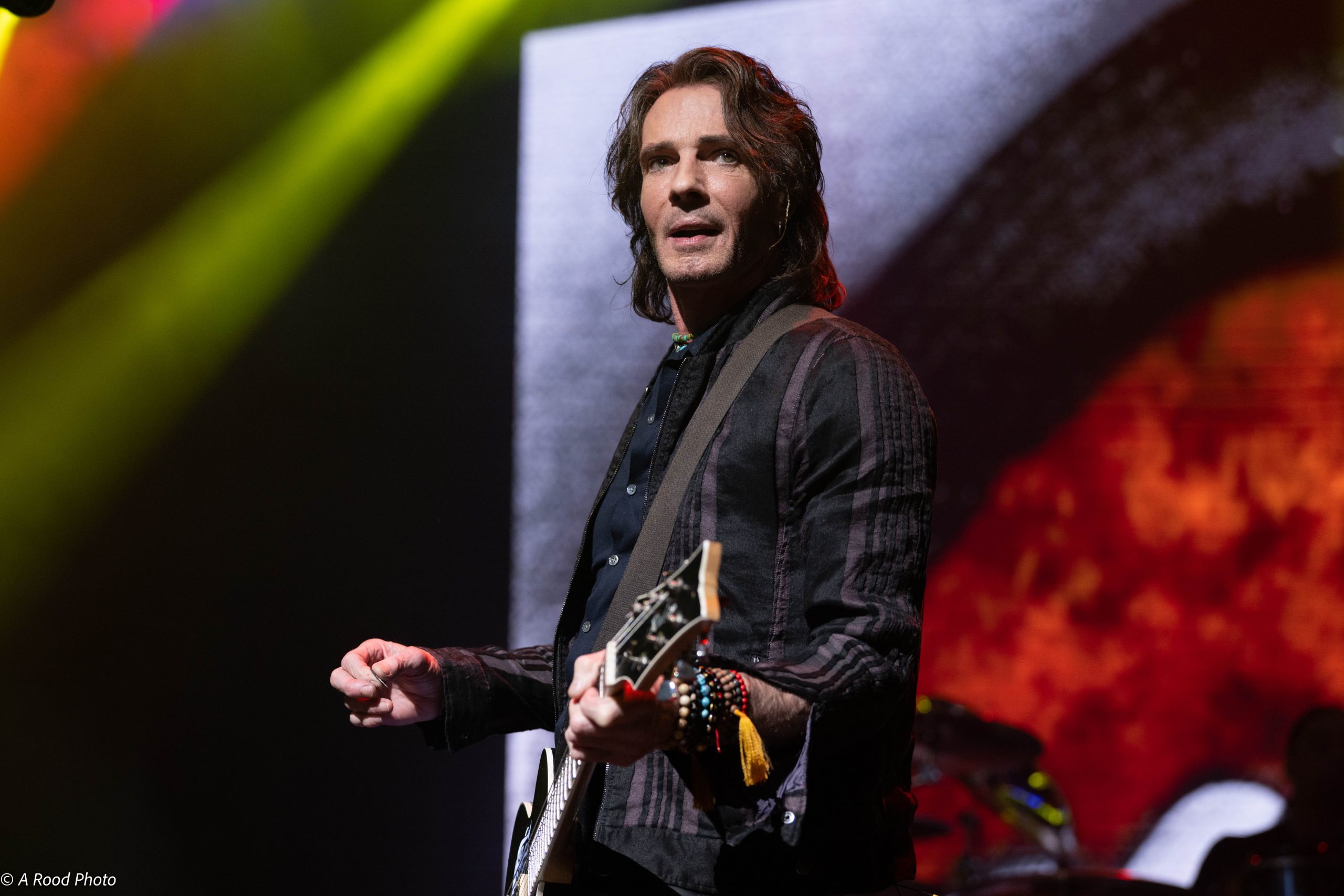 The Youtube theater in Inglewood CA welcomed these troubadours of the 1980s on August 30 2022. Words by Lawrence Mann with images by Stevo Rood.

Last night was my first time visiting the YouTube Theatre.  My first impressions were that it, along with the SoFi Stadium, has beautiful grounds and architecture.  The vibe was similar to the Microsoft Theatre, very nice, but sterile.  The staff was extremely helpful and nice.  I hadn’t experienced so many smiles at a venue before.

The lineup consisted of John Waite, Men At Work and Rick Springfield.

John Waite was unfortunately hindered by sound issues.  His monitors weren’t working and the drum kit was mixed in too loud.  He managed quite well performing songs from the Babys, Bad English, his solo career and a blistering cover of Led Zeppelin’s “Whole Lotta Love.”

When I see you smile (Bad English)

Next up was Men At Work.  I was looking forward to seeing them since I saw lead singer, Colin Hay, perform solo to a crowd of 25 people at Genghis Cohen.  Men At Work is one of those bands that once they start playing, you realize that you know a lot more of their material than you anticipated.  Highlights were, It’s A Mistake, Down By The Sea and Be Good Johnny. Before playing their biggest hit, Down Under, Colin mentioned that he wrote the song in 40 minutes and it has kept food in his mouth for the past 40 years.  He was extremely funny, sarcastically stating that “as you can see, it is the original band” following up with “I didn’t leave the band, they all just left.”

Down by the Sea

I Can See It in Your Eyes

Who Can It Be Now?

There are two types of Rick Springfield fans.  The first type will tell you that he is a great guitarist and can write a catchy pop song, but are embarrassed to admit how much they like him.  The second type are unabashed, die-hards.  I fall into the second category.  My love for Rick started with his 70’s Saturday morning cartoon Mission Magic, continued with his early 80’s albums and his role as Dr. Noah Drake on General Hospital, then being an extra on the movie Hard To Hold and finally on his later material and his autobiography Late, Late At Night.

Let start with stating the obvious, the man has held up better than most.  He just celebrated his 73rd birthday!  The entire room sang him happy birthday.  He wore skinny black jeans, has a full head of rock length hair and when he took off his shirt for the encore, was in better shape than men half his age.

His set consisted of hits from a different periods in his career.  He included a medley of roughly 12 songs so that everyone had the chance to hear at least a snippet of his biggest hits.  I especially appreciated hearing the Sammy Hagar penned I’ve Done Everything For You, I Get Excited, Love Is Alright Tonite, Don’t Talk To Strangers and the song he wrote to help with his depression, World Stop Turning.

He concluded his set with his biggest hit Jessie’s Girl.  The large screen behind him showed the song’s use in television shows such as the Office, Glee and Two And Half Men interspersed with the original video.  Everyone sang along at the top of their lungs.  It was a joyous occasion.  A middle-aged female fan jumped on stage and put her arm around Rick as he sang.  The security guard had a tough time escorting her off stage because she had latched onto his guitar strap.  It shows that there are no signs of his fandom wavering.

The mostly 50 something crowd left with smiles on their faces, some still singing. It was great seeing many old rock t-shirts that I haven’t seen in thirty plus years.  After nearly two years of lockdown, this event was highly needed and appreciated.

I’ve Done Everything for You
(Sammy Hagar cover)