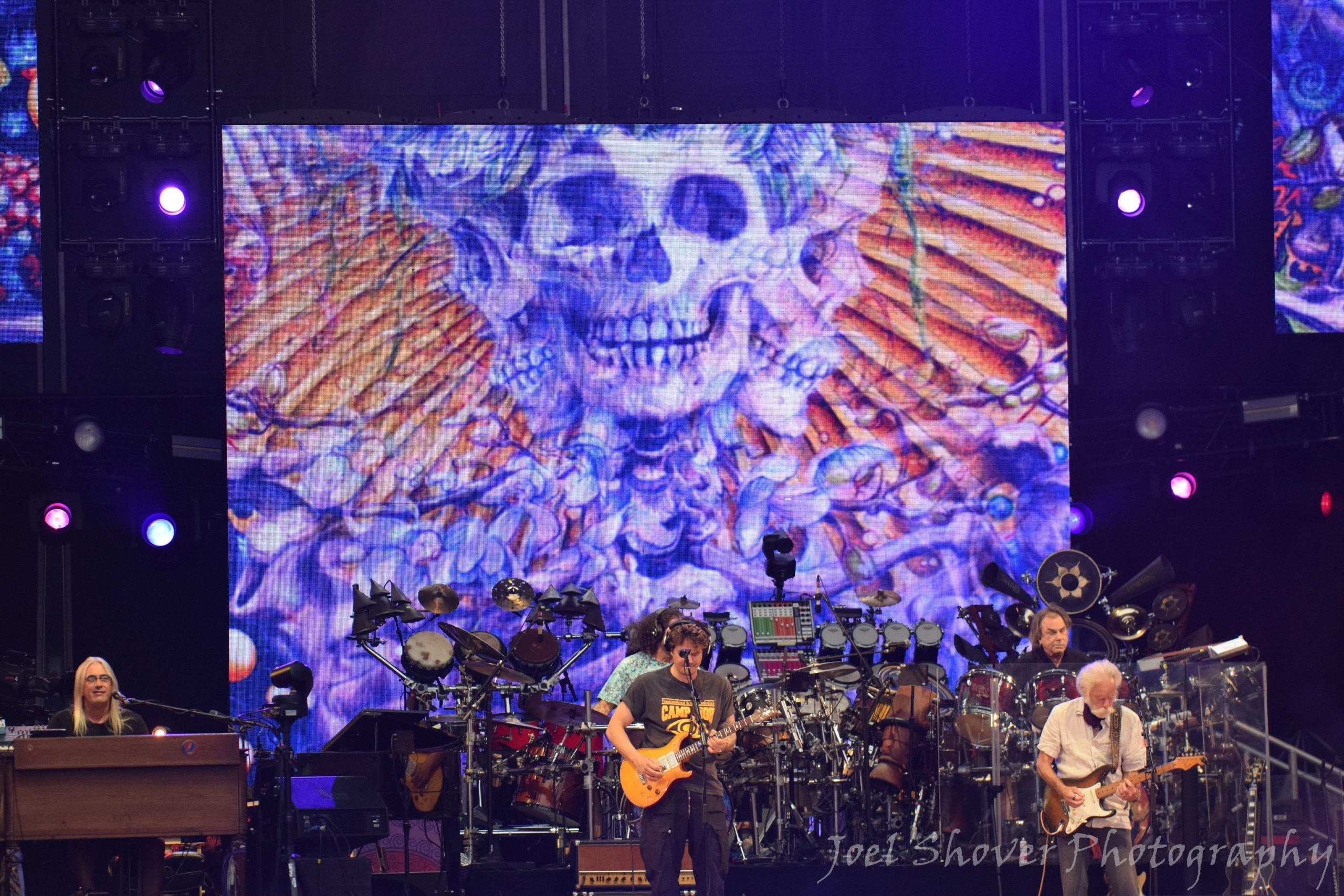 “Ran Into a Rainstorm“

Saturday’s sweltering New England temperatures had to give way for mother nature’s rain, and she was not playing’ in the band, as the fans all found when the first set of music was cut to a short two song set. This was my first visit back to Foxboro, MA to see the Dead, (in any form) in 11,676 days.

The band hit the stage just after 7pm with a jumping “Cumberland Blues” to get the crowd started then it was right into the famed “Bertha.” It was not until John Mayer sang the powerful lyrics “Ran into a rainstorm” and the crowd erupted into a complete severe thunderstorm. Deadheads have wondered for years how it is the band controls the weather. Lightning strikes nearby forced evacuation of the open stadium. The band decided to have their set break now instead of later and the fans were in for one hell of treat.

Check out this extensive gallery of photos from this day by Joel Shover here.

830pm brought on the start of the second set as the beautiful cloud filled colorful sunset filled the sky. There was love in the air and it was “Good Lovin“ that started the second set that would become a historical marathon of music. The band slowed things down a bit and performed the intricate choice of “Crazy Fingers” sung by Bob Weir. Mayer then took the reins and led the band into a rocking “Mr. Charlie.” The crowd the ignited to another level when the first notes of “St. Stephen” were played as it segued right into “The Eleven“. By this point everyone had forgotten the rain! “Brown Eyed Women” was the next tune picked from the immensely large catalog of songs. It is always so wonderful to watch the methodical bass playing from Oteil Burbridge, he makes it look to easy all the time and he is always so happy.

The band must have seen the post about 11,676 days ago because they went back to 1990 with a steady grooving “Estimated Prophet” that led right into a bouncing “Eyes of The World.”

It was now time for “Drums and Space“ led by the great Mickey Hart and his planet of drums along with longtime friend and colleague Jay Lane as the rest of the band took a short break. Mickey Hart can still play “The Beam” and transform you to places in your mind and soul that you never thought existed. The band dusted off the old Traffic tune “Dear Mr. Fantasy” and wasted no time flying right into the Beatles famed song “Hey Jude.“

Any fans that forgot about the rainstorm were soon reminded by the soothing sounds of “Morning Dew.” The crowd erupted again in full force and danced and twirled to the sweet sounds. It was time for Bob Dylan’s’ “Knockin on Heavens Door.” This show was by far anything but “One More Saturday Night” for Dead and Company as they weathered the storms and brought change to the challenges, we all face.

Get out and VOTE!

Till The Next Show………. Joel

Of note: Bill Kreutzman did not join the band on this night, and the second drum throne was occupied by Jay Lane, who has been guest appearing with Dead and Company throughout this tour. Jay Lane is well known to Dead fans from his days in Ratdog, and his current position in Bob Weir and Wolf Bros.

Check out this extensive gallery of photos from this day by Joel Shover here.