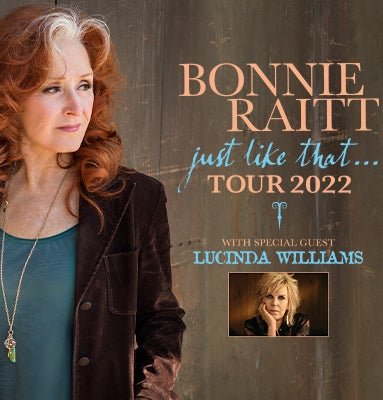 “I’ve never appreciated a tour more than this one.” – Bonnie Raitt

On a Wednesday night in the summer of 2022, the touring gods saw it fit to bring two titans of music together at the Tanger Center in Greensboro. Starting off with the resilient Lucinda Williams, stepping on stage to a warm reception, “Thank you for being here tonight. I love to be in Greensboro.” Williams had played the nearby Carolina Theatre of Greensboro numerous times over the years. Today, she came to the new Tanger Center as part of her first ever tour with Bonnie Raitt.

Coming into today’s performance, Williams was still working through the challenges of suffering a stroke in November of 2020. She had a bit of help to the stage and did not pick up the guitar during her set. It didn’t matter. Her voice sounded strong as she led the four piece band through numbers paying tribute to the “beautiful misfits” she had met throughout her life. “Drunken Angel,” “West Memphis,” “Lake Charles.” Stories of yellow El Caminos, Boudin and running from the police. Of gun violence, depression and resiliency. And just like that her set came to a close with the familiar “Joy,” led off stage with a warm smile to a standing ovation.

“This is a beautiful hall. Congratulations on this new place.” Bonnie Raitt took the stage with a new album Just Like That… for the Greensboro crowd as well as constant reminders how nice it was to be back touring. Starting off with the album’s first track, “Made Up Mind,” “When We Say Goodnight,” and “Blame It On Me,” before getting into the story behind title track. A song she says was written after her close friend John Prine had passed away.

“When I was putting words to this, John was in my heart.” The narrative of the song tells the story of an organ transplant recipient who invites the family of the deceased to place their head on his chest to hear their son’s heartbeat. Heavy material that ended with Raitt finishing the song with her head down, seemingly moved in that moment. “Everyday is a chance to get it right.”

This was followed shortly after by the familiar slide riff of the familiar “Let’s Give Them Something to Talk About” and the surprisingly upbeat number “Livin’ For The Ones” also off the new album. The number reflects a theme throughout Raitt’s set, “We’re livin’ for the ones who didn’t make it.”

After an excursion into the reggae dub number “Have a Heart,” Raitt pointed to the Ukrainian Flag adorning the drum riser. “We keep the Ukraine flag here so we can hold those folks in our heart.” As the set wound down, Raitt sat down by herself with the trademark big body acoustic guitar stating, “I’m going to sing this song for John (Prine) for the rest of my life” before blessing the mostly hushed crowd with a rendition of the timeless anthem “Angel From Montgomery.”

Throughout the show security monitored the crowd to ensure the no cell phone policy was enforced. That was until the final notes rang out of “Not The Only One,” Raitt exclaimed “Ok now you can take a picture.” On cue, hundreds of phones rose in the air to take a blurry, low res image of the legend. You better believe, I did too.

It must also be noted, the first tour I’ve seen in many years where the tour t-shirts were only $20.

This is Daniel Schram’s first article with us. BE LIKE DANIEL! To submit an article an article or review, or to just say hello hit us at [email protected]

Dan Schram is a folklorist based out of North Carolina. Check out his video channel here.