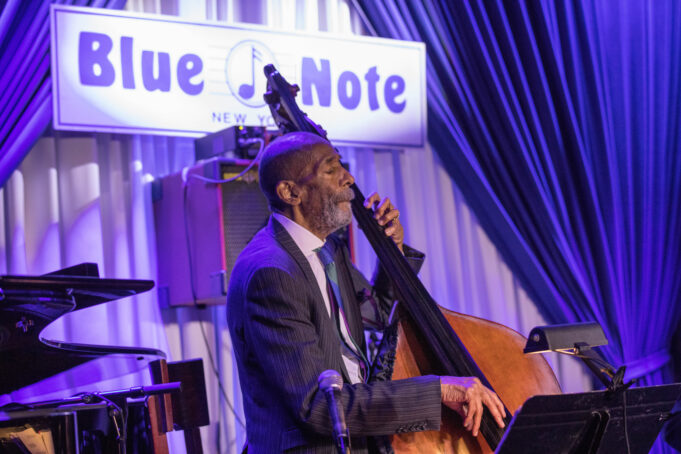 On May 4th Jazz legend Ron Carter will turn 85 years old. In advance of a birthday celebration that will take place at Carnegie Hall on May 10th, Carter completed twelve shows at the Blue Note in New York. For this set of shows Carter played with his Golden Striker Trio that includes Russell Malone (guitar) and Donald Vega (piano). The group, which Ron Carter first put together with pianist Mulgrew Miller and Russell Malone for an album recorded for Blue Note in 2002, takes its name from a composition by pianist and Modern Jazz Quartet co-founder John Lewis.

The trio has been playing together since Mulgrew Miller’s passing in 2013 masterfully presents some of the most intimate and melodic jazz and their set includes Carter originals and timeless classics. Carter is one of the most dignified and elegant musicians you will ever encounter both in his presentation, demeanor and musicianship. Dressed in dark suits, starched white shirts and matching silk striped ties, Carter spoke to the audience in a soft voice that with few words communicates the respect and reverence he has for the proceedings, the music and his fellow musicians.

A full gallery of photos from this show by JD Cohen is located here.

The small but iconic Blue Note jazz club has been entertaining crowds since its inception in 1981 and the room was jam packed for the 10:30pm final performance of a five-night run that ran March 22-27. The audience was tremendously respectful and attentive to every note the band played. Aside from the sound made from constant flow of servers delivering food and drinks to the overcrowded tables they sat spellbound by the trio’s masterful interplay and the delicate beauty of each composition. Carter directed his fellow musicians- changing the pace or initiating a solo with subtle looks and gestures that were often barely noticeable.

The set concluded with the signature jazz classic, “My Funny Valentine” that highlighted Donald Vega’s piano playing, which perfectly compliments the mood created by Carter and Malone.

When the set was over Carter, Malone and Vega exited the stage with the same undrstated elegance and class with which they began the evening, little fanfare but leaving no doubt to fans that they were in the presence of a true master.

You get the impression Carter doesn’t mince words or suffer fools, but he is generous with his talent as evidenced by the line of fans, acquaintances and musicians lined up outside his dressing room after the show. Carter made time to meet and speak with each one individually.

Having appeared on more than 2,000 recording sessions, the most-recorded jazz bassist in history, Carter’s stature as a jazz musician is unmatched. But it isn’t until you get up close and personal that you experience just how imposing his 6’5 frame, and distinguished features are. Carter is a true jazz giant and his talent continues to impress.

A full gallery of photos from this show by JD Cohen is located here.