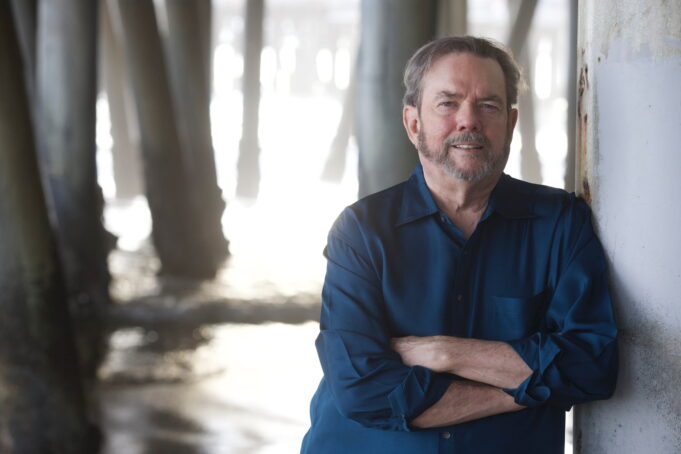 Legendary songwriter Jimmy Webb captivated an enthusiastic, capacity audience at the Bull  Run in Shirley, MA, (March 31), performing many of the smash hits he wrote for other  artists in the1960s and regaling the crowd with entertaining stories about the writing of the  songs and about the superstar artists who recorded them.

Webb, 75, is best known for writing hits for artists such as Glen Campbell, Judy Collins and  actor Richard Harris, to name a few, Among his biggest hits were “By the Time I Get to  Phoenix,” “Galveston” and “Wichita Lineman,” all for Campbell, “Up, Up and Away” by the Fifth  Dimension and “MacArthur Park” for Harris.

Webb, admittedly, isn’t much of a singer. “My next album will be all piano music, so I can charge  more because there is no singing,” he joked. “I don’t by any stretch of the imagination consider  myself a singer,” he said.  Still, he sings with passion. And it is always interesting to see how the writer would sing the  songs he or she has written for others to record.

And his piano playing is simply exceptional. He started “MacArthur Park” with a extended piano  intro that had the crowd on its feet.

Webb started the evening off with “Up, Up and Away,’” recorded by the soul group The Fifth  Dimension, released in 1967. “The country was in turmoil over the Vietnam War and other social  issues, and I was writing a story about a balloon, “ he joked.

He then moved into “Highwayman,” a huge hit for The Highwaymen, who were comprised of  Willie Nelson, Johnny Cash, Waylon Jennings and Kris Kristofferson.

He recalled running into his friend Jennings backstage at a show and told him he had won a  Grammy for “Best Country Song.’’  “Which country was that?” quipped Jennings.

Later he sang “If You See Me Getting Smaller,” the title derived from a comment Jennings made  to a TV cameraman who kept badgering him to move his spot on the stage. Finally, Jennings  walked off, saying “if you see me getting smaller, I’m leaving.”

He told a story about when his son told him he had heard his song “Do What You Gotta Do” that  day on a contemporary music station. Webb said he was incredulous. Then his son said it was  by Kanye West, who put a hip-hop beat on it. Webb said he had never given permission for  West to use the song. After some back and forth between his agent and West”s, Webb settled  for 45 percent of the royalties.  “Forty-five percent of a Number One hit for doing nothing isn’t bad,” he noted.

Despite having a reputation for writing squeaky clean pop songs, Webb was actually a long haired hippie with counter cultural views and a penchant for doing drugs, hanging out in  Hollywood with the likes of John Lennon and Harry Nilsson. He had tried and failed to have a  career as a rock artist. He said he has now been completely sober for 25 years.

He talked a bit about his friendship with “Mr. Sinatra,” saying that despite his reputation, “he was  always a prince to me.” Sinatra had recorded “Phoenix” after Campbell did. He ended the set with a stunning rendition of “MacArthur Park.”

Webb returned for an encore of “Wichita Lineman,” a song that Bob Dylan has said may be the  greatest song ever written. He then walked off to an extended standing ovation.

Up, Up and Away

If You See Me Getting Smaller

Do What You Gotta Do

The Moon’s a Harsh Mistress

Michael Lasalandra is a music fan and an artist who paints portraits of musicians, among other  subjects. His work may be seen at mlasalandra.com