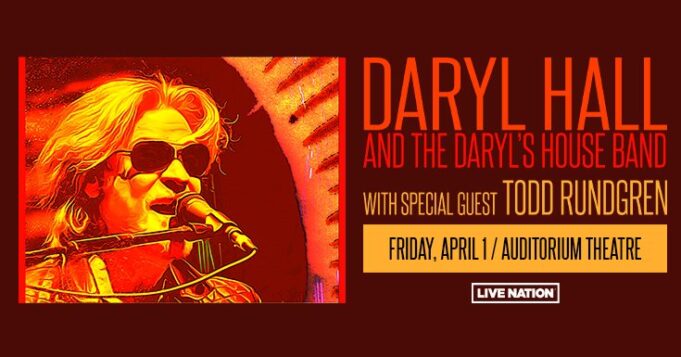 I have been waiting for this show since I heard the announcement that Daryl Hall & Todd Rundgren would be touring together.  This show was all the more exciting because it was the opening night of the tour at the Chicago Auditorium Theater. This theater has so much history since it was built in 1889 it would be impossible to count how many shows have occurred here.  I have witnessed so many myself over the last 40 or so years. This room has the most amazing sound and architecture and is a must see if you have never seen a show in Chicago, IL.

The curtain opened with Todd Rundgren playing with The Daryl Hall band backing the venerable songsmith.  Rundgren opened his show with the song “Real Man.”  What a way to start a show with music’s renaissance man.  Rundgren kept the show moving on with the performance of some of the hits the launched the career of Todd Rundgren became throughout the 70’s.  “We Gottta Get You a Woman,”  “I saw the Light,” and “Hello it’s Me” delighted the crowd.

The audience is now warmed up so Rundgren changed the tempo with “UnLoved Children” frin the early 90’s.  This backing band is so tight! Todd returned to his roots in Philly Soul with “I’m so Proud/ Ooh Baby” and “La La Means I Love You.” Then it was time fro my favorite song of the night, “Sometimes I Don’t Know What to Feel,”  Rundgren then followed up with a little Marvin Gaye, “I Want You” before finishing with “The Want of a Nail.” This man sure knows how to move the crowd, and showed why he was chosen as this show’s opener!

Love of the Common Man

It Wouldn’t Have Made Any Difference

We Gotta Get You a Woman

I Saw the Light

Sometimes I Don’t Know What to Feel

I Want You (Marvin Gaye cover)

The Want of a Nail

Daryl Hall came out of the gate with a song choice that was a bit of a subtler moment but very much established the Philly soul sound that would be the hallmark of his career and this show, “Dreamtime.” This was my first time seeing Daryl Hall’s soul show so I didn’t know what to expect. Hall then broke They broke it open with “I’m in a Philly Mood” followed by a personal favorite “Sacred Song” from Hall’s first solo record, Sacred Songs. I have always enjoyed one of Hall & Oates first hits “Sara’s Smile.”  It really fit the mood of the night !

I have to say again this the band was so very tight and very visually pleasing with their performance.  The show closed with Todd Rundgren coming back onstage with Hall  to do three songs: ”Can We Still Be Friends” being a highlight of the encores for me.  These two stars do so well at accenting each other, both from Philly and have been friend for many decades,  and the audience could tell that there was a real love and admiration for one another.  This is exactly what a pairing of two great artists is supposed to be.

I left the theatre truly satisfied that all my emotions were electrified. If you need a musical fix to steer your soul this show will treat you well.

Problem With You (Daryl Hall solo)

I’m in a Philly Mood

Expressway to Your Heart (The Soul Survivors cover) (with Todd Rundgren)

To submit an article an article or review, or to just say hello hit us at lmnan[email protected]