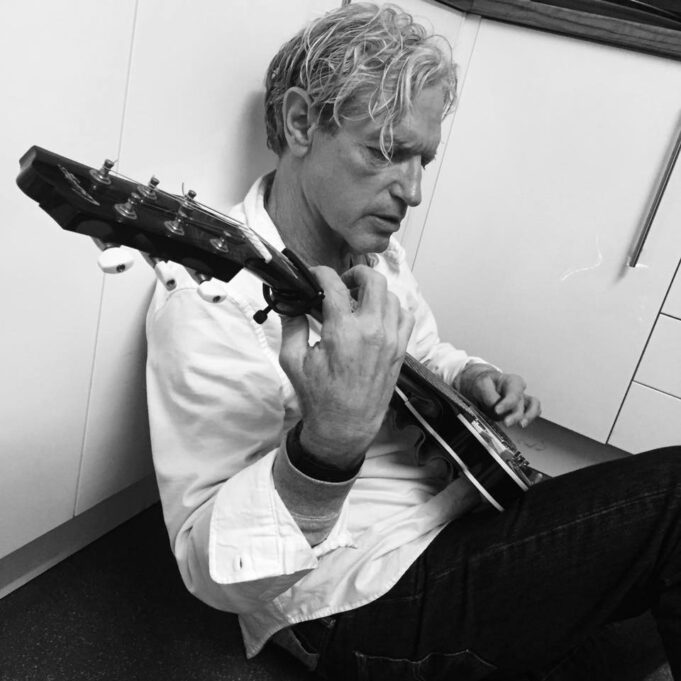 Texas singer-songwriter-guitarist Sam Baker kept a full house at Club Passim in Cambridge spellbound for two hours (April 2) as he and two accompanists provided what could only be described as a spiritual experience, playing 20 of his quirky, beautiful, poetic, sad songs during a stop on a rare New England tour.

Baker admits that his singing is only mediocre and his guitar playing even less so. But the fact that Baker is able to sing and play at all is a miracle. In 1986, Baker, now 65, was traveling by train to Machu Picchu when a bomb placed by terrorists on a luggage rack above him went off, killing seven passengers, including three who were sitting in his section, and left him near dead.

He suffered brain damage, a cut artery, and severe eardrum damage. He was saved by strangers and remained hospitalized for months, undergoing many surgeries. Today, he is partially deaf and wears hearing aids. His left hand was mangled. But he managed to learn to play guitar left-handed, so he could form chords with his right hand, and started writing poetry that he put to music and has become a cult favorite in the Americana-folk world.

Most of his songs are sad, but not melancholy or maudlin. They reflect the experience of being human, good and bad. Many of his songs reflect gratitude and positivity in the face of darkness. “I was saved by a thousand people,” he said. “There is such goodness in the. world.”

Between songs he joked and laughed and always had a smile on his face. There were no tears in the crowd, just laughs and smiles. Only one of his songs, “Broken Fingers,” specifically dealt with the bombing and its aftermath. It talks about watching a little boy sitting next to him die and being unable to help. “I don’t ever forget his face,” the lyrics say. “Some things don’t heal.”

Other songs include one, “Same Kind of Blue,” about a returning Vietnam vet who could not live without the adrenaline rush of war. Another “Waves,” is about a widower who walks down to the beach every morning and writes his wife’s name in the sand, only to see waves wash her name away.

Another song talks about an orphan’s plight, while yet another details a Mennonite boy who leaves the group and hooks up with a sexy girl. “Who’s to say what love is,” the song says. The song “Say Grace” was about a girl who was abused by her boss.

“Okay, that’s it for the happy songs,” he joked. “I told you to get ready, it’s gonna be a sad night.

In reality, though, it was anything but. His sweetness, optimism and expressions of love saw to that.

As for the music, Sam’s limited guitar skills were helped along by violinist Tim Lorsch, while his vocals, as much spoken as sung, were smoothed out by background singer Ashlie Wallace, who complimented him perfectly.

His last song, prior to the encore, was “Go in Peace.”

Go in peace/ go in kindness/ go in love/ go in faith/ leave the day/ the day behind us/ day is done/ let us go into the dark/ not afraid/ not alone/ let us hope/ by some good pleasure / safely to/ arrive at home.

After the show, I went up to talk with him and said I felt I had just had a religious experience. I asked him if he believes in God.

Michael Lasalandra is a music fan and an artist who paints portrait of musicians, among other subjects. His work can be seen at mlasalandra.com